US, Europe mull sanctions on Russia over Aleppo

The United States and Europe are considering additional economic sanctions on Russia over its role in the Syrian regime's assault on Aleppo. 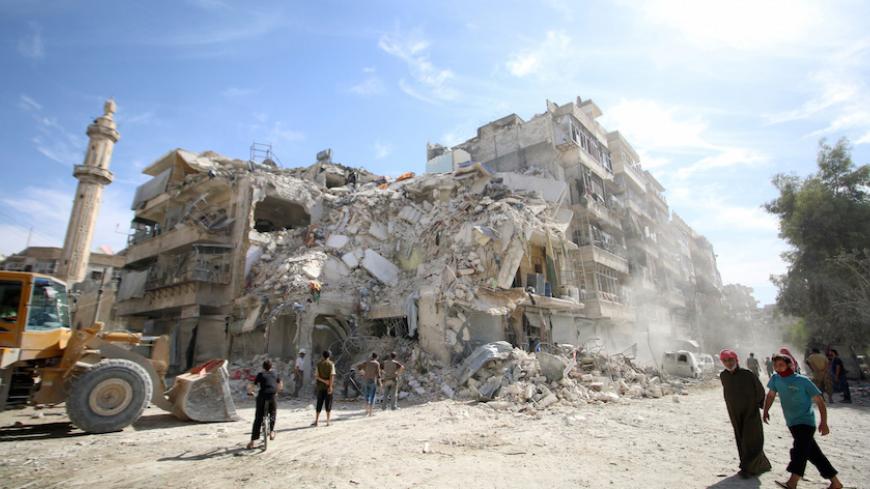 WASHINGTON — The United States and Europe are mulling additional economic sanctions on the Bashar al-Assad regime and on Russia for its role supporting the Syrian regime's assault on rebel-held eastern Aleppo, as the prospect of direct US military action to coerce an end to the bombardment recedes.

“Let me make it clear: We are considering additional sanctions,” Secretary of State John Kerry said at a news conference in London Oct. 16. “President [Barack] Obama has not taken any options off the table at this point in time. So we’ll see where we are in the next few days in the context of the discussions we’re having.”

“I think the most powerful weapon we have at the moment is our ability to make President [Vladimir] Putin and the Russians feel the consequences of what they are doing,” British Foreign Secretary Boris Johnson said at the news conference with Kerry, after hosting a meeting on the Syrian crisis with European, Turkish and Arab ministers.

“And there are a lot of measures that we’re proposing to do with extra sanctions on the Syrian regime and their supporters, measures to bring those responsible for war crimes before the International Criminal Court,” Johnson said. “These things will eventually come to bite the perpetrators of these crimes.”

Kerry said there had been candid discussions and new ideas but no apparent decisive breakthrough at a 4½-hour meeting in Lausanne, Switzerland, Oct. 15. The meeting was held with the foreign ministers of Russia, Iran, Saudi Arabia, Turkey, Qatar, Egypt, Jordan and Iraq, as well as UN Syria envoy Staffan de Mistura.

“I would characterize this as … a brainstorming and a very candid first-time discussion," Kerry said of the Lausanne meeting. “A number of ideas came from the number of different ministers, as we hoped that might be able to shape some different approaches."

The Lausanne meeting focused on ideas for getting a cease-fire in Aleppo and getting humanitarian aid convoys in without being attacked, and on whether al Qaeda-linked Jabhat al-Nusra (Jabhat Fatah al-Sham) should leave the city before or after a cease-fire, Turkish Foreign Minister Mevlut Cavusoglu said.

“There were different opinions in the meeting. Some said that first al-Nusra should be gone and then the cease-fire could be settled. Others said the cease-fire should be declared first so that the opposition groups can separate themselves from al-Nusra, and then other terrorists would leave the region,” Cavusoglu said at a news conference Oct. 15, the Turkish newspaper Hurriyet reported.

“But all the attacks of the regime targeting moderate opposition groups should also be stopped immediately,” Cavusoglu added.

“It’s a twin-track strategy,” Johnson said Oct. 16. “We need to see if we can get the terrorists, al-Nusra, identified in Aleppo. … But that does not mean we should in any way relent in our pressure on the Assad regime and its supporters, particularly, obviously, the Russians and the Iranians.

On Oct. 17, Russia announced plans for an eight-hour “humanitarian pause” in strikes on Aleppo for Oct. 20, during which it said two corridors would be available for armed opposition fighters and civilians to leave the city.

“I guess we will see,” Toner told journalists at the State Department press briefing Oct. 17. But it’s “a bit too little, and too late.”

Despite US and Western outrage over the Russian and Syrian bombardment in Aleppo, the Obama administration is unlikely to pursue direct military action against the Assad regime, such as standoff strikes on Syrian aircraft, US military analysts and Western diplomats said.

“Barring a black swan event, such as a Srebrenica-style massacre in east Aleppo, the administration is going to try to use nonkinetic levers of influence to push both Russia and the Assad regime to re-engage seriously in a diplomatic process,” Nicholas Heras, a fellow at the Center for New American Security who closely follows US military thinking about the Syrian war, told Al-Monitor on Oct. 17.

“The issue at hand is that the US has momentum" in the campaign to counter the Islamic State, Heras said. “The operation to seize Mosul is underway. Raqqa is being pressured from the north as well as from the east.”

He said his sense is that the Islamic State's loss of Mosul "and the beginning of the campaign to seize Raqqa would be a final exclamation point for the Obama administration’s carefully planned, phased strategy to work by, with and through local partners to defeat IS,” he said. “And that although the US has expressed shock, dismay and disgust with Russia and the Assad regime strategy toward Aleppo, they don’t see any light at the end of tunnel in the civil war.”

“The US does not want to admit publicly that the Assad regime will likely hold on to a statelet centered in western Syria for years to come,” Heras said. “And that, at best, the international community and the Syrian people are looking at a multi-year, tortured process of political negotiations and internal configuration within various armed groups on ground before any enduring and stabilizing peace plan and political transition.”

“On Syria, … we don’t expect any military move of this administration,” a Western diplomat, speaking not for attribution, said. “The signal we receive is very clear. … I believe any significant military move is very unlikely.”

“The options are quite limited right now,” the diplomat continued. “Regarding a no-fly zone, with the Russians there, what are you going to do?”

“It’s a disaster for the Syrians,” the diplomat said. “You are going to have months and years of war in Syria, till the total exhaustion of the people. I don’t see anything [halting it].”