The United States said Russia’s use of an Iranian air base to fly long-range bombers to conduct airstrikes in Syria was unhelpful, but would not derail negotiations to reach a deal on Syria. 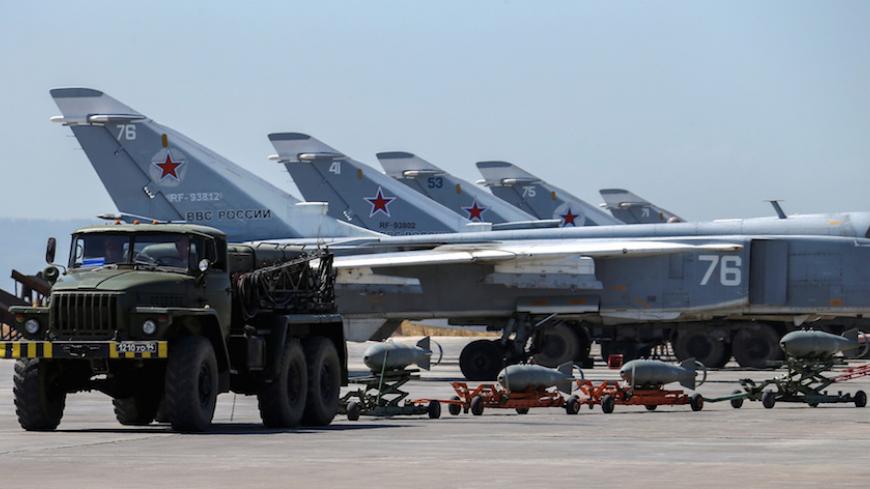 WASHINGTON — The United States said Aug. 16 it was still assessing Russia’s surprise use of an Iranian air base to fly long-range bombers to strike targets in Syria — the first known time Iran has overtly allowed a foreign nation to use its military base since before the 1979 revolution. But while the State Department called the latest developments unhelpful, it said they would not derail ongoing US-Russian negotiations to restore a cease-fire to Syria and get political talks back on track.

“I think we are still trying to assess what exactly they are doing,” State Department spokesman Mark Toner told journalists at the department press briefing Aug. 16, referring to the Russians’ use of Iran’s Hamedan air base. “It is unfortunate, but not unexpected or surprising.”

Toner said, “Frankly, that only makes more difficult what is already a very contentious and complex situation, and pushes us farther away from what we are all trying to pursue: a credible nationwide cessation of hostilities and a political process in Geneva that leads to a peaceful transition.”

“What is unclear to us right now is the extent to which they are using Iran’s [base],” Toner added. “It may be a one-off thing. … We just don’t know at this point.”

“The Russians did notify the coalition,” Col. Christopher Garver, a US military spokesman in Baghdad, told reporters at the Pentagon Aug. 16. “[They] informed us they were coming through. … We did know in time … not a lot of time, but it’s enough,” to ensure flight safety over Iraq and Syria.

But beyond the short-notice notification, US officials indicated they had not been given a heads-up about the Russian plans to use the Iranian air base near Hamedan to carry out strikes in Syria, which they suggested was prepared only in the past days. The Russian bombers that took off from the Iranian air base returned to Russia after conducting their mission in Syria, media reports citing US officials said.

Iranian officials barely acknowledged the Russians’ use of their base, suggesting they were nervous about public sensitivity to any perceived infringement of Iran’s sovereignty.

Asked about the official Russian Defense Ministry announcement of the use of the Iranian base, Iran’s national security adviser replied only indirectly, in what Iranian reporters said was the only official Iranian comment on the matter at all.

“Tehran-Moscow cooperation in the fight against terrorism in Syria is strategic, and we exchange capacities and potentialities in this field,” Ali Shamkhani, the secretary of Iran’s Supreme National Security Council, told the Islamic Republic News Agency Aug. 16.

The Russian use of the Iranian base is not a game changer, Ilan Goldenberg, a former Pentagon and State Department Middle East official, said.

“It is an interesting development, but not a strategic game changer,” Goldenberg, now with the Center for New American Security, told Al-Monitor Aug. 16. “Russia has certainly been expanding its reach into the region, and this is a further indicator of that. But at the end of the day, they are jointly cooperating with Iran on an issue of common interest.”

“What is interesting is that the Iranians, who have a long history of independence and suspicion of foreign interference, including Russian interference, are actually letting this happen,” Goldenberg added. “I would be surprised if it is a strategic long-term shift. Seems more like a natural result of Iranian and Russian common interests in Syria.”

US officials said they still aimed to reach a deal with Russia on Syria, but said recent developments in Aleppo, where Jabhat al-Nusra forces played a key role in helping break the Bashar al-Assad regime’s besiegement of rebel-held East Aleppo, make that even more complicated.

“I don’t see how there can be a deal when Russian and regime offensive operations in Aleppo continue,” a senior US official, speaking on condition of anonymity, told Al-Monitor Aug. 11.

“Russia continues to say we are close [to a deal], but in fact there are many issues that remain, including on how to bring down violence in Aleppo,” a second US official, speaking on condition of anonymity, told Al-Monitor Aug. 16. “[The Syrian] opposition has shown they will not stand for continued Assad regime advances.”

Toner said, “We are continuing to have those conversations [with the Russians], we continue to pursue that goal, to create a coordination cell with Russia … because we believe that is the best mechanism to get this back on track."

“I think [US Secretary of State John] Kerry got some sort of handshake, but can't make things public until this Aleppo fight dies down,” Michael Kofman, a Russia military expert at the Wilson Center’s Kennan Institute, told Al-Monitor Aug. 16. “Russia is increasingly forced to deal with IS attacks, while it still has to support Assad's forces in the battle for Aleppo.”

“It appears that as long as the Assad regime and the Russians continue to aggressively push in Aleppo, it will be hard to actually implement any agreement,” Goldenberg said. “I'm highly skeptical that there is anything effective we can work out with the Russians if there isn't also clarity on what the consequences for Russia would be if they violate an agreement.”