It seems increasingly unlikely that the United States and Russia will conclude a deal on Syria before US President Barack Obama and Russian President Vladimir Putin are expected to meet on the sidelines of the G-20 summit in China on Sept. 4. 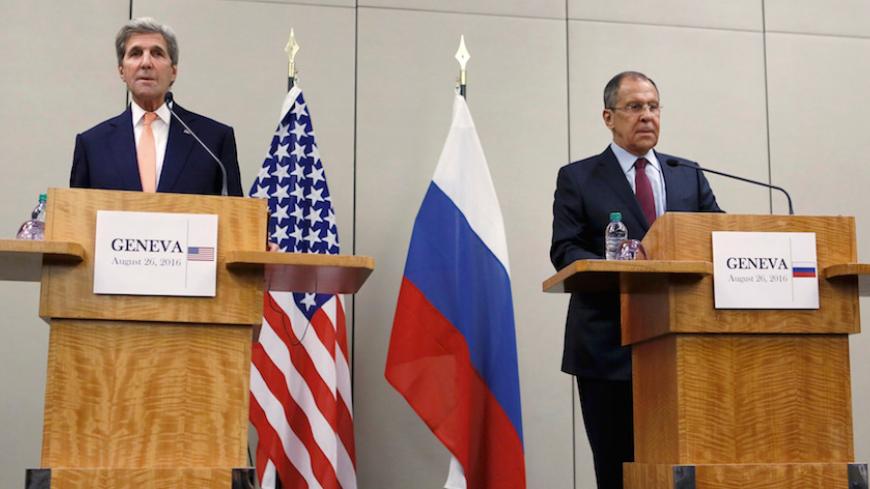 WASHINGTON — Despite US Secretary of State John Kerry and Russian Foreign Minister Sergey Lavrov's saying that they had made progress in 10 hours of talks in Geneva on Aug. 26 and that just a few issues remained to be resolved, it seems increasingly unlikely that the United States and Russia will conclude a deal on Syria before US President Barack Obama and Russian President Vladimir Putin are expected to meet on the sidelines of the G-20 summit in China on Sept. 4, and perhaps at all, diplomatic contacts said.

US-Russian negotiations in Geneva are due to resume Aug. 31, but it “doesn’t look particularly promising,” a diplomat involved in the discussions, speaking on condition of anonymity, told Al-Monitor. It’s “probably the last chance before Obama and Putin meet on Sunday in China.”

“I think the message to the Russians does have to be that there's a window closing here, and we need to see that they can reach a real agreement and that they can back it up,” deputy national security adviser Ben Rhodes told journalists at the White House press briefing Aug. 29.

“Even if we are able to get an agreement, that's only going to happen if we are assured that it's going to provide the necessary humanitarian access into Aleppo,” Rhodes continued.

“So I think this is a critical time,” Rhodes said. “In the coming days, we'll have an opportunity to see whether the Russians can get to the agreement that meets those requirements.”

Separately, the Islamic State's No. 2 leader and spokesman Abu Muhammad al-Adnani was reportedly killed near al-Bab, Aleppo, the IS-affiliated Amaq news agency reported Aug. 30. A senior unnamed US defense official confirmed that a US airstrike in Syria had targeted a senior IS leader, but would not confirm if it was Adnani, and said they were still assessing the results, media reports said.

In unusually blunt language, Michael Ratney, the US envoy to the Syrian opposition, blasted a Russian media report that alleged there was a US-Russia deal on Aleppo. Ratney said that was false, reiterating there is no agreement yet and calling the situation in Aleppo “unacceptable” to the United States.

“There is no truth to the Interfax reports about a Russia-US agreement to target fighters in Aleppo or to evacuate fighters from the city,” Ratney said in a press statement Aug. 29.

“The United States has not begun to coordinate with Russia in Syria, militarily or otherwise,” Ratney’s statement said. “It does not make sense to speak about cooperation without Russia fulfilling its obligations in Syria. This means ending indiscriminate attacks on Syrian civilians and holding the regime to its obligations under the cessation of hostilities.”

Ratney said, “The United States and Russia have not reached an agreement, but we are working on understandings that, if they are achieved, can restore the cessation of hostilities, reduce the violence and save lives. These steps are not based on trust, they are specific, and we have set a high ceiling for Russia, the regime and its allies.

“The situation around Aleppo city is unacceptable to us,” Ratney’s statement said. “The United States deplores the regime's attempt to besiege Aleppo city and demands that full access to the city be maintained.”

“The agreement seeks to address the overriding concerns on both the US and Russian sides. These include relentless attacks by the regime and its supporters — including Russia — on the opposition and Syrian civilians, and its bad faith participation in both the cessation of hostilities and the political process,” Ratney’s statement concluded. “It also includes the need to intensify efforts against terrorist groups, namely [IS] and Jabhat al-Nusra, now known as Jabhat Fatah al-Sham, that represent a threat not only to the United States and international community, but also to the Syrian Revolution.”

US-Russian mistrust on Syria seems only to have intensified in the weeks since Kerry reached an initial understanding with Putin and Lavrov in Moscow July 15. Their priorities in Syria seem to have further diverged since then, analysts observed.

“I think the situation in Aleppo is likely a sticking point in these negotiations, and it is causing quite a bit of frustration on the US side,” Genevieve Casagrande, a Syria analyst at the Institute for the Study of War, told Al-Monitor.

But even if a deal on Aleppo can be reached, “I don’t think that will unlock [the broader deal] altogether,” Casagrande continued.

“We have been monitoring Russian airstrikes the past 10 months,” Casagrande added. “It is quite clear to us, and I am sure it is clear to the US, that the US will need some confidence measure that the Russians and Syrian regime won’t turn around and continue strikes against the mainstream elements of the opposition” even if a deal is reached.

More broadly, Casagrande said, the US-Russian talks have gone on so long without results that it raises the question of whether a deal should be made so close to a new US administration coming into office.

“Russia could be seeing what value it could have in drawing out the talks proposal … [and trying to] extract additional concessions,” Casagrande said. “It is quite clear the US is very interested in a deal with the Russians. However, the exact details have to be worked out. It is also interesting we have a new administration coming into office soon. The question in the air is whether or not either side will try to push for a deal to happen before the next administration.”

“Everyone involved is trying to clarify the conflict by removing groups they don't like,” Kofman, a fellow at the Wilson Center Kennan Institute, told Al-Monitor by email Aug. 30. “Some wish to remove [Bashar al-] Assad's forces, others wish to remove Kurdish forces, and [the] Russians want to remove any viable 'moderate opposition' leaving pro-Assad groups, Kurds and jihadists as the only actors in Syria.”

Russia may not see the need for a deal with the United States in order to advance its objectives in Syria, Kofman said.

“One year ago, Assad's forces were about to collapse and Idlib/Latakia were on the verge of being captured. A collapse of Syrian forces appeared inevitable,” Kofman said. “Today, the opposition has its only stronghold left as Aleppo, Assad has Latakia and Idlib stabilized … and closed up internal pockets of resistance in Homs/Daraya. US policy has shifted from ‘Assad must go and cannot be part of a transition’ to ‘Assad can stay for a while’ … then to want to do [military-to-military] cooperation, which we swore we wouldn't do 10 months ago.”

Kofman added, “At this rate, 10 months from now, we will likely be discussing how the moderate Syrian opposition was destroyed on the battlefield."

Lavrov, at his press conference with Kerry in Geneva Aug. 26, “referred to building trust between the United States and Russia,” a former Russian diplomat, speaking on condition of anonymity, told Al-Monitor. “For me, this is a key word now. There has been deep mistrust between the two counties about each other’s real intentions, which is one of the key reasons, for example, for Russia, with its memory of Libya, to object to a no-fly zone.”

“So I would decipher [Lavrov] as pushing for addressing and somewhat diminishing this distrust through the joint elaboration of practical steps on the ground, in the understanding that an agreement on the final objectives is not possible, at least for now,” the former Russian diplomat added.