US Secretary of State John Kerry had been expected to travel to Geneva to try to finalize a deal with Russia for a nationwide cease-fire in Syria this week, but hopes for concluding the accord appear once again to have been lowered. 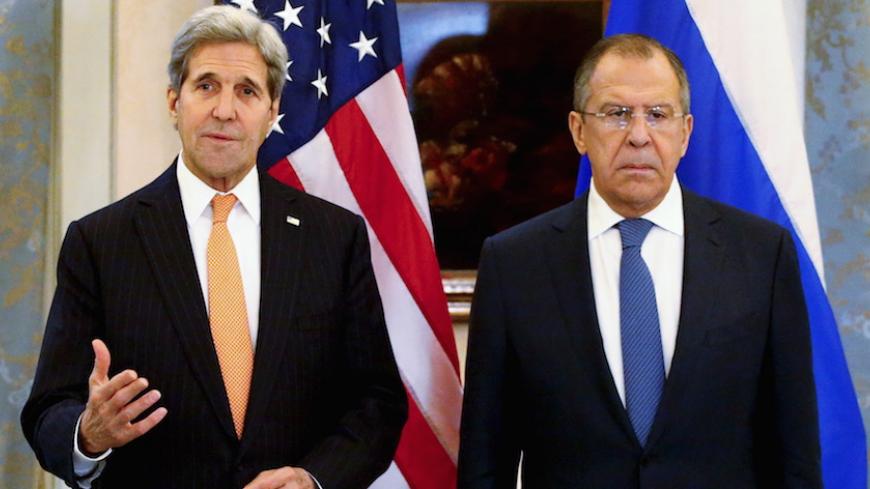 Russia's Foreign Minister Sergey Lavrov (R) and US Secretary of State John Kerry address the media before a meeting in Vienna, Nov. 14, 2015.

WASHINGTON — US Secretary of State John Kerry had been expected to head to Geneva to try to finalize a deal with Russia to restore a nationwide cease-fire in Syria that could be announced later this week, but US officials cautioned Sept. 7 that the prospects for a deal again looked less likely, though they said the situation remains very fluid.

The Russian Foreign Ministry apparently announced that Foreign Minister Sergey Lavrov and Kerry would meet in Geneva on Sept. 8-9. But State Department spokesman Mark Toner told journalists that while Kerry and Lavrov spoke by phone for 45 minutes Sept. 7, he had no travel yet to announce.

It was unclear if the conspicuous uncertainty over whether Kerry would travel to Geneva reflects genuine setbacks in the negotiations with the Russians, or is more of a negotiating tactic by one or both sides in the possible final stages of deal talks. "I think it's more needing to make sure we are all on the same page," a US official suggested. It's "still very fluid."

The outlines of what was described as a forward-leaning and complicated agreement between the United States and Russia have been reached, but there are still elements — technical details regarding implementation steps — that need to be finalized, American officials, speaking on condition of anonymity because the negotiations are still ongoing, said Sept. 6. When agreeing to something so complicated, unless all the many elements are in place, it is not complete, one explained.

“We definitely want to make sure that we have a clear understanding on the way forward, how to implement this arrangement if we do come to agreement on it, what the clear steps are going forward to implement it and to make sure that it’s in our interests and in the interests of the Syrian opposition as well as the Syrian people,” Toner told journalists at the Sept. 6 State Department press briefing.

The agreement — if it can be reached — aims to establish a nationwide cease-fire in Syria, while focusing US and Russian military operations against al-Qaeda’s Syria offshoot and the so-called Islamic State, bring in humanitarian aid and eventually restart UN-led intra-Syrian talks on a political transition.

But US officials warned that they had twice earlier thought they might be able to finalize the deal — when Kerry met with Lavrov on the sidelines of the G-20 summit in Hangzhou, China, last weekend and in Geneva last month — and both times came up short.

Indeed, anticipation of reaching a deal in Hangzhou was so high that US Syria envoy Michael Ratney sent a four-page letter explaining it to the Syrian opposition and rebel factions Sept. 3, and a press conference with podiums for Kerry and Lavrov was set up in Hangzhou the same day. However, by the time Kerry and Lavrov completed their meeting, there was only one podium, and brief comments by only Kerry when an agreement did not materialize. US officials said the Russians had tried to walk back elements of the deal they had previously agreed to, and the United States rejected the changes.

The frustrating negotiating experience and Russian-backed Syrian regime advances that threaten to besiege rebel-held eastern Aleppo have added to US wariness about Russian intentions and uncertainty over whether Russia really wants a deal at all; the talks have ebbed and flowed with developments on the ground in the 5-year-old conflict. Russia, in turn, has repeatedly complained that the United States had promised, but not followed through, to help separate moderate Syrian rebel factions from al-Qaeda-linked Jabhat al-Nusra since a US-Russian deal for a cessation of hostilities in Syria was reached in February.

US President Barack Obama alluded to “gaps of trust” after meeting with Russian President Vladimir Putin in a 90-minute pull-aside in China on Sept. 4.

“We have had some productive conversations about what a real cessation of hostilities would look like that would allow us both, the United States and Russia, to focus our attention on common enemies, like [IS] and [Jabhat al-] Nusra,” Obama told journalists at a post-G-20 press conference in Hangzhou on Sept. 4. “But given the gaps of trust that exist, that's a tough negotiation, and we haven’t yet closed the gaps in a way where we think it would actually work.”

Ratney, in the four-page letter in Arabic addressed to “Representatives of the Revolutionary Opposition Factions in Syria” (translated here by Al-Monitor), explained the goals of the anticipated agreement with Russia, and described the US-Russian negotiations as having been “very difficult.”

“You have no doubt heard by now about the agreement we have nearly reached with Russia and that will be announced soon,” Ratney wrote in the Sept. 3 letter. “After long talks with the Russian side, we believe that these arrangements can — if implemented in good faith — restore the truce and stop the random attacks from the regime and Russia on civilians and the opposition, in addition to greatly reducing the violence in Syria and paving the way for the relaunching of a credible political process.

“We believe that we are on the cusp of reaching an understanding with the Russians that can allay these fears,” the letter states. “We also think that this agreement should be stronger than the original [cessation of hostilities] agreement because it should prevent Russia and the regime from bombing the opposition and civilians under the pretext that it’s striking Jabhat al-Nusra.

“This reality has led us to where we are now. There are things worrying us, namely the regime’s ongoing attacks on the opposition, its brutal attacks on Syrian civilians, its lack of intention to implement the February 2016 cessation of hostilities and its neglect of the political process. As for Russia’s source of concern — which also concerns us — it is the presence of extremist groups and a branch of al-Qaeda in Syria that is now known as Jabhat Fatah al-Sham.

"The objective of the agreement that you’ve heard about is to address these issues.”

"What have we agreed upon with Russia?

"The main features of the agreement are that Russia will prevent regime planes from flying, and this means that there will not be bombing by the regime of areas controlled by the opposition, regardless of who is present in the area, including areas in which Jabhat Fatah al-Sham has a presence alongside other opposition factions. In return, we offer Russia coordination from our side to weaken al-Qaeda in Syria. This coordination includes an understanding that there will not be bombings by the regime or random bombings by Russia.”

“What are our conditions before implementing the agreement?

"Before we implement any agreement, we told the Russians that they and the regime must stop attacks on the opposition and recommit to the cease-fire. We have set a high ceiling for conditions, including the withdrawal of the regime from Castello Road, ending fighting around Ramouseh Road, allowing for the entry of humanitarian aid to Aleppo through both Ramouseh and Castello Roads and ending all offensive attacks and operations in all parts of the country. We said that all of these things must happen before the United States and Russia implement any agreement.

“The Russians told us that they agree to do these things, and thus we believe that they will for the regime to comply, but we have to test this matter — as we have said many times, an understanding with the Russians is not based on trust.”