Shared tactical objectives in Syria are likely to continue to drive Russian-Iranian cooperation despite the quick end to Moscow's use of the Hamedan air base. 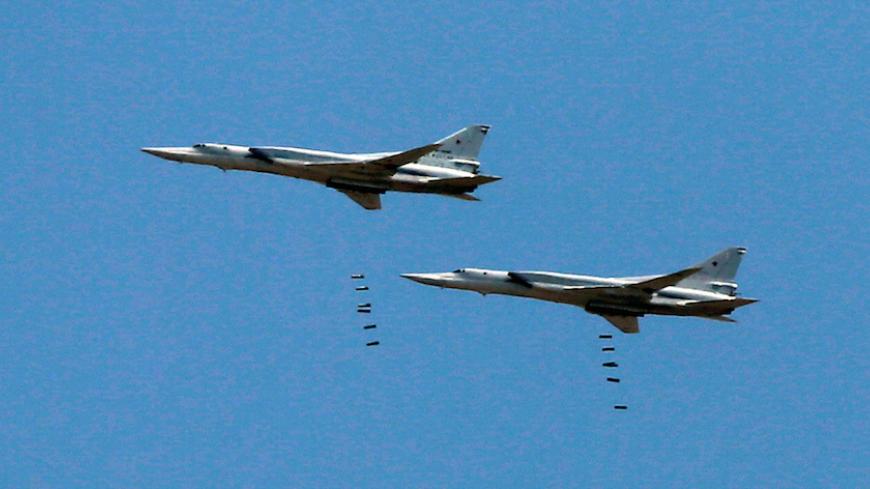 TEHRAN, Iran — News of Russian warplanes flying missions from an air base in Iran’s western province of Hamedan first made headlines Aug. 15. The Arab outlet Al-Masdar News scooped the development, publishing exclusive footage of Russian TU-22M3 bombers and Sukhoi-34 strike fighters in the Islamic Republic. Soon afterward, Russia’s Defense Ministry confirmed that it was launching attacks against Islamic State (IS) targets in Syria from Iranian soil.

In Tehran, Ali Shamkhani, the secretary of the Supreme National Security Council, confirmed the operations, highlighting that they had been carried out with the council's mandate, and said that cooperation between Iran and Russia in the fight against IS would “continue until they [the militants] are fully annihilated.” A few days later, however, both Russian and Iranian media outlets reported a surprising halt to the Russian operations out of Hamedan and that Russian planes were leaving Iran. There was also speculation about the consequences of these developments on Iranian-Russian relations. It remains unknown why Iran allowed the Russians to use the air base in the first place and also why the Russians left so quickly.

The Russian air force had been targeting positions in Syria from the Mozdok military base in the Caucasus. To reach targets in Syria from Mozdok, jets have to fly some 2,000 kilometers (1,242 miles). Use of the Hamedan base reduces that distance to 900 kilometers (560 miles), thus benefiting Moscow economically and strategically. Russia had also been launching strikes from the Khmeimim air base, in Syria’s Latakia province, to which it was granted access in late 2015. Khmeimim, however, is not suitable for Russia’s massive TU-22M3, one of the largest bombers in the world.

Iran has always supported the government of Syrian President Bashar al-Assad and considers its support to be strategic. Thus, one can assume that Tehran views its cooperation with Russia in Syria as falling within the framework of the pursuit of its own goals and interests. Moreover, Iran’s military operates under the supervision and command of the supreme leader, Ayatollah Ali Khamenei, whose strong personal inclination is to preserve the ideological-strategic interests of Iran in Syria.

Given these tendencies, strategic cooperation with governments that share Iran’s interests in Syria would not be difficult to forge. Indeed, the decision to allow the Russians on Iranian soil was made by the Supreme National Security Council, consisting of representatives from all pillars of power in the country. Given this, the opposition expressed by 20 lawmakers in the 290-member parliament is insignificant by comparison and cannot be the reason for Russia’s sudden departure from Hamedan. Several theories have been put forth about the possible reasons for the withdrawal.

There has been speculation that Moscow’s primary motive for using the Hamedan air base was to catch its targets off guard. The reasoning behind this claim is that since all Russian planes flying over Syria are monitored by Western spy satellites, Syrian opposition positions could be receiving notification of pending airstrikes. Thus, when the news of Moscow using the air base in Iran surfaced, the element of surprise was gone.

It is also possible that the Russians do not consider the Hamedan base fit for their massive TU-22M3 bombers. Indeed, after conducting a few flights, they may have conducted a more thorough evaluation of the facilities and capabilities as well as the deficiencies of the base so that necessary improvements can be made for future operations. If so, it is also possible that the Russians simply decided to pursue operations from Khmeimim for the time being and to refrain from employing the TU-22M3s. Indeed, if needed, TU-22M3 flights could be conducted from the Caucasus.

There is also the theory that Russia never actually withdrew its planes from Iran and that the announcement of the withdrawal was a strategic deception to maintain the element of surprise. This, however, can easily be dispelled with satellite imagery.

How these developments might impact the Russian-Iranian relationship should be analyzed from two angles: the impact of their cooperation in the Syrian crisis, which is to the strategic advantage of all the governments that support Assad, and overall cooperation at the tactical and strategic levels.

Given the difficult history of Russian-Iranian relations, most Iranian elites are inclined toward cooperation with the West rather than Russia. Indeed, even today, these elites view Russia’s behavior as too fluid and unpredictable, which, coupled with the perception of a lack of common strategic interests at the international level, makes it clear that Moscow and Tehran will have a difficult time forming a strategic union or alliance.

Moreover, some Iranians view Iran as the inheritor of a great empire, while others view Iran as the leader of the Muslim world. In the eyes of both these camps, elevated ties with Russia are only acceptable if strategic cooperation is based on equal standing and partnership. This is problematic because the Russians are arguably not looking for an equal partner but an ally of lesser standing and power.

There are a number of other obstacles to the formation of an Iranian-Russian alliance. Among them, Article 146 of the Iranian Constitution prohibits foreign military bases on Iranian soil. A strategic alliance could be assumed to entail the permanent positioning of Russian military assets inside Iran, as in the case of the Khmeimim base in Syria. Last but certainly not least, Iran’s political structure is a fundamental obstacle to the definition of a common political identity and broader shared political interests, given that Russia is a secular country with global goals, while Iran is a theocracy with religious objectives.

These circumstances have served to keep bilateral relations at a tactical level, rather than a strategic level. Nonetheless, despite the obstacles, given a shared tactical interest in Syria, a repeat of not only Russia’s use of the Hamedan air base but also other Iranian military facilities is wholly conceivable.