US rebukes Russia Aleppo plan as 'demand for surrender'

The United States criticized a Russian Defense Ministry announcement of “humanitarian corridors” for civilians to leave rebel-held eastern Aleppo, but US-Russian negotiations on deeper cooperation continue as the city is steadily falling to the regime. 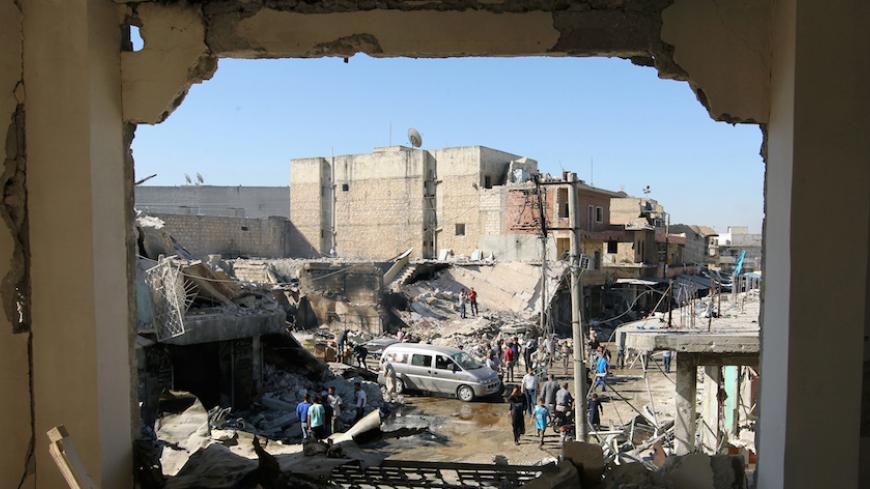 People inspect a site hit by airstrikes in the rebel-held town of Atareb in Aleppo province, Syria, July 25, 2016. - REUTERS/Ammar Abdullah

WASHINGTON — The United States on July 28 rebuked as a “demand for surrender” a Russian Defense Ministry announcement of “humanitarian corridors” for civilians and unarmed rebels to leave rebel-held eastern Aleppo. But despite the US criticism, Syrian opposition members and Syria analysts said that Aleppo is steadily falling to the Syrian regime, even as US-Russian negotiations on deeper cooperation in Syria continue.

But while the United Nations has called for a 48-hour “humanitarian pause” in Aleppo to bring in humanitarian aid, Russia’s Defense Ministry on July 28 instead announced a plan in coordination with the Syrian regime to let residents and unarmed rebels leave the area.

“A tough humanitarian situation has developed in the city of Aleppo and its suburbs,” Russian Defense Minister Sergei Shoigu said July 28. Russia, together with Syrian authorities, will open three humanitarian corridors, for civilians and unarmed rebels to leave, he said. A fourth corridor for armed rebels is also being set up, he said.

Both the United States and the United Nations said they had been blindsided by the Russian announcement, and described the proposal as problematic.

“Without further clarification, it would appear to be a demand for surrender of opposition groups, and the forced evacuation of innocent civilians from Aleppo,” State Department spokesman John Kirby told journalists at the State Department press briefing July 28.

"The innocent people of Aleppo should be able to stay in their homes safely and receive the humanitarian access, which Russia and the regime have agreed … according to the UN Security Council resolution,” Kirby said.

UN Syria envoy Staffan de Mistura said flatly that he and his staff had not been informed about the Russian Defense Ministry plan for Aleppo in advance.

“We were not consulted,” de Mistura told journalists in Geneva on July 28.

“We actually learned … during the [humanitarian] task force [meeting July 28] this breaking news of a Russian military proposal,” de Mistura said. “It is premature for me and others to actually make any comments until we have further details on what has been and is the Russian proposal.”

A top UN humanitarian chief said that the UN needed safe and sustained access to provide aid to nearly besieged Aleppo residents, and that people could not be forced to leave the city.

“No one can be forced to flee, by any specific route or to any particular location,” UN Undersecretary-General for Humanitarian Affairs Stephen O’Brien said in a statement July 28. “Protection must be guaranteed for all according to the principles of neutrality and impartiality.”

“Our proposal for 48-hour humanitarian pauses to enable cross-line and cross-border operations is what we as humanitarians require,” O’Brien said.

Despite the US protests and UN expressions of concern, Syrian opposition activists and analysts see the United States as being unwilling to provide the resources to stop Aleppo from falling to the Syrian regime, even as it continues discussions with Russia on deeper coordination in targeting the so-called Islamic State (IS) and Jabhat al-Nusra militants. (Jabhat al-Nusra on July 28 announced that the group had broken with al-Qaeda, and changed its name to Jabhat Fatah al-Sham. But the State Department’s Kirby said it was too soon to make any changes in US and UN assessments that the group is a designated foreign terrorist organization.)

“The [US] administration is 100% focused on two things,” Barabandi said. “The war against IS and [Jabhat al-] Nusra, and [retaking] Raqqa. They will do that [before the administration leaves office].”

In Iraq, US officials know who their ally is to retake Mosul — the Iraqi army. But in Syria, “They will see who will work with them on the other side,” Barabandi said.

He added, “The US experience with the moderate forces [in Syria] failed. It didn’t give any results.”

Are US officials essentially acquiescing to Aleppo falling to the regime? Yes and no, said Syria expert Aron Lund.

“Well, it is falling and they’re not doing what would be required to stop it, like pushing in lots of resources to the rebels, hitting the pro-Assad forces or grounding the air forces bombing them,” Lund, a nonresident Syria analyst at the Carnegie Endowment for International Peace, told Al-Monitor July 28. “But I don’t see how that is ‘letting’ it fall. It seems the US can’t stop it happening except by doing things that they really don’t want to do.”

Lund added, “I guess the question is how far in advance they’ve seen this coming, how long it’s been part of their planning.”

US Secretary of State John Kerry, speaking in Laos on July 26 after meeting with his Russian counterpart, said he hoped that the United States and Russia would be able to announce the details of an understanding on Syria that is still being negotiated by early August.

“We’re doing our homework,” Kerry told journalists in Laos after meeting Russian Foreign Minister Sergey Lavrov on the sidelines of an East Asia Summit Foreign Ministers’ meeting. “And so today, Foreign Minister Lavrov and I talked about the next piece of homework that needs to be completed before we would be prepared to make a public announcement.”

He continued, “My hope would be that somewhere in early August in the first week or so, who knows, somewhere in there, we would be in a position to be able to stand up in front of you and tell you what we’re able to do, with the hopes that it can make a difference to the lives of people in Syria and to the course of the war.”

But as the US-Russia negotiations continue, the situation on the ground is changing very quickly in ways that will seemingly deeply impact the potential for a negotiated political solution at resumed Syria political talks, which de Mistura aims to hold in late August.

De Mistura said he was heading to Iran for consultations and sending his deputy to Damascus “to discuss with the Syrian authorities some ideas that we have developed” for resumed Syria talks next month.

Barabandi suggested that de Mistura may be under pressure from Russia to propose a national unity government rather than a transitional government, during which Assad would stay in the transition but not run again in new Syrian presidential polls.