What would fall of Aleppo mean for US Syria policy?

If the Syrian regime’s campaign to retake eastern Aleppo succeeds, it could have a profound impact on the incoming US administration’s Syria plans. 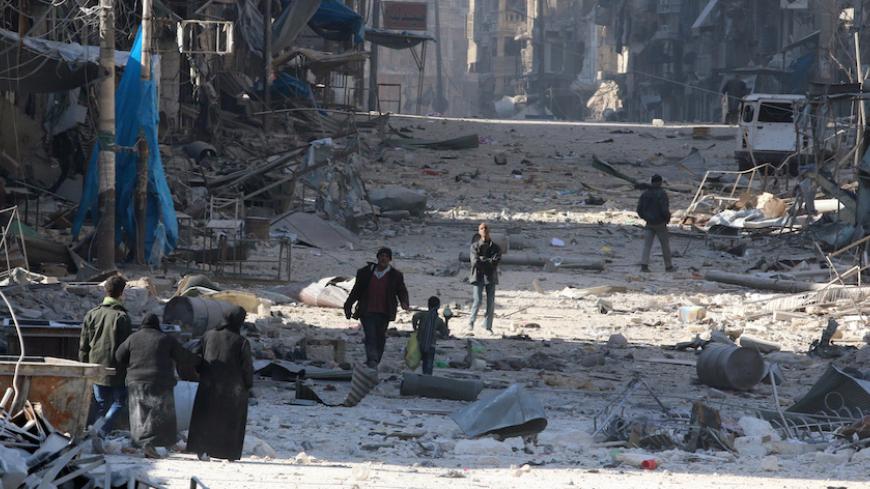 Syrians walk over rubble of damaged buildings while carrying their belongings as they flee clashes between government forces and rebels in Tariq al-Bab and al-Sakhour neighborhoods of eastern Aleppo toward other rebel-held besieged areas of Aleppo, Nov. 28, 2016.

WASHINGTON — The prospective fall of rebel-held eastern Aleppo to the Syrian regime and its allies could bolster President-elect Donald Trump’s administration. Trump has already expressed openness to work with Russia to fight the Islamic State (IS) and disinclination to support Syrian rebel groups seeking the ouster of Syrian President Bashar al-Assad. But the incoming US administration may soon find that it needs vetted Syrian rebels for a task Trump has consistently prioritized in his campaign: combating IS and seizing and holding IS-held territory in eastern Syria, and preventing it from returning.

With the Syrian regime and its allies making rapid gains in their push to retake rebel-held eastern Aleppo in recent days, Russian officials say they hope that the situation in the ancient city, once Syria’s commercial hub, will be resolved by the time Trump is inaugurated on Jan. 20.

"The Russians want to complete the operation before Trump takes power," a senior official in the pro-Assad military alliance told Reuters on Nov. 29.

"We are hoping for this, of course," Russian Deputy Foreign Minister Mikhail Bogdanov told Russian media Nov. 30 when asked if Aleppo would be resolved by the end of the year. "We need to force these terrorists out in the same way as they need to be forced out in Mosul and in Raqqa. It's a general task."

Russia is looking to the Trump administration to validate its role in Syria as a major global power, said Russian analyst Dmitri Trenin.

“Russia has been basically pursuing a line in Syria that envisaged the United States and Russia playing the dominant role in a Syria diplomatic process, and the US and Russia collaborating against [IS],” Trenin, the director of the Carnegie Moscow Center, said in a press call Nov. 30.

“Russia’s interested in engaging the US … in both the [Israeli-Palestinian] peace process and engaging it in some sort of joint military campaign against [IS],” Trenin said.

He continued, “Both strategies and objectives would contribute to Russia’s overarching goal to be treated as a major power globally. If it can be of decisive importance in the Middle East … then you are by definition a global power. You can only achieve that if the US plays along.”

But the potential fall of eastern Aleppo to the Assad regime may not significantly change the dilemmas faced by the incoming US administration on its Syria policy or make a sustainable political resolution to the Syrian conflict more achievable.

“I think that there is this risk of Aleppo falling, particularly during the presidential transition period,” said Melissa Dalton, a former Defense Department official now with the Center for Strategic and International Studies.

“There is a real risk of Assad and Iran presenting a fait accompli to the US and its coalition partners and the rebels on the ground,” Dalton said. “If Aleppo falls, the choices narrow for the United States in terms of next steps.”

“One choice is, do you try to significantly overturn the events, buttress support to the rebels, to try to reverse the gains?” Dalton continued. “That would require a higher degree of military commitment, political backing and resourcing to reverse that tide.”

“If counterterrorism is to be the priority — and reading what has been said during the transition, it seems that counterterrorism is going to be a very high priority for the incoming administration — … you essentially have two choices there,” Dalton said. “You can double down on the current approach, support the rebels on the ground, [conduct] airstrikes from above in working with folks in the region. Or you could increase the number of US forces involved. But that is not politically palatable, even for the incoming administration. … That dilemma is still going to present itself. Where do you go from there?”

The incoming Trump administration will soon face the same challenges that President Barack Obama and his administration grappled with on Syria, including determining whether the United States needs to work with indigenous forces to take and hold territory now held by Sunni extremist groups, said defense analyst Nicholas Heras.

“The wild card is to what extent the Trump administration believes that the leverage that the network the United States has built with vetted Syrian opposition groups on the ground is worthwhile as an indigenous counterterrorism force,” Heras, a Syria defense analyst at the Center for New American Security, told Al-Monitor. “The case can be made … that the US should not just walk away from the Syrian [opposition].”

“The reality is that the Trump administration will inherit a neo-medieval Syrian map, where you have multiple actors controlling different areas of territory,” Heras said.

He added, “The Trump administration will face the same challenges that the Obama administration has — to conduct a preventative counterterrorism mission that empowers political and social structures in opposition-controlled areas that is resilient against Sunni extremist ideological actors. That is not going away. They are going to have to wrestle with this.”

Russian officials have held meetings with representatives of the Syrian armed opposition group from Aleppo in Turkey in recent days. They discussed a proposal under which al-Qaeda-linked militants would leave Aleppo in exchange for aid being delivered and a cease-fire, Syria analyst Chares Lister said.

The proposal is similar to one that UN Syria envoy Staffan de Mistura has proposed and which is still on the table. The UN envoy is expected to present new Syria political proposals to the UN Security Council on Dec. 8 after meetings in Washington next week.

Even if the next US administration ultimately determined it needed to work with elements of the Syrian rebels to combat extremist groups, the fall of eastern Aleppo to the Assad regime would be a significant blow to the Syrian revolution, said Bassam Barabandi, a former Syrian diplomat now with the Syrian opposition.

Russia has not been militarily active in aiding the recent Syrian regime advances in Aleppo, and Russia is indeed concerned about what comes after Syrian forces retake Aleppo, said Michael Kofman, a Russia expert with the Wilson Center Kennan Institute. “There is rapidly increasing tension between the Turkish intervention in northern Syria and the Syrian army.”

Until now, the Syrian army has been separated from where the Turks are deployed in northern Syria. “However, once they take Aleppo, the problem is … friction materializes very rapidly when two hostile forces are in proximity to each other,” Kofman said.

“After they take Aleppo, the Syrians and Iranians have to say what’s next,” Kofman added. “I don’t think they have a brilliant strategy.”

“Option 1 is to go back to Russia and say, ‘Let’s pursue this plan for settling the Syrian war,’” he said. “But they may say, ‘We are not done here … we were successful in Aleppo, let’s see what else we have to do.’”