President Obama's envoy praises all sides in a bid to keep the coalition together. 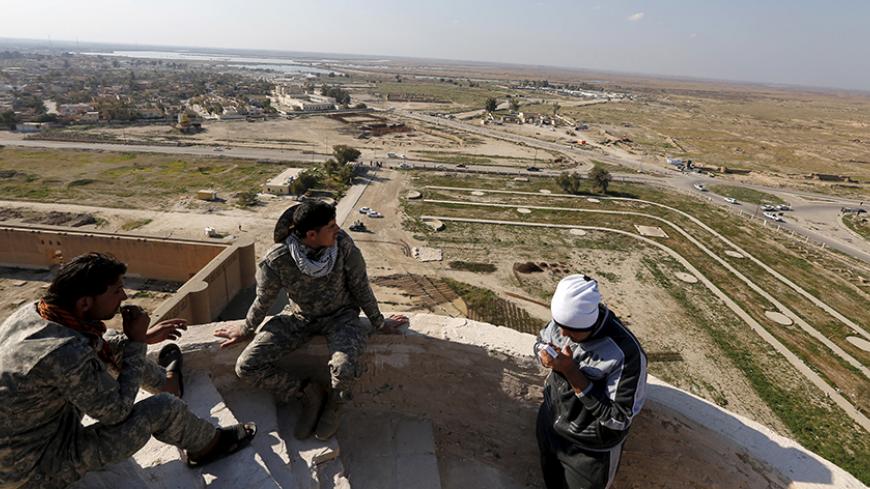 Shiite fighters sit on the top of the Spiral Minaret of the Great Mosque in Samarra, Feb. 3, 2016. - REUTERS/Ahmed Saad

Shiite militants helped save Iraq from the Islamic State, President Barack Obama's envoy to the anti-IS coalition told Congress at a Feb. 10 hearing.

Brett McGurk's blunt comments underscore the envoy's gargantuan task of juggling the competing interests of a broad array of forces that often seem more at war with each other than with their stated enemy. McGurk took turns praising Turkey, the Kurds, Shiites, Sunnis and the international community during the House Foreign Affairs Committee hearing, while urging all of them to put their differences aside and cooperate in Iraq and Syria.

Pressed by Rep. Ron DeSantis, R-Fla., as to whether he had deliberately excluded Iran-backed militias as a destabilizing force in his written testimony, McGurk responded by praising Iraqi Ayatollah Ali Sistani's June 2014 call to arms.

"It was a really critical moment," McGurk answered, "and had he not done that I think it would have been very hard to check what [IS] was doing, because they were on a rampage."

"This is a huge concern for us … and for the government of Iraq," McGurk said. "We don't want to paint all of these volunteers, many of whom are [Shiite], with the same brush, because that simply wouldn't be true."

Prime Minister Haider al-Abadi has publicly said that running militias in Iraq would be considered a "hostile act" by Tehran, McGurk added. And he pointed out that nine militia members were arrested last week in Diyala province, while papering over the fact that no one has yet been prosecuted or sentenced, according to US news agency Bloomberg.

"We do have revenges; some of these people volunteer because they lost their loved ones," the Washington representative of the so-called Popular Mobilization Units told Bloomberg. "That’s going to happen; we can’t stop this.”

"We've worked very closely with our Turkish partners … and they're doing quite a lot," he said. "They're building berms, they're increasing patrols, they're sharing intelligence, they're setting up risk-analysis and they're conducting cross-border artillery strikes."

McGurk left out that Erdogan personally called him out for his recent visit to Syrian Kurds in Kobani whom Turkey considers to be terrorists. Ankara is widely believed to be mulling a cross-border invasion as the anti-Assad rebellion collapses.

It's not just the Turks who are running out of patience with the US strategy in Syria.

"There are the ambiguities including among the actors of the coalition. … I'm not going to repeat what I've said before about the main pilot of the coalition," Fabius said, according to Reuters. "But we don't have the feeling that there is a very strong commitment that is there."

And the German ambassador to Washington said the United States has been "slow" to realize the scale of the disaster in Syria.

"The United States has been slow to recognize this is a much bigger thing than anything else we’ve experienced since the beginning of the European Union," Peter Wittig told The Washington Post. “We didn’t see it earlier, we were totally unprepared. … We’re not blaming the United States. It takes time for this country to realize that it’s really that serious.”

McGurk blamed Moscow for what he called the "humanitarian catastrophe" in Aleppo and across the country.

Later, he said that 70% of Russian bombs are falling on rebel positions and called Moscow's intervention in Aleppo a "huge problem" that has "peeled off" rebel forces that had been battling IS.

"What Russia is doing is directly empowering [IS]," he said. "This will be a very difficult three days coming up" in Munich, but the major powers must reach consensus on a political resolution to the 5-year-old conflict in Syria. On Feb. 11, the 20-nation International Syria Support Group is meeting in Munich; that will be followed by the Munich Security conference.

McGurk did credit Russia with agreeing that Assad must go for the war to end and Syria to remain united.

"In these conversations we have in Vienna, the Russians understand that. The Iranians don't seem to understand that. But it's a complete fantasy to think the Assad regime is ever going to be able to establish its writ over Syria."