Will Sistani be able to control popular mobilization forces?

Grand Ayatollah Ali al-Sistani has distanced himself from politics, while stressing the need for the Iraqi government to build a strong state in which all sects feel equal. 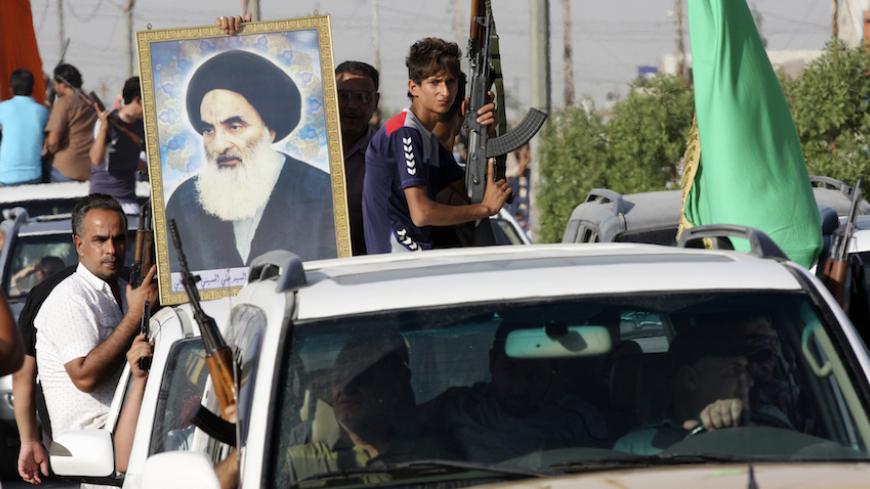 Volunteers who have joined the Iraqi army to fight against predominantly Sunni militants carry weapons and a portrait of Grand Ayatollah Ali al-Sistani during a parade in Baghdad's Sadr City, June 14, 2014. - REUTERS/Wissm al-Okili

Iraq’s top Shiite cleric, Grand Ayatollah Ali al-Sistani, issued a fatwa on June 13, 2014, encouraging Iraqis to take up arms to defend "their country and their people and their holy places" as well as join the security forces. This fatwa, known as the "righteous jihad fatwa," came after the Islamic State (IS) occupation of Mosul, Salahuddin, Anbar, Diyala and Kirkuk and its threats to occupy Karbala, Najaf and Baghdad, and was a major turning point in the war.

In response to the fatwa, hundreds of thousands of youths, particularly in the Shiite areas, have answered the call of duty. Subsequently, on June 15, the Iraqi government declared the establishment of the all-volunteer popular mobilization forces. Since then, the organization, which Shiite factions have joined, has managed to liberate many of the IS-controlled areas in southern Baghdad, Diyala and Salahuddin.

The relationship between the Najaf religious authority, headed by Sistani, and the popular mobilization forces is not a direct one.

Sistani has not dealt with the popular mobilization forces as the product or subordinate of the religious authority. After the fall of the Iraqi army to IS, Sistani asked volunteers to join the forces, which were under the state’s control. Hundreds of units trained in weapons joined these forces, as did political parties. Sistani saw that the citizens of regions occupied by IS are fighting for their regions and themselves.

Shiites responded the most strongly, since Sistani is a Shiite leader.

There has been talk of retaliatory actions by some members of the popular mobilization forces in certain areas, namely in Diyala governorate. Shiite residents took revenge on their Sunni neighbors, who had lived with them for years. But as soon as IS took control of the area, some Sunnis joined its ranks and confiscated their Shiite neighbors' properties. However, Shiite volunteers liberated some Sunni areas, while many Sunnis from Salahuddin joined the popular mobilization forces, including tribes, mainly the Sunni al-Jabour tribe.

This explains the distance Sistani has created between himself and the popular mobilization forces. It is exactly the same as his disengagement from politics. His role through the fatwa consists of prompting the state to support and sponsor the volunteers, and to urge them to be committed to national unity, tolerance and battlefield regulations.

In this regard, while Sistani was endorsing the popular mobilization forces and valuing their sacrifices, he firmly stood against any abuses by them in the areas liberated from IS. On Feb. 13, Sistani issued recommendations that are having the same impact as the fatwa, mainly not to seek revenge and to commit to humanitarian standards during war. Some clerics in Najaf viewed them as the definition of the first fatwa, in terms of its emphasis on the need to protect innocent people’s lives and properties.

The "righteous jihad" concept that Sistani created is not open-ended. It is a means to an end, and linked to deflecting the IS danger. Once this threat is gone, the fatwa becomes invalid.

At that point, the Iraqi state will have to deal with the period after the validity of Sistani’s fatwa, which it anticipates doing through the National Guard law, which is supposed to encompass volunteer fighters, as part of clear mechanisms for the next stages.

The popular mobilization forces will be dissolved when the battles are over, and security will be under the purview of the National Guard, a military force more heavily armed than the police but less than the Iraqi army. A state institution that performs its duties according to the state’s needs and requirements, its members are not volunteers, but recruits who work for the state.

The protection of social peace in Iraq is a key goal of Najaf’s religious authority, which has never spoken of protecting a particular component at the expense of the other and treats the Iraqis as united people, regardless of sect.