Why some Shiites are refusing to join fight against Islamic State

Shiite fighters will not participate in the upcoming Mosul battles, as they feel the sacrifices they have made so far are not appreciated by the Sunnis. 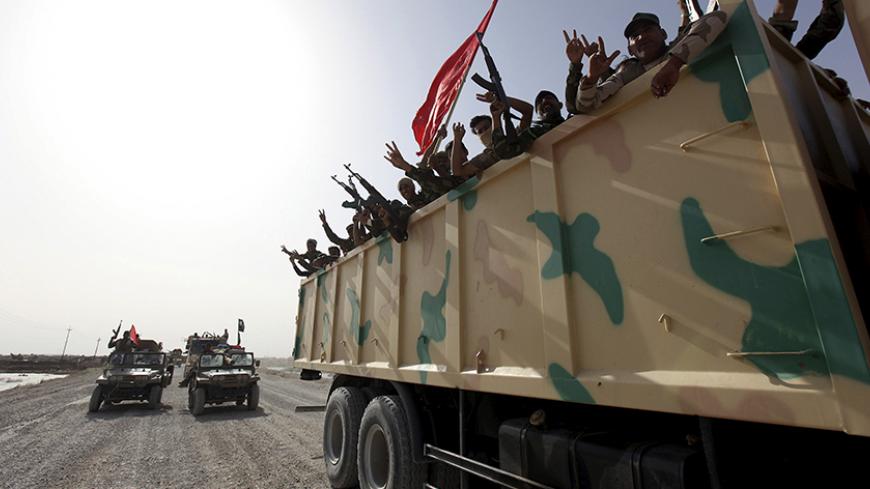 BAGHDAD — Iraq's Shiites have started speaking up about their fighters being sent to the battlefields in Salahuddin, Anbar and Fallujah, where the Islamic State (IS) and its allies, the Sunni tribes, are present, given the sectarian discourse in Sunni areas — such as Ramadi, Fallujah and Mosul — toward Shiite fighters. As a result, the Shiites are not sending their youth to fight IS.

Haidar al-Khafaji, a Shiite from Babil, told Al-Monitor, “My son Mohammad, age 20, died on July 12, 2014, during the battle to liberate Tikrit — where many IS supporters live.”

He said, “It is no use for the Shiites to participate in the upcoming Mosul battle because the citizens hate them, and taking part in these battles will not end this enmity.”

Hostility between the Sunnis and Shiites increased when the Baathist regime — made up of Sunnis, most notably Saddam Hussein — ruled the country; Shiite leaders and clerics were assassinated and removed from high-level positions.

Shiites feel that their sacrifices are not being appreciated, which Islamic researcher and author Ali al-Momen explained in an article on May 25, 2015, when he wrote that “Shiite fighters take all the lies, insults and accusations from the owners of the land.”

Abu Ali al-Mahawili, from al-Mahawil district in Babil province, south of Baghdad, shares these thoughts. Mahawili is the father of a young man who died during the Ramadi battle on Dec. 26, 2015. While speaking to Al-Monitor, he pointed to the pictures on a thick wooden board in the city square of about a dozen fighters of the Popular Mobilization Units who had died in the clashes in Salahuddin and Ramadi.

Mahawili said, “They sacrificed their lives in these mostly Sunni regions, but their sacrifices were not appreciated.”

In response to whether national feelings are running cold and sectarian feelings are flaring up, social researcher Ali al-Husseini from Babil told Al-Monitor, “Yes, many Iraqis no longer have national zeal, and they are no longer driven by slogans that pushed them to liberate regions in the past. Many have even joined IS.”

Husseini's statements are reflected in the rejection of the Popular Mobilization Units to fight in Fallujah against IS on April 23, 2015, under the pretext that the government had not been supporting them.

However, Saeed al-Sharifi, a fighter with the Popular Mobilization Units from Babil, told Al-Monitor, “I am a volunteer in the Hezbollah Brigades, but I abandoned their ranks because I feel a sense of ingratitude on the part of some Sunnis toward us, who view us as militias. The sectarian insults are among the reasons that are de-motivating Shiite men from fighting to liberate Mosul and Fallujah.”

The Ninevah provincial council unanimously voted on March 1 on the refusal of the participation of the Iraqi Popular Mobilization Units in the liberation of Mosul.

This refusal triggered controversy and opposing views. Shiite fighter Issam al-Asadi, who volunteered with the Iraqi Popular Mobilization Units in July 2014 and then retreated, told Al-Monitor, “We are fighting for people who hate us. So I stepped back.” He was referring to the citizens of the Sunni regions.

Yet Abbas Makki, a Shiite fighter hailing from Babil, told Al-Monitor, “The fight against IS in all of Iraq’s territory is a religious and national duty,” referring to the righteous jihad fatwa issued by Grand Ayatollah Ali al-Sistani in June 2014, which requires that volunteers join the fighting against IS.

The Shiite’s disappointment with the Sunnis who do not appreciate the sacrifices on their behalf was expressed by Samir Abu Sajjad, a blogger, on Dec. 29, 2015. He addressed the residents of Ramadi and Salahuddin, saying, “You need to respect the martyrs’ sacrifices.”

Shiite journalist Walid Taei supports the idea of not involving Shiite youth in the fighting in Sunni areas. He told Al-Monitor, “The Shiite sacrifices will be in vain for Iraq’s Sunnis, who curse the martyrs and consider them a sectarian militia.”

However, former Iraqi Environment Minister Qutaiba al-Jubouri denied in a statement that Sunnis are ungrateful for the sacrifices of the Popular Mobilization Units. In a press statement on March 9, 2015, Jubouri praised the “sacrifices of the security forces and Popular Mobilization Units to return Salahuddin to Iraq and the participation of the people of the south in the liberation of the province from IS.”

Al-Monitor learned about other positive stances toward the Popular Mobilization Units.

In a statement on March 2, 2015, the tribal council of elders in the Salahuddin governorate voiced support for the Sunni tribesmen who joined the ranks of the Popular Mobilization Units.

Talib al-Dulaimi, a Sunni who moved from Ramadi to Baghdad, told Al-Monitor, “These claims are false. The fact is that I have volunteered with dozens of Sunni youths in the Popular Mobilization Units and that both Sunnis and Shiites are citizens of this homeland. The sectarian stances of some Sunnis or Shiites do not apply to everyone.”

Jassem al-Moussawi, a political author and analyst from Baghdad, denied to Al-Monitor that some Shiites tend to oppose any participation in the liberation of Sunni areas, and described it as “a propaganda designed to counter the Popular Mobilization Units’ participation in the liberation of the Iraqi territory. This is because the majority of the Shiites consider the war against terrorism as a holy war, and in the eyes of the Shiites the battle for Fallujah is of strategic security importance since it is located near Baghdad.”

Ghayath Abdel Hamid, from Baghdad, who preferred not to disclose his sectarian affiliation, told Al-Monitor, “It is untrue that the Shiites prevented their sons from fighting IS under the pretext of the growing death toll.”

Islamic researcher and author Taleb Rammahi told Al-Monitor about the background of some of the negative stances. He said, “There are Sunni organizations, such as al-Qaeda and IS, that went too far in shedding Shiite blood. This was behind the Shiites’ conviction that the armed confrontation is the only choice they have.”

The stances are subject to the sectarian divide between Sunnis and Shiites, regardless of whether or not they go in line with the reality. Rather, the reality has become subject to sectarian interpretations, depending on the sect that the person embraces.

This unified stance of a national front fighting against terrorism goes beyond all differences. This is reflected today in calls to let go of sectarian quotas in parliament and in the government. Among these calls is the conference on communal reconciliation and social cohesion, held in Baghdad on Feb. 28, and sponsored by the United Nations Development Program, to find a cross-sectarian political bloc to rise up to this challenge.