The exodus of displaced people fleeing Iraq's Anbar province after the Islamic State imposed its control there should be an opportunity for the Iraqi government to unify efforts of all sects in the face of terrorism. 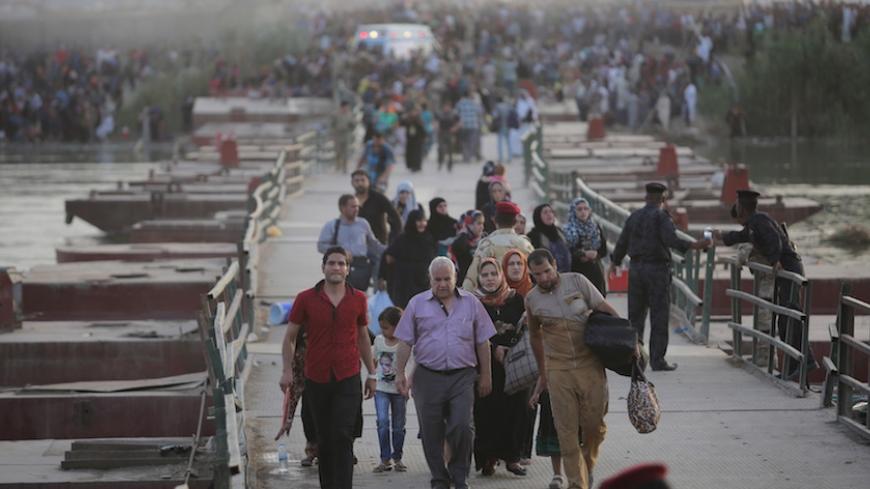 Displaced Sunni people, who fled the violence in the city of Ramadi, arrive at the outskirts of Baghdad, May 19, 2015. - REUTERS

While the Islamic State (IS) managed to occupy most of Anbar province and to raise its flags over the local government buildings in Ramadi on May 17, Iraqis blamed each other for the defeat. During a time requiring national unity, the Iraqi political scene is once again witnessing its downfall through internal rifts. In the meantime, the humanitarian aspect of these events, i.e., the arrival of tens of thousands of displaced people from Anbar to Baghdad, did not get the attention it deserved.

The unsurprising fall of Ramadi was one of the calamities faced by the authorities with confusion and general lack of awareness. On April 19, thousands of people from Ramadi and the surrounding areas were displaced to Baghdad. According to a UNHCR statement published April 21, the number of displaced from Ramadi reached 114,000. The government's position was surprising: They assured the displaced people that Baghdad is not under any threat, and rather blamed them for leaving and raised suspicions surrounding them doing so.

One month after this displacement, Ramadi fell into the hands of IS. Most of its residents had left and thousands more left during its fall.

Sheikh Aref al-Dulaimi, a prominent tribal figure from Ramadi, told Al-Monitor that the security services inevitably knew what the people knew, which is that IS had been transferring fighters and weapons for two months into areas under its control in Qaim, Tharthar and the area around Fallujah, as well as the towns of Hit, Anah, Rawa and Ratba.

Dulaimi, who also fled Ramadi, said, “As we crossed Bzebez point on our way to Baghdad, we were accused of dealing with IS. Yet we escaped inevitable death by the hands of IS.”

Despite this fact, media outlets close to the authorities talked about something completely different from April 19 to May 18. The media claimed that the entry of displaced people into Baghdad aims to bring down the capital, based on statements issued by security and political leaders May 17. The latter disputed the existence of any justification for this massive and sudden displacement and described the refugee exodus as a Trojan horse.

As a result of these positions, Ramadi's displaced faced complex procedures to enter the capital of their country, including the requirement of a sponsor.

Brig. Saad Maan, the spokesman for the Iraqi Interior Ministry, conveyed another picture of the government’s behavior with the displaced people. He told Al-Monitor, “The ministry did everything it can to host the largest number of displaced people without neglecting the security imperatives in Baghdad.”

“There are a lot of exaggerations with respect to the sponsor issue," he said. "The Iraqi security services are trying to work with the available means to accommodate tens of thousands of people. The government issued strict instructions to deal in a humanitarian manner with the waves of displaced people and to provide them with all the necessary requirements.”

Maan’s statement does not deny the existence of abusive procedures toward the displaced people of Anbar, which stirred numerous reactions. In a speech aired May 16, IS leader Abu Bakr al-Baghdadi stated that these procedures represent how Shiites treat Sunnis, calling on the people of Anbar to return to their homes.

The displaced people of Anbar did not respond to Baghdadi’s call, just like hundreds of thousands of displaced people from Salahuddin, Diyala and Mosul before them. These people refused to return to their cities, preferring to live as refugees in difficult conditions under Baghdad’s government or the Kurdistan Regional Government (KRG) rather than living under the rule of IS.

Amid the crises of receiving an influx of displaced people, two approaches emerged:

The first has been adopted by the KRG, which since 2006 has imposed the sponsorship system on Arabs when the security situation in the Kurdistan region was threatened by security breaches. But when faced with the exodus of refugees from Mosul in June 2014, the KRG lifted the condition and hosted the displaced, providing them with needed assistance. This had a profound social impact and eased relations that were strained between Sunnis and Kurds for years.

The second approach has been adopted by Baghdad toward the displaced, particularly the displaced people of Anbar. This is an approach of strained relations, doubts and fears, and has led to the loss of an opportunity to achieve decisive social progress with respect to Sunni-Shiite differences by winning over the displaced.

This can be seen in the official position of the government, which eventually opened the gates of Baghdad in front of the displaced. It is related to and confirmed by the positions of the social elites, political parties, the media and security forces. Instead of turning the displacement of Anbar’s residents to their capital into an opportunity to consecrate unified action to fight IS, these powers kept stirring sectarian strife, which constituted a free service for IS.

Since the first major exodus of Ramadi's population on April 19, the political leadership committed grave errors. Not only did it fail to interpret the real cause of this displacement, but it also questioned the political backgrounds of displaced people and their knowledge of what was happening around them. The political leadership then reduced its own vigilance and ability to take prompt measures against IS, which ultimately took over the city.

The leadership continued its wrongful interpretation by failing to embrace the displaced on the human and national levels, even though in doing so it could have improved the deteriorating relations between Iraq's Sunnis and Shiites.

Real opportunities were lost so far in terms of consolidation of national unity to confront the terrorist aggression. Despite previous mistakes, today there is a new Iraqi consensus on the need to free Anbar from the clutches of the terrorist organization.

There is no doubt that this consensus is a new opportunity to invest all energy to achieving this goal, by refraining from stirring and promoting sectarianism and aligning the actions of the army, security forces and the Popular Mobilization Units with the hopes of Anbar's population. Moreover, military units from the displaced themselves must undergo swift training to be one of the top liberators.