Baghdad is still debating the national guard plan that would seek to integrate Sunnis into the battle against the Islamic State. 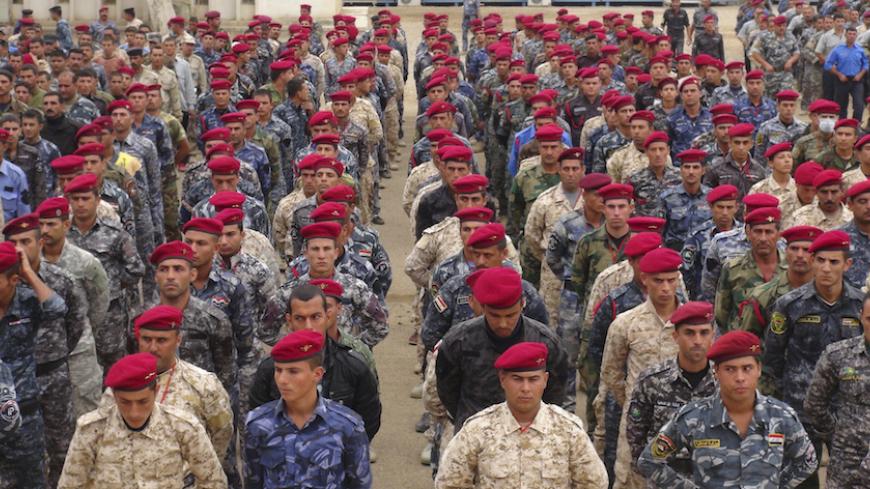 Sunni tribesmen take part in a military training, as they prepare to fight against militants of the Islamic State, on the outskirts of Ramadi, Nov. 16, 2014. - REUTERS/Ali al-Mashhadani

The United States has led an offensive against the Islamic State (IS) in Iraq since August. It has been backed on the ground by the Iraqi military with the support of US-led coalition forces and the Iran-backed Popular Mobilization Units that has forced IS to retreat from some of its territory in Iraq, such as Tikrit and regions around the capital, Baghdad, killing thousands of its militants in the process, with a death toll that amounted to over 6,000 as of January.

Iraq’s security forces are now battling in the region of Anbar, a stronghold of Iraqi Sunnis, spearheaded by this unlikely alliance. However, to succeed in this particular region, it needs to gain the trust of the Arab Sunni tribes.

The Sunni tribes played a key role in fighting al-Qaeda in Iraq (AQI), which rose after the US invasion in 2003. IS, an offshoot of AQI, has taken over large swaths of the country since June, playing on the distrust of local populations with Baghdad’s Shiite-led government of former Prime Minister Nouri al-Maliki.

The Iraqi security forces have since reversed IS successes, most recently by taking over the city of Tikrit, which was the hometown of Saddam Hussein. The fact that militias now patrol the city has not eased the distrust of powerful Sunni tribes, whose support is key in securing the territory seized from IS.

According to Niqash, an Iraqi wire service, pro-government forces in that region include Sunni fighters, who do not number more than an estimated 5,000. While there have been reports of some Anbar leaders, namely Shalan al-Nimrawi, calling to deploy the Popular Mobilization Units (Hashd Shabi), this stance may not “represent the collective stance of Anbar leaders,” a recent report by the Institute for the Study of War said.

“The Hashd Shabi can win over territory but cannot hold it without help of the Sunni tribes,” Iraq analyst Haidar Saeed told Al-Monitor in Amman. For that, winning the trust of Iraq's Sunni Muslims will be key in defeating IS.

“About 90% of IS forces are made up of Iraq ashair [tribes],” said Sheikh Raad Suleimani, an influential Iraqi figure and the head of the powerful Dulaimi tribe, some members of whom are believed to fight with IS.

Sunni grievances mounted under the rule of Maliki, who pursued a sectarian agenda. Protests in Sunni regions in 2013 swelled to tens of thousands of Sunnis gathering in the cities of Ramadi, Fallujah, Mosul and Kirkuk to which Maliki responded with a violent crackdown, further stirring dissent. A raid on a protest camp in Hawija on April 23, 2013, killed 44 civilians, according to a parliamentary committee’s report. When an IS group swept across a third of Iraq last summer, many Sunnis initially greeted them as liberators. Recent reports, such as the one in Der Spiegel, pointed to the involvement of Sunni members of Saddam’s outlawed Baath Party in aiding the extremists in structuring their organization.

Sheikh Najeh al-Mizan, who heads the founding conference of Salahuddin province, told Al-Monitor that Iraqi Sunnis have been marginalized and victimized by Iraq's Shiite-led government with many now fighting against the Shiite-dominated army. His views are typical of a broad spectrum of Sunnis in Iraq, including tribesmen and former Baathists.

Those who took pride in degrading AQI nearly a decade ago now see IS as the least bad option, as they have little trust in the new Iraq government headed by Prime Minister Haider al-Abadi.

According to Saeed, the Abadi government has come up with a series of measures addressing Sunni grievances that have been left unattended. Those include a greater participation in the political process and a global amnesty for prisoners who were not directly involved in terror bombings.

Thousands of Sunnis were arrested after the end of the US occupation in the wake of a wave of terror attacks in which they were not necessarily involved. “There is a lack of Sunni confidence in the political system,” Saeed said.

Now that the United States and the Iraqi government are attempting to defeat IS, in the long term they need to reach a deal with the Sunni tribal leaders and not just rely on Sunni politicians in Baghdad.

“The Sunni politicians in Baghdad are allied with Iran, they do not have power or representation,” Sheikh Ahmad Samarrai and Sheikh Raad Hawi, members of the Iraq tribal coalition, told Al-Monitor. Iraqi Sunnis feel that they have no real representatives. In addition, the two sheikhs said that many Sunni politicians in Baghdad were provided with significant financial assistance against which they were expected to turn a blind eye on pro-Iranian policies.

The process of restoring trust in Iraq’s Sunnis is further complicated by Iran’s heavy intervention in the country’s politics and its support of Shiite militias, and is thus heavily reliant on the introduction of several changes at the local and international level.

“The formation of a national guard that would be a local force that answers to the provincial government is a good idea, because it will ensure that Iraqis are protected by people from their own areas,” Saeed said.

Others such as Suleimani defend the idea of an independent province, such as the Kurdistan Regional Government. Other measures mentioned by Mizan are an amnesty for prisoners who were not directly involved in crimes or terror attacks. For Samarrai and Hawi, equal opportunities for all Sunnis and the reintegration of the Sunni military in the system are also important. In 2003, a decision known as the de-Baathification process was taken, allowing the dissolution of all Iraqi security services.

Samarrai and Hawi also believe that the empowerment of the Sunnis cannot take place without a more active involvement of the West and Arab countries in Iraq.

Tribal leaders appear skeptical of gestures of reconciliation by the Baghdad government. Some Sunnis, such as the Juburis, are fighting IS.

Creating momentum within the movement remains a long and difficult process. Years of occupation and political oppression, combined with a corrupt elite and foreign desires, have planted the seeds of an internecine war that are being reaped in Iraq today.

Meanwhile, Iraqi lawmakers are still debating the national guard plan. Even the optimistic prime minister says it will take at least another six months before the much-touted Sunni force could begin to fight.