Iraq's de-Baathification law has been a matter of controversy since its adoption in 2003, as some argue that the firm measures against former Baathists led to terrorism. 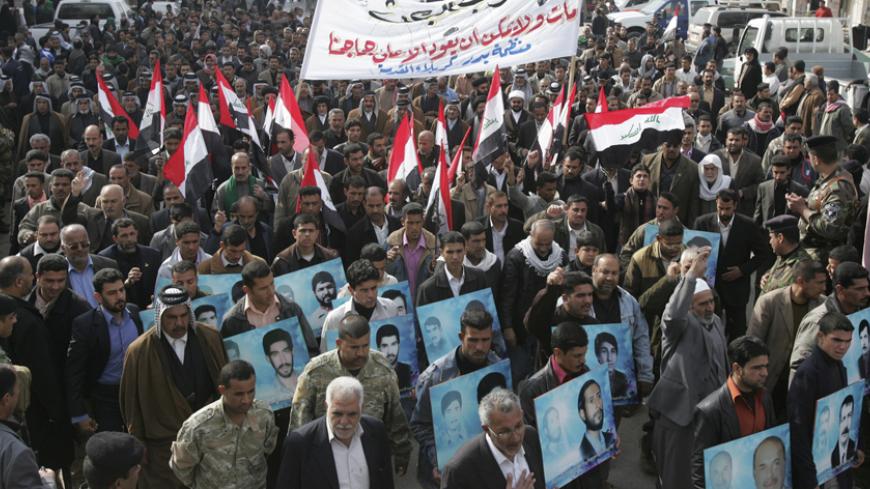 Protesters hold up Iraqi flags and pictures of their relatives who were killed during the Saddam Hussein era in a rally against the return of the Baath Party, in Karbala, Feb. 10, 2010. - REUTERS/Mushtaq Muhammed

Iraq's de-Baathification crisis resurfaced Feb. 2, when the Cabinet approved amendments to the Justice and Accountability Act, which deals with the country's ex-Baathists and the banning of the Baath Party. The political agreement that established Prime Minister Haider al-Abadi’s government also provided for the closure of the Baath Party issue, referring it to the judiciary. Now, individuals who would like to sue the former ruling party have the right to do so, yet their lawsuits must target individual members who have committed crimes, not the entire dissolved party.

The State of Law Coalition adopted the new law, with the Sunnis and the Union of Nationalist Forces in opposition. Yet, the new law is not in line with the aforementioned political agreement, according to which the Baath Party can be tried as a whole.

Since the de-Baathification law was first adopted in 2003 by US civil administrator Paul Bremer, Iraqis have been deeply divided on the law’s interpretation, application and usefulness. Sunni forces have always opposed the law, as they believe it primarily targets Sunnis, given that the Baath Party's most prominent leaders were Sunnis. The law was amended in 2008 and 2013, without resulting in a proper solution. The amendments often just reduced the number of people affected by the political ban or dismissals.

De-Baathification legislation seeks to prevent the Baath Party, which ruled Iraq from 1968 to 2003, from ever rising to power again. This goal was addressed in Article 7 of the 2005 Iraqi Constitution, which halted all the party's activities. It stipulates: “No entity or program, under any name, may adopt racism, terrorism, the calling of others infidels, ethnic cleansing, or incite, facilitate, glorify, promote or justify thereto, especially the Saddamist Baath in Iraq and its symbols, regardless of the name that it adopts. This may not be part of the political pluralism in Iraq. This will be organized by law. “

Yet, the Iraqi conflict on the issue does not center around the prohibition of the party — it centers around how to deal with the estimated millions of ex-Baathists in the country.

In the first version of the de-Baathification law in 2003, sanctions were imposed on a wide range of Baathists for participating in political life and working in state institutions. This provoked a crisis, given the large number of Baathists. In 2008, the Justice and Accountability Act was issued in an attempt to limit the sanctions to senior Baathist officials.

Sunni political forces, often supported by some Shiites and Kurds, continued to criticize the implementation of the de-Baathification measures, which they believed were used to eliminate political opponents and further personal interests. The implementation of these measures would also happen selectively, as many Baathists continued to occupy positions in the state, security forces, army and judiciary, all under the protection of political parties.

The legal aspect was absent in the application of the de-Baathification procedures, as the issue was only dealt with on a political level. The law was supposed to differentiate between those Baathists whose hands were stained with the blood of Iraqis, and those who were forced to join the party to obtain a job and never committed any crimes.

Iraqi political forces are so divided over the interpretation of the law that it seems a final solution will never be reached. Even the latest version proposed by the Iraqi Cabinet, which stipulates a one-year deadline for the implementation of the final de-Baathification procedures, was deemed by Sunni politicians to be "the worst" version so far.

The problem is that the issue of former Baathists is not only a matter of political consensus, but it is also a step toward long-term social reconciliation in Iraq. Furthermore, the previous de-Baathification procedures have left major complaints and grievances in their wake.

Abadi’s government has decided to decentralize the issue, which could be the key to resolving the de-Baathification issue in the long run. Every sector will deal with the Baathist file according to its circumstances and needs, so long as a time frame is not set.

The constitution bans and criminalizes any affiliation with or activity on behalf of the Baath Party. However, also according to the constitution, former Baathists are not to be dealt with as individuals. Every Baathist must be held responsible for his actions. The perpetrator of a crime must be prosecuted by the courts, and the innocent individual can carry on a normal life.

By turning the constitution into a unified mechanism, a comprehensive law will put forth the general guidelines on how to prevent the Baath Party from engaging in politics or infiltrating the political process.

As for dealing with individual Baathists, governorates and provinces can do so in accordance with the decentralized powers granted to them. Governorates such as Najaf, Erbil, Karbala or Dhi Qar — which have suffered tremendously at the hands of the Baath Party — have the right to be more rigid in dealing with ex-Baathists. In 1991, Saddam Hussein's regime killed thousands and destroyed entire cities with the help of the Baath Party during an uprising in southern and northern Iraq.

Meanwhile, governorates such as Anbar, Salahuddin and Ninevah — the former social and administrative backbones of the party — have the right to be more lenient, so long as they adhere to the law.

This decentralized approach is likely to raise criticisms. In the opinion of some, it could open the door to social division. Moreover, decentralizing the issue does not prevent ex-Baathists from taking advantage of these lax measures and grouping together to carry out a coup.

All scenarios are plausible. Many Iraqis believe that Baathists, instead of being contained, have been pushed toward extremism. Iraqis view the previous mistakes made on the ex-Baathist file as producing the current destabilized social structure and leading to terrorist control over Iraqi territories.

The de-Baathification process requires exceptional political efforts and new concise procedures that hold Baathist criminals accountable and integrate the innocents into the state.