The Iraqi parliament passed a de-Baathification law to ban any political activity by the Baath Party, but its consequences are still unknown as warnings continue about potential destabilizing effects. 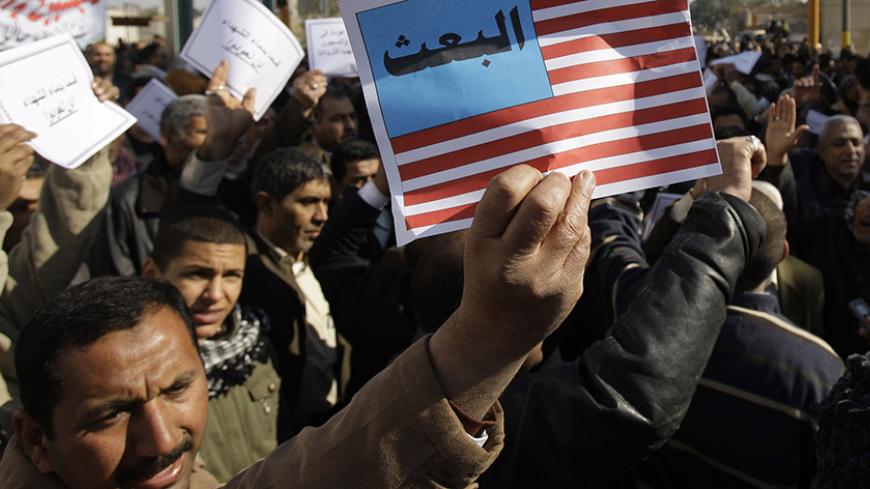 A protester holds up a poster symbolizing the US flag with the word "Baath" during a rally against the former Baath Party in Baghdad, Feb. 7, 2010. - REUTERS/Saad Shalash

BAGHDAD — Iraq’s parliament passed a de-Baathification law July 30, banning any political activity by the Baath Party under any name. However, the move did not end the controversy over the party’s social impact on the Iraqi community.

While some view the law as a victory for justice, others warn it may have negative political and social consequences for Iraq’s stability. Mohammed Ali Al-Masoudi, a parliament member for the Shiite National Coalition, said in a press statement July 30 that banning the Baath Party “is a step forward on the path to ensure Iraq’s stability militarily and politically, as the law will prevent Baathist elites from taking up managerial positions.”

Ousama al-Yasiri, one of the leaders of the 1991 uprising against the Baath in Babil, told Al-Monitor that the newly passed law is “a victory for the families of the Baath victims.”

However, there were some internal opposing voices in the parliamentary voting sessions. In exchange for passing the Baath ban law, some Sunni political parties called for amending the law as per the Justice and Accountability Act so as to allow some Baathists, including Saddam loyalists, to receive pensions.

Some external forces also spoke out against the law, such as Saudi Foreign Minister Adel al-Jubeir, who called for the “abolition of the de-Baathification law to ensure the unity and stability of Iraq.”

The Supreme National Commission for de-Baathification successfully dismissed many senior Baathists from state institutions, while the Supreme National Commission for Accountability and Justice made gains in the opposite direction, allowing many Baathists to resume their jobs, according to a former member of the Baath Party who declined to give his name.

He told Al-Monitor that the reason behind the prosecution of Baathists and de-Baathification was that “some ruling parties fear the return of the Baath Party to the [political] arena, as they have failed to lead the country since 2003,” the year the Baath Party was overthrown following the US invasion of the country.

“The timing of the de-Baathification law reflects fears of the future in the post-Islamic State phase, as the Baath Party has wide popularity in the Sunni-majority areas of northern and western Iraq. This frightens Sunni politicians in those areas, prompting them to forge alliances with Shiite parties to approve the law,” the Baathist source said.

However, according to him, the alliance between Sunnis and Shiites was not easy to form. Voting on the law, which was passed by a majority of 288 out of 328 present parliament members, had been postponed several times following the overthrow of the Baath regime as disagreements about it dragged on.

Amer Habib, a professor at the Faculty of Agriculture in the University of Babil who had two brothers executed at the hands of Saddam Hussein’s regime in 1991, told Al-Monitor, “The de-Baathification law will allow the judicial authorities to hold Baathists accountable for their crimes.” To him, justice was served when the law was voted in.

The political forces within the Shiite National Alliance also expressed relief and satisfaction over the passing of the law, according to Hashem al-Mousawi, a parliament member for the Al-Muwatin bloc.

“The law goes beyond Articles 200 and 210 of the Iraqi Penal Code, which provide for banning any ‘erroneous’ activities and which were used by Saddam’s regime to ban religious events, especially the Shiite ones such as the Husseini rituals or any other cultural or political activities against the regime,” Mousawi told Al-Monitor. He believes that the “law has ended the debate between Sunni and Shiite politicians on the subject.”

How the law will be used on the ground is another question. Parliament member Muhsin al-Saadoun told Al-Monitor, “The law is important because it will provide legislation to guide the judiciary in the trials of Baathists.”

He added, “The de-Baathification law is linked to Article 7 of the constitution, which includes jail sentences for Baathists who violate the law.” He stressed, “Had the law been voted on earlier, hundreds of Baathists would have remained behind bars.”

For his part, Jawad al-Shamri, the head of the media office at the United Nations High Commissioner for Human Rights, told Al-Monitor, “This law has little value after 13 years of tug-of-war, as it targets ideas and not the people who have infiltrated the allegedly democratic state.”

He added, “The law is about the de-Baathification in the media and in the public sphere, but Baathists will effectively remain in power.”

After so many sectarian wars and political conflicts, Iraqis do not need to throw Baathists in prison or dismiss them from their jobs as much as they need a true political and social reconciliation to lay the foundations for understanding and dialogue instead of hatred and revenge.