As Iraq’s political crisis intensifies, political parties should focus on areas of agreement, not escalting differences. 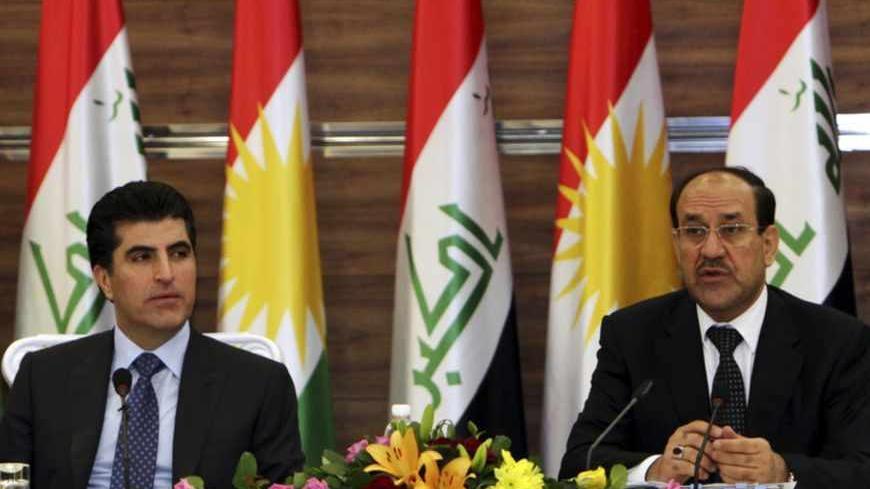 Iraqi Prime Minister Nouri al-Maliki (R) speaks next to his Iraqi Kurdish counterpart Nechirvan Barzani during a meeting of the Council of Ministers in Erbil, about 350 km (220 miles) north of Baghdad, June 9, 2013. - REUTERS/Azad Lashkari

The major players in Iraqi politics miss no opportunity to politicize the great controversial issues concerning the future of national reconciliation and the streamlining of the political process. On the contrary, they use them as election propaganda at times and as a form of reciprocal political miscarriage at other times.

The occasion for talk about the controversy that has emerged in recent days is a proposed law to criminalize the Baath Party put forward by the Shiite State of Law coalition, led by Prime Minister Nouri al-Maliki, as well as a law to "criminalize sectarian parties" put forward by the Sunni Mutahidoun bloc led by Parliament Speaker Osama al-Nujaifi as a counterweight to the former law.

The basic principles is that both laws are subject to the text of Article VII of the Iraqi constitution. It states, "No entity or program, under any name, may adopt racism, terrorism, the calling of others infidels, ethnic cleansing, or incite, facilitate, glorify, promote, or justify thereto, especially the Saddamist Baath party in Iraq and its symbols, regardless of the name that it adopts. This may not be part of the political pluralism in Iraq. This will be organized by law.”

This text is exceedingly confusing and complex. While one can grasp the ban on the Baath Party, tainted by its grim history ruling Iraq over the last three decades, it is difficult to find an agreed-upon definition encompassing all movements that might be described as inciting sectarianism and racism in Iraq today.

This is not because the definition of inciting racism and sectarianism is particularly elusive. There is plentiful experience in the world on demarcating limits to various levels of incitement. Rather, the problem lies in Iraq itself, insofar as it is a country which readily slips into political schisms.

Unfortunately, it is the Iraqi constitution, in the confused and hasty circumstances in which it was written and approved, which itself facilitates disparate and mutually irreconcilable interpretations in several key areas. Not the least of these involve the disputes raging to this day regarding the definition of the Kurdistan Regional Government, its powers and executive authorities, the limits of its legislative power, the manner in which wealth is divided, and the borders between various provinces.

Article VII belongs to the sort of ambiguous text in which the Iraqi Constitution abounds, thus forcing legislators to fill out the details with subsequent legislation.

The critical problem has never been in the interpretation of the text. The texts could be interpreted, categorized, and placed in a detailed legal framework according to consensus — if the political will to do so existed.

The problem, therefore, lies in the absence of political will of the Iraqi parties and movements. That will has not yet matured sufficiently to allow for a significant consensus that would enable providing a governing legal framework for the state.

Sustained inquiry into the two laws would be controversial at present, and would not yield results in any event since both laws have been put forward during the season of intense political bickering that precedes election campaigns and coincides with the ongoing crisis in relations between the major parties.

Given all that, it would be more productive today than at any previous time to seek out areas of common ground that cannot provoke crises. Especially so since there are laws which could be easily agreed upon, but have been held up by the ongoing controversy that has  brought parliamentary sessions to a halt for the last several years.