Tikrit, Saddam Hussein’s hometown, has paid dearly for its association to the former dictator, with residents feeling isolated and marginalized from the Iraqi political process, writes Ali Abel Sadah. 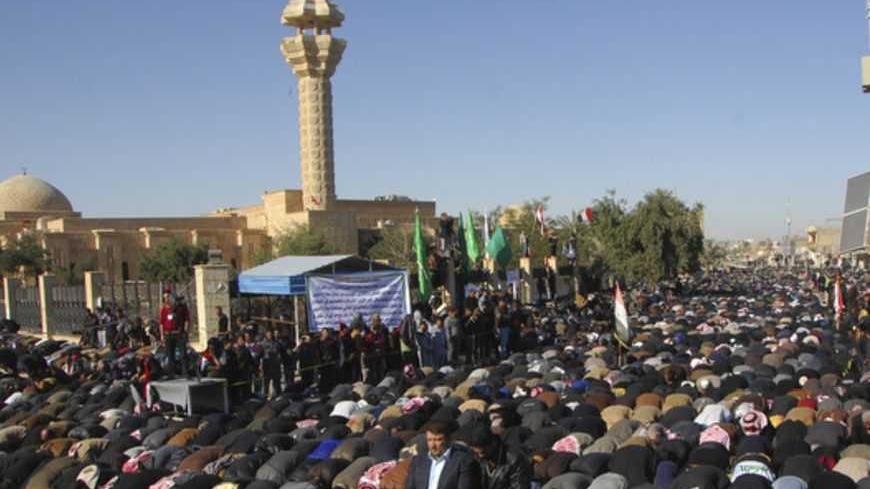 Tikrit, located in the north of Baghdad, is the hometown of the late president Saddam Hussein and home to an overwhelming Sunni majority. Ten years after the U.S. invasion of Iraq, it is turning from a center of rule to a city of contradictions.

The residents of this city are conflicted, having had to acclimate to the political status quo while overcoming their nostalgia for the son of their city, the ruler who stayed in power for over 30 years.

Tikrit is 160 kilometers (100 miles) northwest of Baghdad on the Tigris River, and has a population of 370,000. It is the capital of Salahuddin province.

The town is characterized by its tribal nature, but in the 20 years that preceded the fall of Saddam Hussein's regime, many of its residents were involved in politics and the military. They became prominent members of the Baath Party and senior officers in the Iraqi army.

It has been 10 years that the city of Tikrit has been without Saddam Hussein, who hails from one of its villages, al-Awja, where he lies in a large tomb. The tomb of Saddam Hussein received great interest from the public, as the Iraqi government feared its transformation into a shrine for the members of the Baath Party in Iraq.

The body of Hussein was buried hours after his execution on Dec. 30, 2006, in a hall dedicated for family events. The bodies of his two sons Uday and Qusay were buried in the garden there after they were killed in a battle with the US army in July 2003 in the northern city of Mosul, along with Saddam's brother Barzan al-Tikriti; Awad al-Bandar, the head of the Revolutionary Court (a judicial body supervised by the Baath Party); and his vice president, Taha Yassin Ramadan.

On the road leading to the village of Awja, passengers can see a banner covered with dust and bullet holes, reading "Awja 30 m," amid drought-stricken trees.

A relative of Saddam confirms that many Iraqis have visited the place without anyone preventing them from doing so. This was before 2012. In January of that year, the Iraqi government decided to close the tomb of Saddam Hussein and move his remains to another location, given the increase in the number of visitors.

Hassan al-Neda, Head of Saddam Hussein's clan, says, “The Ministry of the Interior was fearful of the volume of visitors to the cemetery.”

But before the tomb was closed, Iraqis would flock to it and spend hours there. Yasser al-Tikriti, a local journalist, said that "most of the visitors to the tomb of Saddam are from Salahuddin and Mosul," but asserted that "some of them were from the Shiite community.”

YouTube videos were disseminated featuring a popular singer standing in the hall by Saddam's tomb and singing sad songs lamenting the days of his reign. The singer is Sajida Obaid, who enjoys popularity among some Iraqis.

The Sunnis, who make up the overwhelming majority in Tikrit, believe they have lost power that it is now in the hands of the Shiites, and that the Shiites are out for revenge.

But the residents of Tikrit say they are witnessing economic progress in their daily lives. The salaries of the provincial employees were limited to 3,000 Iraqi dinars per month, the equivalent of one dollar, according to the exchange rate of the 1990s. However, the salaries increased after 2003 to about $400 per month.

But talk about economic improvement has not been associated with the development of infrastructure or strategic building projects.

Yasser al-Tikriti says life is normal in Saddam Hussein's hometown, but one cannot say that the residents of Tikrit are living in harmony or are satisfied with the existing political process.

The increase in the salaries of employees, the openness of the market and the expansion of the capital has not prevented the population from feeling nostalgic for Saddam. For a lot of Iraqis, Saddam Hussein was a strong man who managed to ensure security and stability during his reign.

Following decades of wars that marked the era of the field marshall, Saddam's military rank and the highest in the country, and since the fall of his regime in 2003, Iraq has witnessed daily acts of violence, faced a shortage in basic services and grappled with rampant corruption and a system of sectarian and partisan division in the state’s administration.

The security situation in the village deteriorated badly with the onset of the US invasion. Today, however, it enjoys a relative calm that is fraught with sporadic incidents, mostly for tribal reasons.

Sheikh Hassan, one of the elders of Tikrit, said, “I wonder how a European citizen would react if his country were invaded and his president executed. Saddam Hussein gave us a sense of security. The Americans brought chaos.”

The political elite in Tikrit, however, have a different perspective. This elite is trying to show that it is convinced that Saddam's era is over, saying that the government in Baghdad should not treat Tikrit as Saddam Hussein's city.

Suhad al-Obeidi, an Iraqi MP who hails from Salahuddin province, says that "the Tikrit residents are capable of adapting to political change and they have overcome their confusion about their situation after Saddam Hussein.”

But Obeidi, who says she spent years studying in Saddam Hussein's hometown, believes that “the government of Prime Minister Nouri al-Maliki deals with the city of Tikrit as the city that represents Saddam Hussein. This has made it pay a heavy price.”

But many of the city's intellectuals have a different opinion about Tikrit being the spoiled city of Saddam. They reject this idea, as they believe that Tikrit was also damaged by the Baath Party, and that Saddam's family, which is known by the name of al-Nasiri, exploited the authority to win power, influence and prosperity.

Obeidi continues, "I talked a lot with members of the Islamic Dawa Party [the ruling party led by Maliki] and told them you are punishing a city based on its history because it is associated with Saddam Hussein. You are looking at it as being a city opposing the democratic regime, and this is a very wrong attitude.” She added, “This way, the city is put in a kind of forced political and cultural isolation.”

The political elite in Tikrit is trying to distance itself from the legacy of Saddam Hussein. Meanwhile, however, it is ready to engage in the Iraqi political process if a set of factors are achieved.

The residents of Tikrit look at Maliki with a lot of anger and unease because, according to them, he is the man who approved the death sentence that was pronounced by the Iraqi Special Tribunal against Saddam Hussein. Meanwhile, the proponents of Maliki and the Dawa members think that Tikrit is the city of the man who ruled Iraq with an iron fist and suppressed many of his opponents. Thus, a positive relationship between the two parties is almost impossible.

For her part, Suhad Obeidi believes that "the sanctions imposed by the de-Baathification law were focused on the cities of Tikrit and Mosul because most of the military and political leaders who worked with Saddam Hussein descended from this province.”

Sunnis in Tikrit believe that when Shiite Prime Minister Nouri al-Maliki decided in recent years to open up to the Sunni community, the result was division in the ranks of this sect.

Obeidi explains, however, that Maliki dealt with the Sunnis in Anbar province (west of Baghdad) but not with those of Tikrit and Mosul.

She continues, "the elite in Tikrit and Mosul are statesmen and institutions, whereas Anbar is a desert city that is home to Bedouin people who do not have experience in management and professional political action.”