Several large military operations conducted in Sunni-majority areas of Iraq in recent weeks and mass killings have raised questions over whether a much-debated IS resurgence is actually in the making or whether the roots of the problem lie elsewhere. 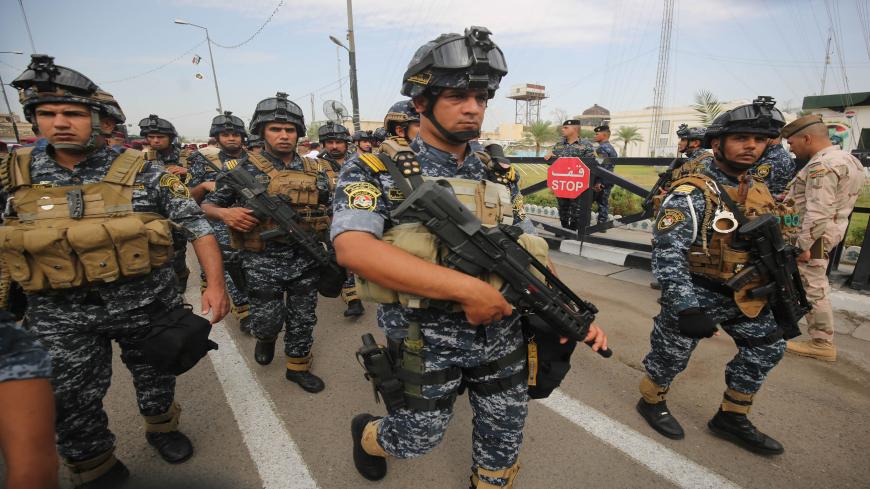 Iraqi security forces guard a symbolic funeral procession attended by high-ranking officials for Maj. Gen. Ali al-Lami, a commander of the Iraqi Federal Police's Fourth Division, who was killed in an ambush the previous day in Samarra in the province of Salahuddin, north of the Iraqi capital, Baghad, Iraq, Oct. 23, 2019. - Ahmad al-Rubaye/AFP via Getty Images

ERBIL, Iraqi Kurdistan — Mass killings, including ones in which attackers wore military attire, and counterterrorism operations on a near-daily basis have revived concerns about an oft-prophesized Islamic State (IS) "resurgence" in areas northwest of Baghdad.

While many analysts say low-level insurgency may continue for quite some time without this leading to any territorial control by the nonstate actors, locals contacted by Al-Monitor put the blame for the latest attacks on armed forces deployed there.

International coalition spokesman Col. Wayne Marotto told Al-Monitor March 14, “[IS] is territorially defeated. It continues to pursue an insurgency with hit-and-run tactics, murder, assassinating and intimidating local leaders. Despite a recent uptick in simple low-level attacks [the coalition] has not observed any indication of a resurgence.”

The previous day he had tweeted an article quoting a peshmerga officer as saying March 11, “The US-led coalition to defeat the Islamic State had carried out over two dozen airstrikes against the group over the previous day.”

When asked by Al-Monitor whether such an unusually high number of airstrikes had actually been conducted, Marotto replied, “I can’t confirm at this time.”

Six members of a family including women and two individuals linked to them were killed in three separate, targeted attacks March 11 in Albu-Dour, a Sunni-majority village in the southern part of Salahuddin province.

In claiming responsibility, IS said those killed had been acting as spies against them for the government-salaried Popular Mobilization Units (PMU). Iraqi security officials were quoted as saying that the perpetrators had infiltrated the village in military uniform.

Residents of Salahuddin province contacted by Al-Monitor said the root of security breaches stem from the presence of armed forces “with no connection to the territory” and were skeptical of the IS claims.

The armed forces referred to are Shiite-led PMU units, some of which took part in liberating the Sunni-majority province from IS between 2014 and December 2017, when Iraq declared victory over the transnational terrorist group in the country.

On March 14, Salahuddin tribal council chief Marwan al-Jbara spoke to Al-Monitor in Erbil on the Albu-Dour incident. He noted that the village, “15 kilometers [9 miles] south of Tikrit,” is under the responsibility of PMU Brigade 35 known as the Martyrs of Sadr Forces, which controls “a 25-kilometer [15.5-mile] area flanking the road between Baghdad and Mosul from northern Samarra to al-Awja,” the native village of former President Saddam Hussein.

Saddam was removed from power by the US invasion in 2003 and executed in 2006.

Jbara said, “[These nonlocal PMU forces] hinder people from going through their areas and have a lot of problems with the local community. This incident is the fifth one [recently] in this sector. The others occurred in nearby villages but together they have left dozens dead — all killed in cold blood. A committee was set up to investigate these incidents but nothing came of it.”

Though IS claimed responsibility for the latest attack, he noted, “[Locals] do not believe this, because there are so many problems between the forces [deployed in the area and the community itself]." Jbara claimed that the Albu-Dour incident made residents of Salahuddin province “realize that some want to effect demographic change in this area by pushing locals out.”

He added, “[The area] is very rich. It has many fish ponds and very fertile soil,” compared with desert and barren land in other areas of the country, and is strategically located.

In a previous interview with Al-Monitor in person in Baghdad in late January, Jbara had said that tribes and residents of the Salahuddin region wanted greater US-led coalition presence on the ground and were concerned about the steady drawdown over the previous year.

Since 2003, the area northwest of Baghdad has often been referred to as the Sunni Triangle. Tribes are important in the area and tribal fighters who took part in the Arab Spring were key to fighting al-Qaeda in Iraq in the years of extremist insurgency prior to the rise of IS.

Many Anbar and Salahuddin residents fled to Erbil when their areas were taken over by IS in 2014 and have only recently returned. Some who can afford to do so return to the capital of the Kurdistan Region of Iraq for short periods when in need of respite or rest, and some have bought or rent second homes there.

Arab internally displaced persons from several Iraqi provinces are also still in the Kurdistan Region of Iraq, including from a town in Iraq’s Babil province previously known as Jurf al-Sakr and now as Jurf al-Nasr, which was retaken from IS in 2014 but whose residents have not yet been allowed to return, allegedly because of Shiite militias preventing them from doing so.

Many of these, Jbara said in late January, are farmers and thus have no alternative source of income, with their land having been occupied for over six years even after IS was pushed out.

Links between Iraq’s Sunni Arabs — who for years were associated by many with Saddam, who committed massacres targeting the country’s Kurdish and Shiite populations but also Sunni communities that tried to rise up against him — and the country’s Kurdish population seem to have grown stronger in part because of this refuge the Arabs and others were given by the Kurdish Regional Government (KRG) during the years under IS.

Meanwhile, intelligence sharing and cooperation between the central government and the KRG concerning areas disputed between the two remain less than ideal.

Some progress, however, seems to have been made. Many of the most recent successes announced by the central government were made possible by intelligence from both local sources and KRG intelligence/security services, including the Jan. 28 killing of the head of IS operations in Iraq, a man known as Abu Yasser al-Issawi, in the southern Kirkuk province flanking Salahuddin.