Islamic State ramps up attacks in Iraq during Ramadan

A rash of seemingly coordinated attacks by the Islamic State have hit several areas across Iraq during the Muslim holy month of fasting, starting before dawn and resuming after sundown. 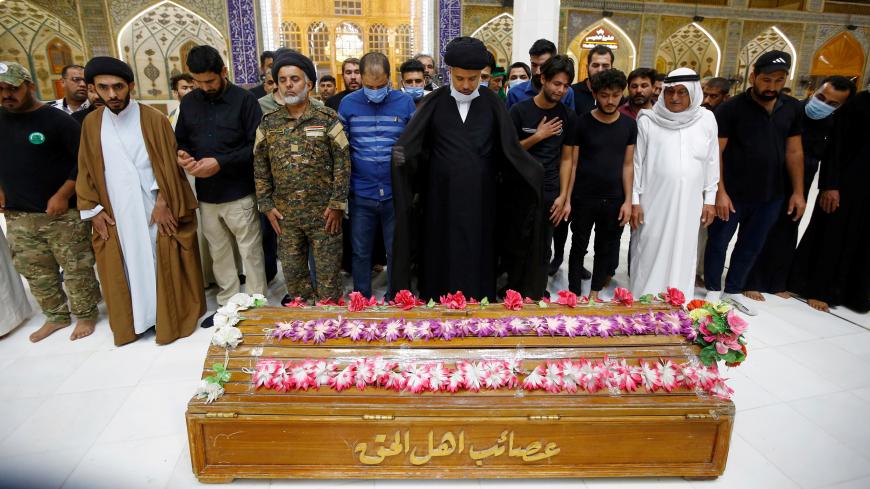 Mourners pray near the coffin of a member of the Popular Mobilization Units, who was killed in clashes with Islamic State militants in Salahuddin province, during the funeral in the holy city of Najaf, Iraq, May 3, 2020. - REUTERS/Alaa Al-Marjani

The first of several Islamic State (IS) attacks in Iraq started just before suhoor on May 2, the pre-dawn meal during the Muslim holy month of Ramadan prior to fasting, and lasted several hours, Salahuddin council member Subhan Jiyad told Al-Monitor via WhatsApp later in the day.

Most of those killed were Sunni locals from the Albu Issa tribe, according to another source who sent a list of the names of those “martyred.”

This first of several attacks in the area over a 24-hour period happened in Mukashifa, a town northwest of Samarra along the main road linking Baghdad and Tikrit. Samarra is a Sunni-majority city in central Iraq known for its Al-Askari Shrine, or Golden Dome Mosque, a place of pilgrimage for Shiite Muslims. The town is also the birthplace of former IS leader Abu Bakr al-Baghdadi.

“Six members of the local Popular Mobilization Units [PMU] were killed in the attack on a checkpoint,” council member Jiyad added. “Then, when reinforcements were sent in, three more were killed by an improvised explosive device [IED] set by IS.”

Another pre-dawn attack happened in Tal al-Dhahab in the Yathrib district southeast of Samarra.

The two attacks killed a total of 11 PMU fighters, Al-Monitor was told by a fighter previously deployed to the area with Saraya al-Salam that maintains an extensive network of contacts in the area.

The Yathrib district is in Salahuddin but borders on Diyala province, which has seen an uptick in attacks in recent months and which stretches from north and east of the capital to the Iranian border.

Capt. Isser Ali Rabea al-Azzawi, a border forces officer, had been assassinated in his home in Yathrib on April 30, also reportedly by IS.

After iftar on May 2, the post-fasting meal just after sundown, there were other attacks in Salahuddin province. No casualties were reported.

IS fighters then allegedly tried to approach Karbala from the direction of the southern Anbar town of al-Nukhyab, which lies between Iraq’s Saudi border and the city revered by Shiite Muslims for its holy shrines and historical importance, but were pushed back by PMU linked to the shrines.

In Diyala, meanwhile, there was an IED attack on a military vehicle post-iftar that resulted in one death, while three policemen were shot and killed and two others were wounded in an IS attack on a police station in al-Abara area of the regional capital of Baqubah.

The flurry of attacks was accompanied by initially inflated casualty counts for those that did happen and reports about other incidents that never even occurred, such as rumors of one in Isahaqi on May 2.

Iraqi security expert Hisham al-Hashimi noted in a tweet that the seemingly coordinated attacks serve to boost media coverage for the international terrorist group, and that “takfiri groups” hold Ramadan to be of special importance for combat operations.

Meanwhile, various Iran-linked PMU claimed, as they long have, that the United States is “helping IS” and that the latest attacks prove this.

The PMU had demanded even more strongly than previously that all foreign forces leave the country after the US drone strike on Kataib Hezbollah commander Abu Mahdi al-Muhandis and Iranian Gen. Qasem Soleimani on Jan. 3 at Baghdad airport. Members of parliament were reportedly warned to vote for a parliamentary resolution calling for this withdrawal or suffer unspecified consequences.

After a suicide attack on Kirkuk intelligence offices April 28, a parliamentarian from the province warned that international coalition intelligence had previously served to prevent such attacks, but that there is now a lack of such support after their withdrawal from a base in the area in late March.

In Salahuddin, local forces received support from Iran-backed factions when military aid from the United States initially failed to materialize in the immediate wake of IS taking over a major part of the province in 2014. The face of Kataib Hezbollah commander Abu Mahdi al-Muhandis, killed by a US drone strike Jan. 3 near the airport in Baghdad, has long figured heavily on billboards across the province.

Meanwhile, coalition airstrikes continue to target IS in Iraq. On April 25, Britain announced it had conducted its first anti-IS airstrikes in seven months on April 10, near Tuz Khurmato in Kirkuk province. International coalition spokesman Col. Myles B. Caggins III tweeted April 30, “Bombs away!” — linking to a video showing what he said was an airstrike on the Hamreen mountains the previous day.

The chairman of the Salahhuddin regional council, Ahmed al-Krayem, told Al-Monitor in a WhatsApp exchange in the early morning hours of May 3 that the previous day’s attack had been “a reaction” by IS after an “airstrike a week ago hit 15 IS [fighters] and two IS leaders were arrested — one a Turkish national and the other from Mosul,” adding that the area had “always been a target for terrorism” due to its geographical position linking the eastern and western parts of the country.

Krayem added, “There have been problems between the Albu Issa tribe and IS [i.e., its predecessors] since 2007, when the tribe attacked al-Qaeda and killed some [of them].”

He claimed these attacks had simply “strengthened the resolve of Albu Issa to fight IS.”

The view that the uptick in attacks is a reaction to stronger action against IS hideouts and remnants would seem to coincide with that espoused by Caggins, who had told Al-Monitor on April 26 that greater activity by IS was partially “due to the Iraqi security forces’ direct action against Daesh [IS] hideouts in the mountainous regions and rural areas in north central Iraq.”

However, the extent and apparently coordinated nature of the attacks may point to an attempt at resurgence amid a continuing governmental void and lingering issues between the Kurdistan Regional Government and the central government in Baghdad.