As attacks believed to be by Iran-linked armed groups continue amid questions over how long US forces will retain a presence in Iraq, Sunni Arabs are again seeking safety in the Kurdistan Region of the country. 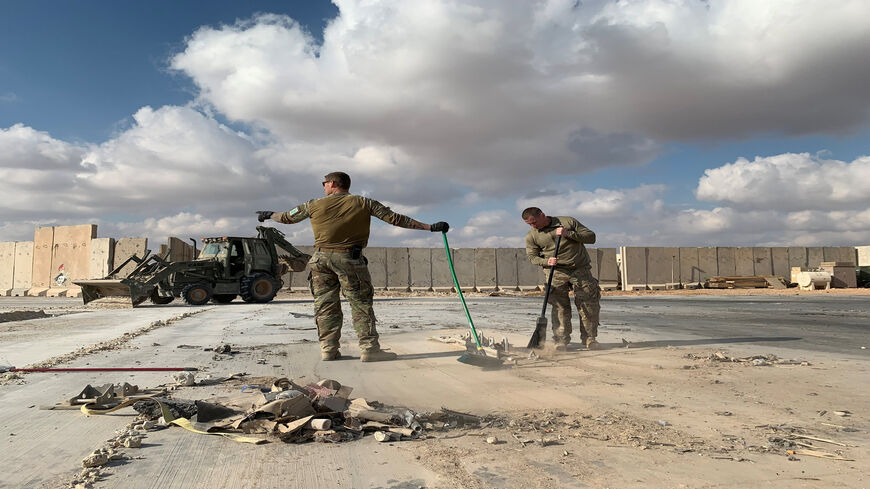 A picture taken during a press tour organized by the US-led coalition fighting the remnants of the Islamic State shows US soldiers clearing rubble at Ain al-Asad military air base, Anbar province, Iraq, Jan. 13, 2020. - Ayman Henna/AFP via Getty Images

A Sept. 11 drone attack on Erbil International Airport, which flanks an air base at which US forces are present, did not leave any casualties. It did, however, serve as a reminder that those wanting all US presence out of the Middle East, and who consider anyone working with the US forces an enemy, are able to conduct attacks even in a part of Iraqi territory with very close relations with the United States.

A deadlier attack on the same location earlier this year had been claimed by murky Iraqi Shiite jihadist armed groups with links to Iran.

Meanwhile, the Sunni Arab community from both eastern Syria and parts of western Iraq seem to be creating stronger bonds with the Kurdistan Region of Iraq — or at least seeing it as a place of refuge from increasing attacks by sectarian armed groups.

Long-simmering grievances against Iraqi Shiite armed groups linked to Iran are shared by both communities in areas where these armed groups continue to operate and many families from Iraq’s Sunni-dominant Anbar, Ninevah and Salahuddin provinces spent years in Iraqi Kurdistan after fleeing the Islamic State (IS) before being able to return to their home provinces, forming bonds with the local community.

Most estimates put the percentages of Shiite Arabs in Iraq at over 60% of the population.

Attacks on Erbil by Iran-linked groups now seem to be bringing Iraq’s Kurds and Sunni Arabs even closer together in ways that would have been unexpected during and immediately following the years under Saddam Hussein.

Saddam, who served as president between 1979 and 2003, was a Sunni Arab who ordered massacres that killed tens of thousands of Kurdish civilians in the late 1980s in operations that included the use of chemical warfare during the final phases of the Iraq-Iran War. He claimed that the Kurdish peshmerga, who were fighting the central government, sided with the enemy and that Iranians were using Kurdish villages to hide in.

In recent months, Al-Monitor spoke with numerous sources from Iraq’s Sunni Arab community who say they now — over 30 years later and following the war against IS, which was officially declared defeated in Iraq in late 2017 — have bought or rented long-term accommodation there, claiming they feel safest in this area.

Multiple sources from the Mashhadani tribe, for example, which is the largest in the Tarmiya area in the Sunni-dominant northern Baghdad belt, whom this journalist has interviewed over the years of covering issues related to Iraq’s tribal communities have in recent months asked to meet in Erbil as they claim that is where they are most free to talk and are at less risk.

One native of a Sunni-dominant area north of Baghdad who is a member of the Dulaim tribe told Al-Monitor in an interview in Erbil in early September that the Kurds, “or at least those in Erbil, linked to the Barzanis [are] respectful people,” while in Baghdad there are still “kidnappings, threats, weapons, car robberies — there is no real central government,” he claimed, saying that it has been this way for many years.

“It is chaos,” he claimed, adding that Iraqi Kurdistan instead is “peaceful.”

He noted that his home near the Taji air base, which the United States officially pulled out of last year, had been blown up by jihadist “terrorists” in 2013, after he had not heeded previous threats about having engaged in business with the US forces in some form. He said that he had lost close relatives in the attack and had himself been severely injured and had moved to Erbil after that. He still, however, frequently travels between central government territory and the Kurdistan Region for business reasons.

In recent years, meanwhile, Iraqi Kurdistan and those in its territory have come under repeated attack from its eastern neighbor Iran in various ways. The DC-based Abdorrahman Boroumand Center for Human Rights has said it “has identified more than 540 Iranians whose successful assassination or kidnapping have been attributed to Iran,” but which happened abroad; the majority of the incidents have occurred in Iraqi Kurdistan.

Parts of the Kurdistan Region of Iraq have for many years had to deal with dwindling water supplies as a result of Iranian dams and a threat that even more supplies would be cut, which might cause displacement from areas depending on this water supply for agriculture and other needs.

The Kurdistan Regional Government (KRG) has long requested that the Kurdistan Workers Party (PKK) leave its territory, and began being more vocal about this in 2020. The PKK has for decades used the mountains in northern Iraq near the Turkish border for training, indoctrination of recruits, hiding and cross-border insurgent activities.

The PKK is considered a terrorist organization by the United States, European Union and Turkey, all of which are major trading partners and/or provide significant financial and other support to the Kurdistan Regional Government (KRG) in Erbil.

In Sinjar, located in territory disputed between the Iraqi central government and the KRG, armed groups linked to Iran work closely with the PKK and local groups are trained by it.

Concerns that the United States may withdraw completely from both the few bases it retains a presence on in both Iraq and Syria as part of the international coalition against the IS — and thus leave the local Sunni Arab and Kurdish communities opposed to Iran-linked armed groups potentially more exposed to risks — have recently become especially acute following the American pullout from Afghanistan.

On Aug. 15, the Afghan capital was handed over to the Taliban, which retains close links with al-Qaeda and other groups designated as terrorist organizations. Sources this journalist spoke to this summer when reporting from Kabul and Kandahar said that both Iran and Sunni jihadist groups would be strengthened by the pullout of Western forces from the country.

The abbreviations stand for Erbil air base; Ain al-Asad base in Iraq’s western, Sunni-majority province of Anbar; Baghdad Diplomatic Support Center (BDSC), which is under the management of the US Embassy in Iraq; and the Joint Operations Command, also located in the Iraqi capital.

He added, “While Daesh [IS] has been defeated territorially remnants of Daesh remain a threat. CJTF-OIR will continue to work by, with and through our Iraqi and Syrian partners to ensure the enduring defeat of Daesh. CJTF-OIR does not formulate policy — we execute the policy of our civilian leaders and the military officers appointed above us.”

He stressed that the coalition mission had not changed, but did not comment specifically on a question about any US plans to withdraw entirely from the area.