Iraqis have been obsessing about Saddam Hussein’s body and the fate of his legacy. 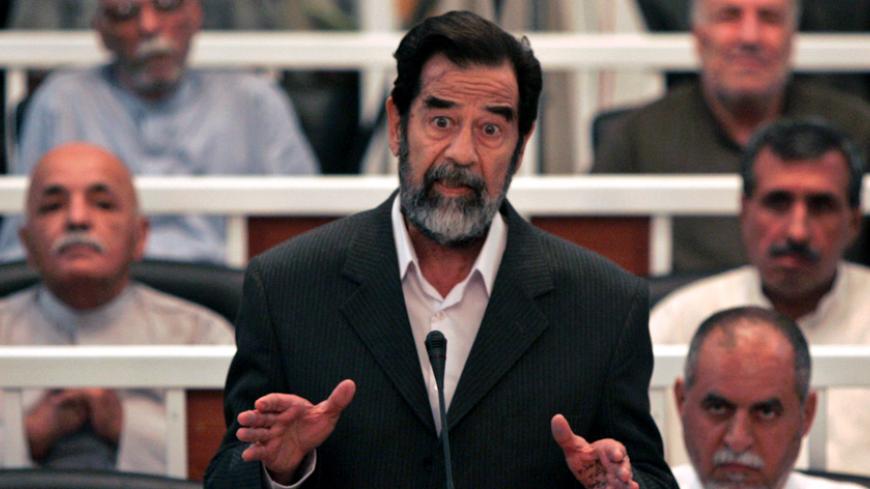 Saddam Hussein's execution and burial in 2006 did not exempt him from prosecution; he was still wanted even after his death. The grave was attacked and vandalized several times by various parties, while his body mysteriously vanished. The Tikrit battles have brought back talk about Saddam in the media. The conflicting parties there, whether the Popular Mobilization Units or the Islamic State (IS), all have motives to attack his grave, which made the issue of searching for Saddam’s body an important story in the Iraqi and Arab media.

Following his execution in December 2006, Saddam Hussein was buried in his birthplace of Ouja in Tikrit governorate. Merely days after his burial, on Jan. 13, 2007, rumors spread that men from Hussein Kamel’s tribe dug up the grave, exhumed the body and fed it to dogs. A cellphone video clip showed a number of men kicking and hitting a cadaver.

The clip, which lacked clarity, nonetheless showed a body that didn't resemble that of Saddam, while the men who appeared in it spoke with a non-Iraqi accent. Yet, the video gained great popularity, despite the deputy governor of Salahuddin governorate at the time, Hussein Jabara, denying the veracity of the incident, stating that the alleged footage was fake.

Hussein Kamel, Saddam’s cousin and the husband of his daughter Raghad, served as minister of military industrialization until August 1995. Saddam had him, his brother and sons killed in a famous incident that occurred in 1996, when he declared splitting from Saddam and stated his opposition to the latter’s rule.

Iraqis differ in opinion about Saddam’s legacy and memory. Even the three people whom Al-Monitor spoke to about the subject expressed different views. In a phone interview, Amer Mohamed, a computer engineer from Dour province in Tikrit governorate, said that Saddam was now part of the past, which Iraqis should forget in order to focus on their new reality instead.

To Suhail Jaber, a carpenter, this viewpoint is not realistic. Jaber told Al-Monitor in a phone interview that maintaining Saddam’s grave in Iraq provoked and angered him. He viewed it as a form of aggression toward Iraqis who suffered under Saddam’s rule, such as himself, with his father and brother having been executed in 1983 on charges of belonging to a banned political party.

The presence of Saddam’s grave in Tikrit may be a factor of opposition for some and of revolution for others. Some see Saddam as a symbol of opposition to the change in Iraq after 2003.

Alaa Hussein, a history teacher at a school in Baghdad, told Al-Monitor that Saddam was no longer just someone who once ruled Iraq and was now gone. He had transcended to become an ideology for some. He said this ideology was intermixed with a measure of political sectarianism that drove some to oppose, rebel and resort to violence. Even if Saddam’s grave was razed, that ideology would remain for a long time to come.

In March 2012, the Iraqi Interior Ministry issued an order to transfer Saddam's body to another location and close down his old grave under the pretext that it is a government building.

In this regard, some TV stations broadcast images of the Iraqi Interior Ministry’s order addressed to the head of Saddam’s clan — an order that contained very harsh and derogatory wording: “Get the filthy body of the criminal out of the government building and bury it in a civil graveyard.” In a statement on March 27, 2012, to the local Sumaria TV channel, the head of the clan, Hassan al-Nada, said that the Iraqi government was concerned about the increasing number of visitors to Saddam’s grave.

According to Hussein, this view is given credence, as the Iraqi government truly seems concerned that Saddam’s grave might be transformed into a hotbed of incitement against it. But the order was never implemented, due to the outbreak of protests in Tikrit and Anbar against former Prime Minister Nouri al-Maliki’s government at the end of 2012, which continued until Maliki left office.

Interest in the fate of Saddam is not confined to Iraqis alone, as other Arabs also share that obsession. Egyptian author Anis al-Daghidi published a book a few days after Saddam was executed, titled “Saddam Hussein was not executed.” In the book, the author claimed that he had 147 pieces of evidence that Saddam was not executed, and that the person tried and killed was a look-alike.

In August 2012, Arab media were abuzz with strange news, which included that Israel had stolen Saddam’s throat. The information was attributed to Israeli sources, which reported that former Israeli Foreign Minister Avigdor Liberman, in a lecture before Haifa University students, displayed Saddam’s throat and said “Israel has the ability to get its enemies.”

Despite the bizarre nature of this piece of news, it spread like wildfire in the media, to the point that one Arab newspaper published an article by Palestinian writer Hamad Sabah on Aug. 22, 2012, in which the author denounced what he called Israeli brutality, described Liberman as a “monster” and demanded that Arab governments take a firm stance toward Israel because of what it did to Saddam’s body.

The obsession with Saddam’s body does not end here. After IS entered the city of Tikrit in July 2014, and Shiite militants poured in to liberate the city, Saddam’s tomb was caught in the crossfire and became a target for both warring factions — with IS bent on destroying graves for ideological reasons, and Shiite militants never letting an opportunity pass to take revenge on Saddam.

As expected, the tomb was broken into and vandalized, as shown in a number of videos, some of which depicted Shiite forces setting fire to the tomb by targeting it with rocket propelled grenades, while another video purported to show IS blowing up the grave.

A number of videos captured during the recent battles in Tikrit reveal that some Shiite forces of the Popular Mobilization Units are fighting against IS and Saddam at the same time in Tikrit. These fighters are attacking the grave with missiles and machine guns while fighting a battle with the enemy in an advanced position.

The Maliki-owned Afaq Channel aired on Aug. 14, 2014, a report showing Saddam’s grave open and devoid of a corpse. The reporter affirmed that they had found the grave empty, as rumors spread in the media that Saddam’s daughter Raghad, who resides in Amman, transported the body to Jordan on an earlier date. But, as CNN reported in March 2015, Raghad denied those claims, leaving the fate of the body a mystery.

It seems clear that the importance of Saddam’s body and grave goes beyond being used for media propaganda among Iraqis and Arabs as well. For the issue is one where politics is intermingled with ideology and sectarianism — an issue that gains importance whenever the country’s crises intensify. As long as those crises endure, Saddam will remain wanted.

It does not appear that this reality will change anytime soon, as a news report on March 12 indicated that Iran sent special forces to Iraq, tasked with finding Saddam’s body. This will surely open the door for new episodes in this ongoing saga. Iran harbors strong hostility toward Saddam, as it accuses him of inciting the Iran-Iraq War in 1980, which lasted eight years.