As Iraq works to identify bodies found in the many mass graves spread across the country, its people are reminded of the successive bloody battles Iraq has gone through and continues to fight. 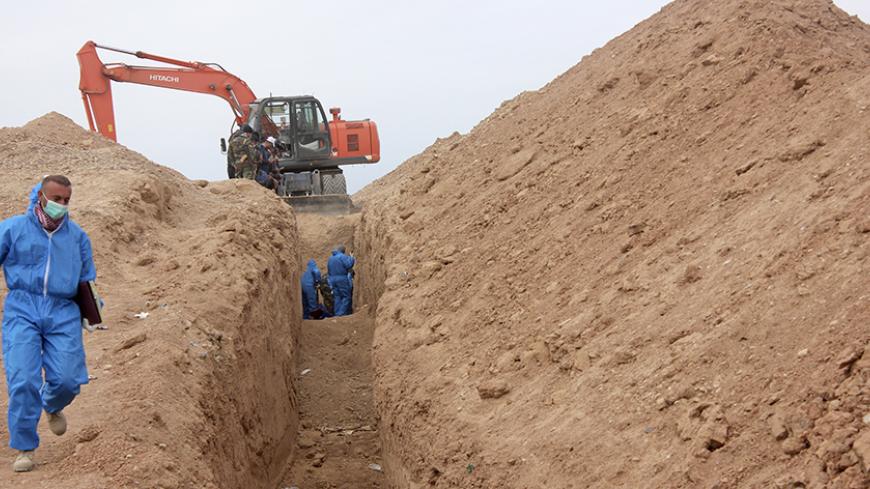 Men excavate remains from a mass grave on the outskirts of Saadia in Diyala province, Jan. 15, 2015. The mass grave contained the remains of more than 25 men who were killed by Islamic State fighters, a hospital official said. - REUTERS

BABIL, Iraq — As the body count continues to rise in Iraq's battle against the Islamic State (IS), it appears Iraqi authorities are finally interested in documenting the corpses being found in mass graves from previous wars.

Iraq has been hit by several successive wars: the Iran-Iraq War (1980-1988), Saddam Hussein's invasion of Kuwait in 1991 and the US military invasion of Iraq in 2003. These wars resulted in hundreds of thousands of unidentified victims.

Nikolay Mladenov, who represented the United Nations in Iraq, had said in 2014, "The number of missing persons in Iraq ranges from 300,000 to 1 million buried in mass graves in different parts of the country." Those figures apply to all victims of the many wars fought by Iraqis, including the unidentified corpses of those who died during the civil war after 2003.

The recorded and unrecorded victims of sectarian wars and infighting who have been lost in the dust with no names are a bleak and bloody stain in the modern history of Iraq.

The discovery of mass graves containing unidentified corpses has become commonplace in Iraq, which has grown accustomed to militarism and war. An anonymous source in the Iraqi Interior Ministry told the media Feb. 6 that Iraqi soldiers "uncover on a daily basis a number of unidentified corpses of men and women who were shot or strangled during acts of violence around the country."

The army just found a mass grave in February near the tiny town of Sufiyah, east of Ramadi. The town's population in a 2006 census was 147. The grave contained 40 corpses, including children.

In April 2015, shepherds found a body that had been unearthed by rain water in Maysan province at the Iraq-Iran border, where fierce battles had taken place. A mass grave was subsequently discovered. Retired teacher Hussein al-Khafaji from Babil was shocked — although such stories are common — when he learned that one of the corpses was that of his brother Ali, who disappeared on the battlefront in August 1986.

He told Al-Monitor, "A piece of metal, where the name and address of my brother were inscribed, was found among the retrieved corpses. We buried him according to Islamic tradition in al-Salam cemetery in Najaf."

After the Iran-Iraq War, thousands of people's fates were unknown as so many bodies were buried in mass graves without any documentation or evidence.

Political activist Ousama al-Yaseri from Babil province thought he would find the body of his missing brother Habib al-Yaseri — who had participated in the March 1991 uprising against Saddam’s regime — in a mass grave in Babil, but he was disappointed.

He told Al-Monitor, "My brother was taken away by Saddam’s security forces in March 1991 to an unknown destination, and he never came back. We thought he might have been buried in a mass grave that was discovered in Mahawil district, along with hundreds of men who … were executed and buried there after being accused of participating in the armed opposition against Saddam, but we found no evidence [he was buried there]."

After the fall of Saddam's regime in 2003, a number of mass graves were discovered in which hundreds of executed people were buried, most notably the mass grave in Mahawil.

In 2003, a 12-year-old Iraqi boy recounted how he was thrown with his mother and two relatives in the Mahawil mass graves and how he managed to escape because he had not been shot.

With Saddam's rule ended, Iraqis thought the need for mass graves was gone, but internal battles caused by sectarian conflicts brought them back.

Ali Hassan, a forensic medical examiner in Babil, told Al-Monitor, "After the fall of Saddam's regime, sectarian violence flared up and was mainly concentrated in Baghdad and to a lesser extent in the religiously homogenous areas such as central and south Iraq." The bodies, which amounted to "at least 18,800 in 2014 and 2015, flowed to the forensic hospitals to be subjected to autopsy to identify them."

The Ministry of Health issued instructions in 2006 stating that unidentified corpses should be kept refrigerated for a maximum of three months, then buried in cemeteries. Their personal effects are preserved and distinguishing marks documented, he said.

Hussain Hamid from the Sunni-Shiite town of Yusufiya, south of Baghdad, told Al-Monitor he believes his brother was killed in 2005, but his fate remains unknown. "He may have been buried in an open grave by the party that killed him or in an unknown location, since his identity was not revealed" and no one would have claimed his corpse, he said.

In collaboration with the Ministries of Health and Defense, the Ministry of Human Rights is currently working on opening the mass graves and conducting the necessary tests to identify the remains. The Human Rights Ministry will also see that soldiers' remains are delivered to their families.

Wadi al-Salaam cemetery in Najaf has "a lot of graves of unidentified men in Iraq," Haider Ali, the undertaker there, told Al-Monitor, pointing to the grave of someone who was killed in March 2007 in the city of Haswa in Babil, where sectarian killings between Sunnis and Shiites are numerous. "The corpse was examined at the forensic department. A sample of the body's DNA was taken in Babil. Some volunteers coordinated with the Ministry of Health to have the body buried in this cemetery," Ali said.

"There are hundreds of unidentified graves. They are difficult to count, given how large the cemetery is, with no database," he said.

Some of the gravestones explicitly indicate the treachery of the sectarian killings. One gravestone read, "The body of a 50-year-old man pulled from the Tigris River on Feb. 10, 2008."

Ali added, "The graves have significantly increased since the outbreak of clashes between the Popular Mobilization Units and the security forces against IS."

Hamza Genahee is a member of the local council in the Hashimiya district as well as a writer and civil activist who has participated in the fight against IS. He is familiar with the burial procedures for those killed in the battles between the security forces and IS on the Makhoul front early this year.

"Every unidentified corpse has a serial number. The corpse's physical evidence and DNA are also buried in the tomb under the supervision of the Ministry of Health," he told Al-Monitor.