The recent surge in suicide attacks has started overwhelming Iraq’s morgues, even though the country has become experienced in dealing with large numbers of deaths given its numerous wars since 1980. 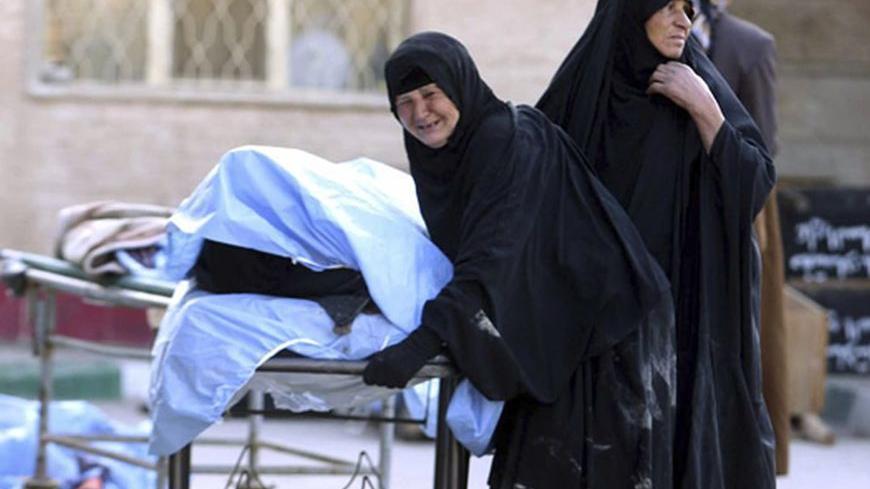 A woman cries over the body of her daughter outside a morgue in the holy city of Karbala, about 80 kilometers (50 miles) south of Baghdad, Jan. 21, 2011. - REUTERS/Mushtaq Muhammed

During the past few months, Iraq’s memory of the “morgue refrigerators” has returned — after having somewhat diminished over the past two years but never having completely disappeared.

Iraqis have many sad stories to tell about those cold rotting corpses covered with camphor. Hatem Hassan, a resident of Mahmudiyah — 15 kilometers (9.3 miles) south of Baghdad — told Al-Monitor how he searched for the body of his elder brother who went missing two months ago. Hatem visited various hospitals and labs until he found his brother’s corpse, still in the clothes he died in, preserved in the morgue refrigerator of Al-Naaman Hospital in the Adhamiyah neighborhood of Baghdad. Once he found his brother, he started worrying about something more important: those who had killed him.

Iraqis aren’t too afraid of morgues and of what goes on inside. They have gotten used to them since the Iraq-Iran war (1980-1988), which resulted in millions of deaths. The morgue refrigerator has become a symbol for the unknown and for searching for its puzzles among the corpses.

In his stories “Baghdad Wonders,” Iraqi writer Badr al-Salem writes about the unidentified corpses. A foreign correspondent named Miriam is searching for a missing person in the morgue. He writes, “We came back from the morgue. Everything was ugly. Dead bodies with no identities. And murders being carried out based on one’s [sectarian] identity.” In another chapter of the story, the author writes, “I was returning from the morgue with a trembling heart.” You can now find those stories in the so-called “hot areas” [areas plagued by terrorism] of Iraq.

In Diyala, Mosul and south of Baghdad — where there has been increasing acts of murder, most of which are of a sectarian nature — the morgues are crowded with parents and relatives looking for their missing kin.

In May, the Iraqi Human Rights Ministry revealed, “The number of Iraqis who went missing following terrorist attacks has amounted to 15,000 between 2003 and April 2013.”

In Babel — 100 kilometers (62 miles) south of Baghdad — every day dozens of people wait at the gate of forensic labs for permission to inspect the morgue refrigerators in search of missing persons.

Said al-Jabouri, a resident of Babel, told Al-Monitor that his brother — who died in an explosion in south Babel — has been kept in a refrigerator for about two weeks, and he is now preparing to receive the corpse.

Dr. Shaker Hassan told Al-Monitor, “The place cannot store corpses for two months because of the large number of new corpses arriving daily, especially this year. ... The crisis peaks when one explosion kills dozens, which overwhelms the ability to deal with the corpses, especially in these ‘hot areas.’ ... We take pictures of the bodies, log the information such as sex, height and distinguishing features and then show these to their next of kin.”

Elsewhere, dozens of citizens flock to the medical legal institute in Bab al-Maadham, Baghdad, as if they have an appointment with the dead, who in turn are waiting for someone to take them away from the cold refrigerator and bury them.

Speaking to Al-Monitor, Muhammad Ali, a doctor from Baghdad, described the morgue refrigerator as “a cold cave with metal doors designed to contain the unidentified bodies of those who have been murdered, died naturally or were assassinated. But since 2003, the morgues have been receiving mostly victims of violence and armed hostilities. ... In most Iraqi hospitals, each refrigerator holds about 200 to 300 corpses, some of which are intended to be kept cold while others are to be frozen. ... Iraq has a long experience with morgue techniques, going back to the 1980s. But many morgues have not been modernized since their inception.”

The father of Suhaila Hassan, who is a member of Babel’s provincial council, has been missing since 1991. Suhaila looked for her father in vain in all of Saddam’s “cold” prisons, as she called the morgues in an interview with Al-Monitor. Then, Saddam’s regime fell in 2003, and her father’s body was found in a large mass grave in Mahawil — 70 kilometer (43.5 miles) south of Baghdad.

Suhaila said, “It wasn’t easy opening the morgue refrigerator doors in many hospitals and forensic labs, especially since the name lists are not accurate and are not organized in a way that allows for easily finding the missing person you are looking for.” She recounted, "I saw some corpses were mutilated, while others were easily identifiable. Some were cut up, others were in [one piece]. Some were burned, others were bound. That has been the sight of death in the country since the 1980s.”

Those who visit the morgue refrigerators for the first time will be surprised to discover that bodies frozen to temperatures as low as -20 Celsius (-4 Fahrenheit) still give off unpleasant odors. Forensic pathologist Hassan Haidar told Al-Monitor, “We live next to the dead, who seem to be alive and waiting to be identified.”

He said it is hard to watch a relative refusing to acknowledge that a corpse is their son, brother or daughter, just because of the shock and difficulty of accepting the death of a loved one — for whom they have been searching for months.

He said that the painstaking search damages the nerves of many. So some resort to destroying the contents of the morgues' refrigerators.

One person’s body was moved from the refrigerator to the freezer. Then, the matter was settled: she will be buried within two months. Her family members have now become grave visitors. They carry incense and water to the final resting place of someone who died in a war or bomb attack.