Izzat Ibrahim al-Douri escaped the 2003 US invasion and led the Naqshbandi Army's insurgency against Baghdad. 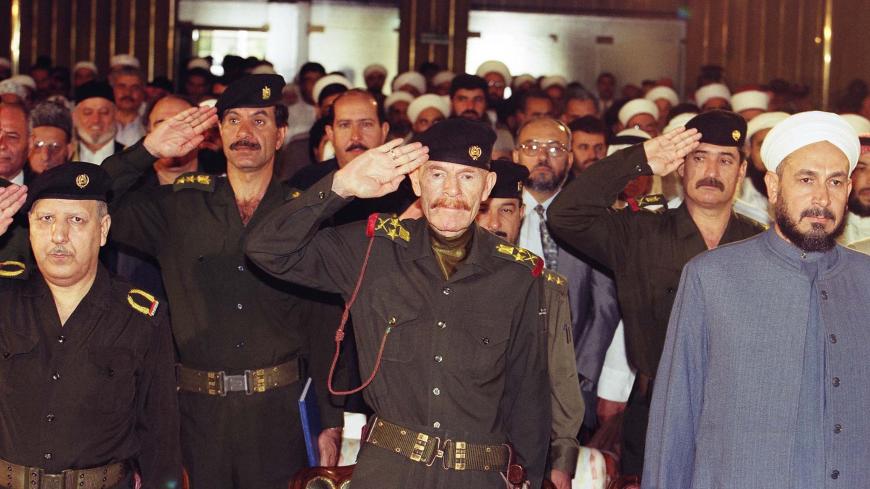 “Today he dismounted his horse, the knight of the Baath and the Iraqi national resistance,” a website affiliated with the outlawed party declared.

On Monday, Hussein’s daughter Raghad tweeted a message of condolence to supporters of the Baathist regime. It is not the first time in recent years the conspicuously red-haired former general has been reported dead, but the party has denied previous reports. So far, no evidence of al-Douri’s death has publicly surfaced.

Unverified audio and video recordings of al-Douri continued to be released, some with commentary on events in Iraq’s tumultuous post-invasion years.

Al-Douri, from Saddam’s hometown of Tikrit, was the highest-ranking Baathist official to have evaded capture during the United States’ toppling of the Iraqi regime in 2003, despite a $10 million bounty on his head. He served as vice chairman of the Iraqi Revolutionary Command Council was in Saddam's inner circle and one of his closest advisers.

He is believed to have played a role in the al-Anfal genocide against Iraq’s Kurdish population in 1988-89, the invasion of Kuwait in 1990 and the violent suppression of the 1991 uprisings in Iraq.

He was reported to have assumed leadership of the party’s underground remnants after Saddam was tried and executed in 2006.

During the US-led occupation he led the militant Naqshbandi Army, which later fought an insurgency against the Baghdad government after the United States withdrew in 2011.

He and his insurgent network were reportedly aligned with the Islamic State during the group’s vicious campaign in Iraq’s northwest, though in later recordings believed to be made by al-Douri he distanced his cause from that of the hard-line Sunni jihadists.

In 2015, Iran-backed Shiite militia Asa’ib Ahl al-Haq claimed to have killed al-Douri in an ambush on a vehicle convoy near the al-Alaas oil field near Tikrit.

Iraqi Gen. Haider al-Basri announced that al-Douri was believed to have been killed in the attack, but a month later the Baath Party released a recording purportedly made by him.