The Popular Mobilization Units, initially identified as a Shiite militia, is changing the course of the battles in Iraq with participation of Sunnis and Christians. 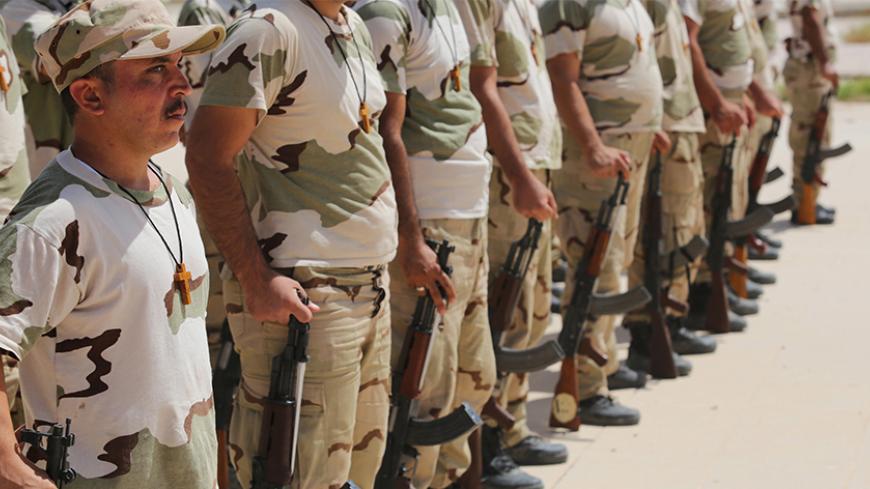 Iraqi Christian volunteers who have joined the Popular Mobilization Units with Iraqi forces against the Islamic State take part in training at a military camp in Baghdad, July 1, 2015. - REUTERS/Stringer

During the Arbaeen celebrations between the Iraqi cities of Najaf and Karbala, I came across a commander with a wound on his arm. Sabih al Hajj Abu Yahia from Basra is a founder of the Zeinab Akile Brigades, a part of the Popular Mobilization Units. Telling me why he joined the war, he said, “We couldn’t allow Sistani’s wishes to go unheeded.”

After issuing a fatwa, Grand Ayatollah Ali al-Sistani mobilized the militias after the fall of Mosul in June 2014 and stopped the advance of the Islamic State (IS) to Baghdad.

The Popular Mobilization Units, with the strength of 120,000 fighters belonging to different organizations, most notably Asaib Ahl al-Haq, Badr Brigade, Ali al-Akbar Brigade, Saraya al-Salam, Iraqi Hezbollah, Saraya al-Jihad and the Iraqi Islamic Movement, was accorded legal status and attached to the Prime Ministry. It is Shiite dominated but also has Sunni and Christian fighters. Abu Yahia, who was in the clashes with IS at Ramadi, has been spending his convalescence in a tent set up on the occasion of Arbaeen to assist Shiite visitors. Frequent sightings of the Popular Mobilization Units’ vehicles at Karbala, Najaf, Baghdad, Samarra, Tikrit and Baiji give a good idea about the size of the units.

Militiamen are annoyed when asked if they are getting assistance from Iran and the involvement of Qasem Soleimani, commander of the Iranian Quds Force. Abu Yahia, who fought in Ramadi with 1,500 fighters he recruited from Basra and Hille, said, “We get nothing from Iran. They invited us to Iran and we went, held discussions. Soleimani was an adviser, but not anymore. Our weapons and expenses of our fighters are met by the Iraqi government.”

Kassem Mosleh, the commander of the Ali al-Akbar Brigade that I visited at Karbala, had just come back from the front. A former commando, Mosleh was also unhappy with my questions about Iran. “Qasem Soleimani served as an adviser, expressed his views but had nothing to do in the field. I didn’t take a penny of assistance from Iran. Iraq is buying its own weapons. Iraqi businessmen contribute also. After the victories at Jurf al-Sakhar and Balad, the government began helping us. Our expenses now are met by the state and the Imam Hussein shrine. Of 5,000 soldiers under my command, 3,200 of them get a monthly salary of $800.” Mosleh refused to distinguish between Sunni and Shiite fighters. He said 1,200 of his soldiers are Sunnis. He added, “We are not an extension of any party. Thousands of Sunnis are fighting alongside us. Some Sunni tribes wanted to join [the Popular Mobilization Units], but the United States discouraged them by promising them weapons. At the end, the US did not deliver as many weapons as expected. Those who received the US weapons did not succeed. Jubur, Shammar and Azze tribes said they would march to Mosul with us, but the US wasn’t allowing them. The US will give them weapons only if they don’t join [the Popular Mobilization Units].”

Like many Iraqis, Mosleh was furious with Turkey. “Turkey is helping IS. One day they will regret it. Look, your people handed over their Mosul consulate to IS to conceal their support of IS. That was a ploy. Iraq is suffering because of its neighbors, of America and Israel. Also, it is a lie that Massoud Barzani is fighting [IS],” he said.

Shiite commander: Mosul decision will be made by Iraqis, not the United States

Balad was destroyed by clashes. The Sunni town of Qadisiyah was badly damaged. In Awja, where Saddam Hussein is buried, the flag of the Popular Mobilization Units is flying. Maysem Juburi of the University of Tikrit said, “We were closed for a year. We continued our education at Kirkuk. We have 20,000 students. Now security is assured and our university is open. Today, Tikrit tribes are with the government. [The Popular Mobilization Units] supported the people of Tikrit, opened the schools and enabled people to return to their homes.”

The mosque of the martyrs in Tikrit that IS had turned into a military post is rubble. Mazraat paid heavily for the war. At Baiji, the Fettah Mosque used by IS is also destroyed.

At Baiji, I found Col. Ali Hamdani, the front commander of the Ali al-Akbar Brigade, meeting some Sunni visitors. Hamdani fled abroad after the coup attempt against Saddam in 1991 and returned in 2003 and rejoined the army. He said, “After [IS] captured Salahuddin, Ramadi and Mosul, their dirty hands were reaching for Baghdad. With Sistani’s fatwa, their spine was broken. It was a good lesson for people here as well as the Americans and the British. Sistani’s fatwa was not only for Shiites. He said, ‘Sunnis are not our brothers, but are our blood.’ That was a fatwa for the defense of the country.” According to Hamdani, IS has lost most of its support among Sunni tribes, but some still support it under pressure. Hamdani said he found Turkey’s fear of Shiites entering Mosul as baseless.

“First of all, it is not factual. [The Popular Mobilization Units] is not a Shiite militia, but a force defending Iraq. Turkey is the No. 1 country supporting IS. Our Sunni brothers are fighting on the front lines together with us. Neither Turkey nor the US can stop [the Popular Mobilization Units], because we are the ones who make the decisions. We own this country. When the time comes, the operation will be launched. They told us we couldn’t recover Salahuddin, but here we are. When the government decides, we will take action.”

Sunni commander: We united for Iraq

Hussein Ali Abdullah, who leads the Jubur tribe at al-Alem, fully approved Hamdani’s words about Sunnis. Abdullah, who now commands the Sunni force, told his story: “After Sistani’s fatwa, I joined the Ali al-Akbar Brigade with four of my sons. There are 500 Sunnis in my unit. We had people also from Shammar and Kaysi tribes who joined us. Together with Ali al-Akbar Brigade we attacked the center of Salahuddin. Sunnis, Shiites and Christians of Iraq are united. God willing, we will crush [IS].”

Abdullah denied allegations that there was ethnic cleansing of Sunnis. “No, [the Popular Mobilization Units] is highly ethical. They protect families, help people, protect their properties. With [Ali al-Akbar Brigade’s] efforts, electricity and water systems were repaired. Schools opened. You talk of looting. Look at this building we are using. Before we moved in, we found its owner and asked for his permission. There may have been some looting, but those people don’t represent us. We don’t keep them among us,” he said.

I asked Abdullah what happened to those who were expecting IS to be a just organization. He replied, “True, there are some tribes that gave spiritual support to [IS] because they wanted to topple the Nouri al-Maliki government. They thought that would have ended their misery and oppression. But they realized that [IS] was confiscating their property, blowing up houses and prayer halls, making life miserable. They have woken up.”

At the end of the interview Abdullah had a message for Turkish people. He said, “They must not buy the oil [IS] is selling, even if it is cheap. When Iraq stabilizes, we will give you free oil. They extract oil for $10 a barrel and carry it to Turkey in tankers. When Turks were going to hajj pilgrimage, before they used to pass through here. We used to host them. We are one nation. For the sake of those glorious days, we have to support each other.”

Christian commander: We are fighting shoulder to shoulder with Shiites

Another factor easing the prejudice against the Popular Mobilization Units is the Christians. Of the 1.5 million Christians in Iraq in 2003, today there are 400,000 left. With the fall of Mosul, they evacuated that region. Now they formed their own Babylon Brigade. “Capt. Johnny,” one of their commanders, was actually a truck driver. He didn’t want to give his real name. Capt. Johnny, who is based at Camp Speicher with his troops, met me at the entrance of a military base near Samarra. He started by saying, “I came from Tel Keppe, which is attached to Mosul. Following Sistani’s fatwa, we met with our leader Rayan al-Kildani and decided to set up our own force; 1,200 people signed up. We have bases at Hamrin Mountain and at Speicher. We get our weapons from [the Popular Mobilization Units].”

When asked if Soleimani had met them when he was in this area, he said, “Yes, we met him, but I can’t tell you what we discussed. I trust you, but don’t look for Iran behind everything. We didn’t get any help from Iran. Iraq is buying weapons from many countries with its own money and distributes them. People are with us, and we get most assistance from Haram [Imam Ali Shrine]. If Iran helps, we will be honored.”

About their relations with other groups, Capt. Johnny said, “We fight shoulder to shoulder with Shiites. Shiites don’t live in Tikrit and Baiji, but they gave their lives to save those towns from [IS]. We don’t distinguish between Sunni-Shiite or Muslim-Christian. We are one Iraq.”

Iraq is fragmented politically and socially. The IS threat was instrumental in uniting some elements, but it won’t be easy for sectarian enmities to end.