Shiite Turkmens of Iraq, feeling that Turkey has failed them, are fighting with Iraq's Popular Mobilization Units. 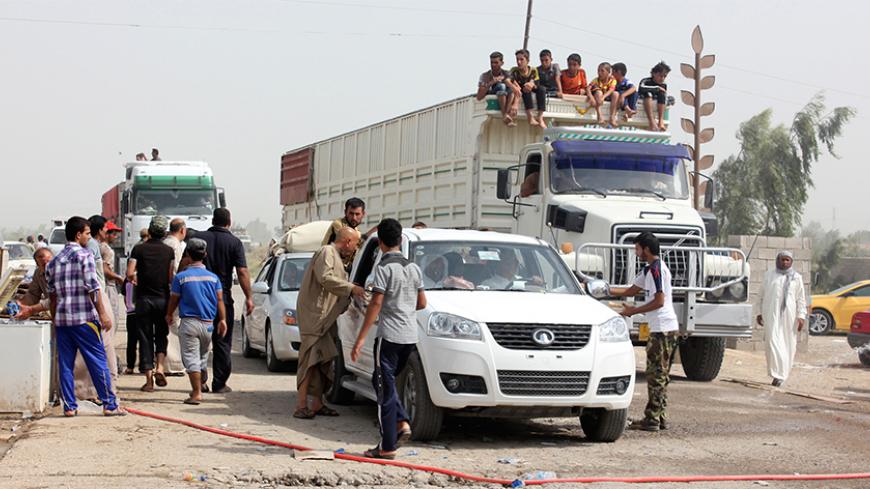 When I was touring the museum at the Imam Ali Shrine in Karbala in Iraq recently, a coffin was brought into the shrine's mausoleum. The coffin contained the body of a young Turkmen killed in a clash with the Islamic State (IS). Nowadays the coffins of many killed in battle are brought to mausoleums in Karbala and Najaf. Fighting is in the north; mourning is in the south. Shiite Turkmens of Mosul and Tal Afar have been uprooted with the arrival of IS.

They are fighting on the front lines of Iraq's Popular Mobilization Units. Local sources told me about 12,000 Turkmens have joined those forces. For example, of 5,000 fighters of the Ali Akbar Brigade, 500 are Turkmens from Tal Afar. Of the five wounded men I visited in early December in a Karbala hospital, two were Turkmens. Turkmens are also heavily represented in the Iraqi special forces of Surau al-Ittihadiya. During the past 18 months, Turkmens of Kirkuk and Tuz Khormato have been taking up arms.

The organizing of Turkmens under the Popular Mobilization Units has upset the plans of the Kurdistan Regional Government (KRG) to take over disputed areas. Before 2014, Turkmens had not joined the fight because they believed Turkey would ensure their rights. But more than 120,000 Turkmens fleeing Mosul and Tal Afar took refuge in places such as Baghdad, Najaf and Karbala, which were thought to be safer for Shiites. One of their refuges is the Imam Ali Shrine, which is meeting the needs of 1,250 families living there. Nearly everyone I spoke to in the camp, almost to the last person, expressed disappointment and anger with Turkey.

There are two main reasons why Turkmens have turned to Shiite authorities in the south of Iraq: First, Turkmens think the government of the Justice and Development Party (AKP) in Turkey has given up its protector role for Turkmens for the sake of Ankara’s economic relations with the KRG in the north. Second, they believe Turkey was responsible for the fall of Mosul to IS.

Turkmens I spoke with all referred to their desperation when they were not allowed to take refuge in Kurdish Erbil after they fled from Mosul and Tal Afar in June 2014 when IS attacked. Akram Sharif, who opened a tiny grocery in the Karbala camp, spoke about it: “After Tal Afar fell to IS, we sought refuge at Sinjar. IS killed 80 elderly and infirm who couldn’t escape. Then they captured Sinjar. I am laughing now when I hear people say, ‘The peshmerga [armed forces of Iraqi Kurdistan] saved Sinjar from IS.’ When we were leaving Sinjar, IS and the Kurds were a stone’s throw from each other. We left the area by passing between them."

Sharif believes Sinjar fell because the peshmerga cooperated with IS.

"When we left Sinjar we moved north and headed to Erbil via Dahuk. But the peshmerga stopped us at Kalak and did not allow us into Erbil," the capital of Iraqi Kurdistan. "I slept on the ground for three days with my children. We asked them to let us go to Baghdad, but they refused. Then the central government intervened. The peshmerga seized our identity cards and papers of our cars and told us they would be returned when we entered Baghdad. Then a convoy escorted by peshmerga delivered us to Baghdad. They did that to prevent us from entering Erbil and Kirkuk."

Taxi driver Hamza Sharif, another camp resident, said, “I waited for one month at Erbil’s entrance. [The Kurds] told us Turkmens couldn't pass. Our people died of thirst and hunger. Ibrahim al-Ibrahim, who had a lung illness, died because of a sand storm. We asked for permission to take his body to Najaf, but the Kurds did not allow it. We buried our people on the roadside.”

Abdulhadi Jerrah, who said his family lost three houses and three shops, added, “We didn’t get any help from Turkey. When we went to Sinjar, the Kurds sold us out. We escaped to this place and sought refuge with the imam.” The camp is laden with such accounts.

In the camp, I found a group of people chatting in the street. Among its members was the former Mosul representative of the Iraqi Turkmen Front, Ahmed Beghdali.

Beghdali said, “Some tribes are ready to do anything to once again take over the government as they did during the Baath regime. All the Iraqis could get killed; they don’t care.” Like others, Beghdali is disappointed and angry with Turkey. “Turkey made the worst mistake of all. It didn't protect us. They have been protecting the Kurds but not the Turkmens. I spoke about this repeatedly with Turkish officials. Also, Turkey did not take control of the Syrian border. IS comes and goes. The hardest hit by this were the Turkmens. Everyone is seeking their revenge on us. Their goal is to expel the Turkmens from the region. We dominated Mosul's economy and agriculture. We left and Mosul collapsed. Sunni Turkmens also lost. Some took refuge in Turkey; some went to Baghdad, Zakho and Erbil. They are victims like us. But they do have some people cooperating with IS.”

“Turkey made many mistakes. If it had wanted to, it could have stopped IS and Mosul would not have fallen. For one thing, Turkey dealt with the wrong interlocutors. The Nujaifi family did not work for the benefit of Mosul and cooperated with IS. They also dealt with the wrong men; they misled Turkey. Hashemi cooperated with IS to take revenge on the Baghdad government. Turkey backed them," Beghdali said.

"I went to Mosul Consul General Ozturk Yilmaz and told him they were getting bad information. I told him those people [the Nujaifis and Hashemi] were trying to disrupt Turkey’s relations with the Baghdad government. He got angry with me.

"If [then-Prime Minister Nouri] al-Maliki had been a strong dictator, Mosul would not have fallen. Iraqi officials got all the wrong information about Mosul. The consulate was not evacuated when IS was approaching. Of course not; [the Turkish consular officials] were cohorts. Turkish officials said, 'They won’t harm us. Those coming are only enemies of Maliki. Don’t worry, they are our men.'”

Asked why Mosul fell so easily, Beghdali replied, “Mosul did not fall in one day. It fell four to five years ago. It was already under IS control. Nobody could be appointed to that city without the approval of IS, which was collecting taxes and executing people. Mosul police chief Khalid Hamdani was cooperating with IS. Police were handing over anti-IS people to the organization. Gov. Nujaifi did not work one day for the central government. He worked with IS until he found out how he was fooled.

"Of course, Prime Minister Maliki also made mistakes," Beghdali continued. "There were three army brigades at Mosul — that is 70,000, plus 30,000 police. They abandoned their barracks in one night. These were also games. IS had all of 600 [fighters]. The army had both Sunnis and Shiites. Were the army Shiites the right people? Of course not. Everything was based on money. Arab tribes — for example, the Jubur tribes — were supporting IS. They worked together until they started killing each other. The army of the Naqshbandi [a Sunni religious order] was a front. They are a Baath creation. If they had been true Naqshis, wouldn't they have reacted to mosques being bombed, to people being murdered? They are all partners in these crimes. There was peshmerga-IS cooperation in the fall of Sinjar.”

There are allegations circulating that some members of the Iraqi Turkmen Front were working with al-Qaeda at Tal Afar, as has happened in the past. For example, in the aftermath of Shiite killings in 2007 at Wahdeh neighborhood, which led to 78 Sunnis being killed in retaliation, relief assistance from Turkey was distributed only to areas obeying al-Qaeda.

Beghdali spoke about the current situation, “The Iraqi Turkmen Front remained passive. If [the Iraqi Turkmen Front] had worked properly, it could have prevented a Sunni-Shiite split. Because al-Qaeda was useful, it made inroads with Turkmens. The front’s officials were not the right people [to deal with]. They served other interests.”

The Turkmens' reactions shed light not only on the drama of IS operations but on the mistakes of Turkey’s Iraq policies and how the AKP government became part of the tension in Iraq.