Many Iraqi Turkmen claim Turkey has given priority to its relations with the Kurdistan Regional Government at their expense. 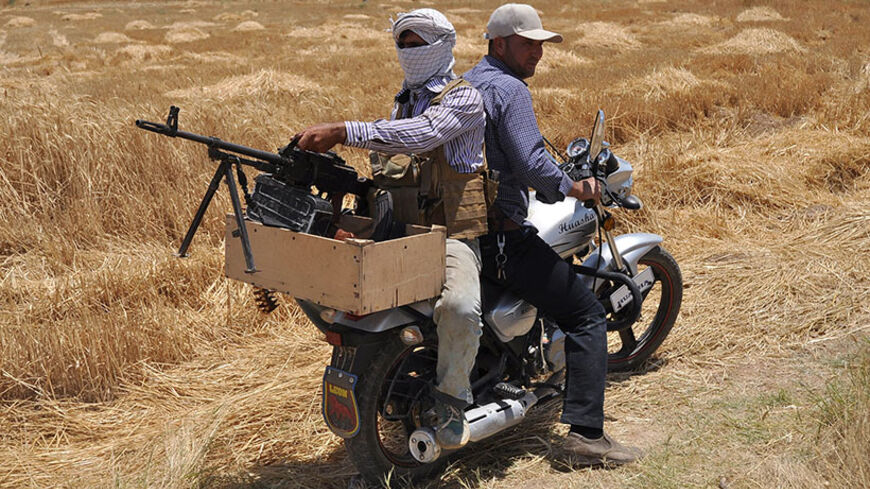 Iraqi Shiite Turkmen fighters take part in an intensive security deployment in the town of Taza, south of the northern oil city of Kirkuk, June 19, 2014. - REUTERS

ERBIL, Iraq – The turmoil in Iraq has left the Turkmen community squeezed. On top of Turkey’s new policy that encourages them to side with the Kurds, the peshmerga forces of the Kurdistan Regional Government (KRG) have assumed defense of a number of Turkmen settlements. While Sunni Turkmen criticize Ankara for abandoning its red lines, their Shiite kin blame it for the insurgency led by the Islamic State of Iraq and al-Sham (ISIS) and Sunni tribes.

The Shiite arguments point to the logistical support ISIS receives at the Turkish-Syrian border and Turkey’s protection against extradition of Tariq al-Hashemi, a former Iraqi vice president who is supportive of the Sunni rebellion. The Sunni Turkmen, for their part, believe that Turkey has forsaken the Turkmen community to avoid damaging its developing strategic ties with the KRG.

The debate over Turkey’s role heated up after ISIS captured Tal Afar and then a series of Turkmen settlements: the farming towns of Karakoyun, Upper Sherihan and Lower Sherihan, on the banks of the Tigris in Mosul province; the town of Bashir, in Kirkuk province; the villages of Chardagli and Biryayci, south of Kirkuk; and the villages of Karanaz, near Baquba, and Bastamli, near Tuz Khormato, in Salahaddin province.

While strolling along the Kirkuk Citadel, local businessman Casim M. Kebapcioglu spoke to Al-Monitor about the Turkmen’s emotional estrangement. “We used to see Turkey as sacred, and the Turks as blessed. When I was a child in the 1960s, our elders would ask us to go ask for coins from Turks visiting the tombs of the prophets Daniel and Ezra on their way back from Mecca. We would keep those pennies as a sacred treasure. Today, Iraq means nothing but money, oil and trade for Turkey.”

Kebapcioglu is rather measured in his resentment compared to the much angrier people one comes across. Pointing to the Kurdistan flag flying over a military encampment the US forces left behind at Kirkuk’s entrance, he said, “Had the peshmerga attempted to capture Kirkuk in normal times, there would have been a bloodbath. But they took control of the city without firing a single bullet.”

The peshmerga have erected checkpoints on the road from Kirkuk to Riyaz and Havija, both outside government control, and set up a camp on the bank of the Zab, making the river Kirkuk’s de facto new boundary. The peshmerga hold the east bank of the river, while the west bank is in Arab hands. From the so-called Mektep Halid checkpoint up to the north along the Zab, earth-moving machines are building berms as a bulwark against possible ISIS attacks from across the river. A second encampment has been set up there, facing Multeqa village on the Arab-held bank. Pointing to the fortification, peshmerga commander Talib Farouq said, “We will defend Kirkuk against whoever shows up. The peshmerga are ready for anything.”

A bit further north, Mullah Abdullah village has been divided by the Kurds and ISIS. It is rather surprising to come across Turkmen soldiers in the ranks of peshmerga deploying on this frontline outside the KRG’s constitutional borders. When I jokingly coined the term “Turkmen peshmerga,” a Kurdish commander replied, “We have good ties with the Turkmen. I swear we are no different at all. Turkmen are fond of us and vice versa, we marry our daughters off to one another.”

In some Turkmen settlements, including the towns of Bashir, Taza Khormato and Tuz Khormato, the peshmerga and the Turkmen fought side by side against ISIS. No doubt, many Turkmen are grateful for the Kurdish shield, although others worry the Kurds will never leave the disputed areas they took and hold under their control during the crisis.

Anger with Turkey’s inaction is palpable. At the Kani Kircali checkpoint, between Erbil and Mosul, an elderly man traveling with Shiite Turkmen families packed into three pickup trucks introduced himself as Yahya as he showed a paper allowing him to reside in Kurdish areas. He grumbled, “I have a residence permit, but I cannot even enter Erbil. We are coming from Sherihan. We want to go either to Najaf, Karbala or Baghdad. I hope they let us go to the airport at least.” A young man by the name of Huseyin chimed in, rebuking Turkey. “We fled the clashes. The road to Baghdad is closed and we are stuck here — not a single Muslim to stand up for us. Turkey keeps saying the Turkmen are brothers, but why isn’t it doing anything? ISIS will butcher us,” he said.

The Shiite Turkmen are convinced they can be safe only in Shiite areas in the current turmoil. Ziya Abbas, an academic from Tal Afar, spoke with Al-Monitor about why Turkmen anger is running so high. He said, “This is the explosion of feelings accumulated [over the years]. In 2008, Shiite-Sunni strife erupted in Tal Afar after a truck bomb targeted Shiite Turkmen. Both sides suffered, but only Sunni Turkmen received humanitarian aid from Turkey. This had a huge impact on [Shiite] opinion of Turkey. Then, when the Syrian crisis broke out, they saw that Turkey nurtured the same al-Qaeda-linked groups that have befallen them here in Iraq. Also, many believe that ISIS got arms supplies via Turkey. Those groups are now openly targeting Shiites because of their sect. In Tal Afar, about 20% of Sunnis support ISIS, including people who have close ties with Turkey. This has fueled the indignation against Turkey.”