Factions in Iraq seem more worried about staking claims to territory and power than in fighting the Islamic State, and the result could be a prolonged civil war. 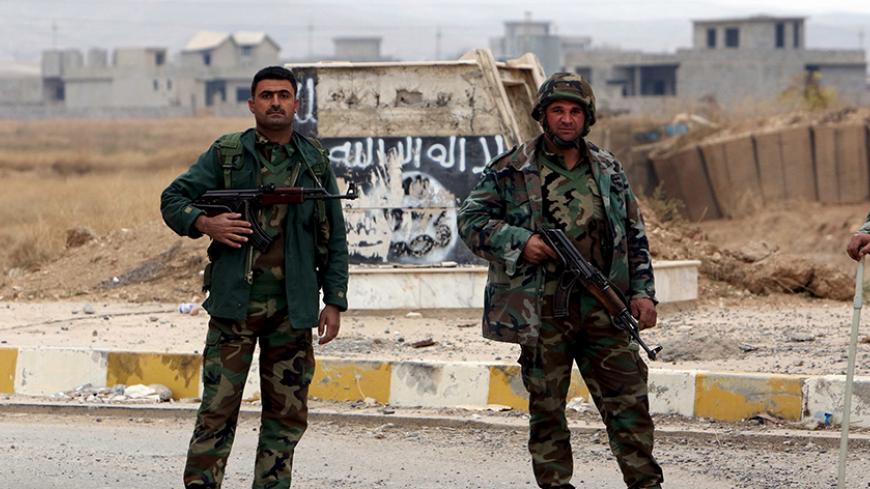 Kurdish peshmerga forces stand in the street in the town of Sinjar, Iraq, Nov. 16, 2015. - REUTERS/Azad Lashkari

BAGHDAD — The multi-ethnic city of Tuz Khormato has become a symbol of the ethnic conflict in Iraq between Arabs and Shiite Turkmen on one hand, and the Kurds on the other.

There are no precise statistics on the city’s components, but the numbers of Turkmen, Kurdish and Arab residents are roughly equal. The city derives its importance from its diverse ethnicities and sects in the middle of conflicting forces' strongholds in Iraq. Although it is under the rule of the central government in Baghdad, the Kurds aspire to annex Tuz Khormato to Iraqi Kurdistan. The city is close to Sulaimaniyah province in Iraqi Kurdistan and Kirkuk, which is a disputed area between the central government and the Kurdistan Regional Government (KRG) in southern Kurdistan.

On Nov. 12, armed clashes between Kurdish peshmerga forces and the Iraqi government's Popular Mobilization Forces resulted in a number of victims on both sides, as well as innocent civilians.

Each party accused the other of initiating the clashes. The peshmerga accused the Shiite Popular Mobilization Units and their supporters. On Nov. 14, Jabar Yawar, the peshmerga chief of staff, said, “The Popular Mobilization Units are burning houses and shops and shooting at security and party headquarters, especially the headquarters of the Patriotic Union [of Kurdistan, PUK] and the Kurdistan Democratic Party [KDP] in the district.”

In turn, the Arabs and Shiite Turkmens accused the peshmerga of seeking to expel them from the city and to annex it to Kurdistan. In this context, National Coalition MP Jassem Mohammed Jaafar said in a Nov. 15 press statement, "The Kurdish forces are burning properties and abducting Turkmen youths.”

The situation escalated. Attacks were conducted Nov. 29 in Baghdad against the Kurds, as armed groups affiliated with Shiite factions coerced Kurdish families from their houses and asked them to travel toward the Iraqi Kurdistan Region, in the north of Iraq. The Kurds strongly condemned the action, which was followed by meetings between both sides in Baghdad mediated by Iran and parties within the Iraqi government. The result was a relative calm in Tuz Khormato.

Kefah Mahmoud Karim, a media adviser to Iraqi Kurdistan Region President Massoud Barzani, spoke to Al-Monitor about the city’s administrative history, and emphasized its Kurdish character. “Historically, Tuz Khormato has been a Kurdish-majority district that was subject to demographic changes, when the Kurds were displaced from the district after Saddam Hussein’s regime separated it from Kirkuk and attached it to Tikrit city in Salahuddin in 1976.”

However, Qasim Mozan, a writer and editor at Iraqi newspaper al-Sabah, told Al-Monitor, “The Kurdish forces have ignited the clash in Tuz Khormato to achieve two goals: to drive the non-Kurdish population away from the city, and to prevent Anbar from being liberated from [the Islamic State (IS).]"

Some Kurdish forces consider finding an equilibrium between the Shiite government in Baghdad and the IS in the Sunni areas to be to their advantage, according to Mozan.

Yet Shirin Reza, MP of the Kurdish opposition Gorran bloc, considers both parties at fault. “The Shiite Popular Mobilization and Kurdish peshmerga forces are responsible for the [clashes] in the city,” she told Al-Monitor.

Reza added, “The peshmerga forces are part of the Iraqi defense system and have the obligation of liberating all of the Iraqi cities from IS. The clashes that occurred in Tuz Khormato could stir up sectarian and nationalist strife between the components of one country.”

“The Kurdish forces’ attempts to impose a fait accompli in the disputed areas will not succeed, because the Iraqi forces will bring the situation back to normal there,” Atiyyeh said.

The incidents in Tuz Khormato did not come as a surprise, as they have been part of the bitter conflict over the disputed areas claimed by both Arabs and Kurds since 2003.

Staffan de Mistura, the UN secretary-general’s special envoy for the conflict in Syria, defined the disputed territories in northern Iraq in a report issued by the UN Assistance Mission for Iraq in April 2009 when he headed it:

All of these areas border the Kurdistan region.

The situation remained calm in the disputed areas from 2003 until 2014, because all parties were cautious about the consequences of a conflict there. That changed June 10, 2014, when IS occupied Mosul, as well as a number of Arab and Kurdish areas such as Sinjar, Rabia, Zummar, Khanesor and Ankawa, including some of the disputed areas in Tuz Khormato, Salahuddin and Diyala.

The peshmerga forces took advantage of these developments and on June 11 deployed troops in areas from which the Iraqi troops had withdrawn in April 2014, such as Kirkuk, Ninevah plain and Salahuddin province, including Tuz Khormato, in the face of IS attacks.

The Kurdish claim on the new reality was confirmed by John Drake, a security analyst at the British AKE Group. Agence France-Presse quoted him in June 2014 as saying the crisis “could end up [with Kurdish forces] gaining further control over territory disputed with Baghdad, such as Kirkuk and Tuz Khormato.”

In fact, this had already begun. The Kurdish forces took control over Kirkuk in April 2014, which represents the essence of the disputed areas between Arabs and Kurds. Oil-rich Kirkuk holds a symbolic position for the Kurds.

The Kurdish forces’ control of the disputed areas could spark a long ethnic war, most notably over Kirkuk, after IS is forced out of the Iraqi territory. Based on that, some people might be skeptical of the KRG's claim that it intends to end the fighting against IS. Some, in fact, suspect just the opposite: that the KRG is seeking to extend the fighting, to consolidate the Kurdish presence in the disputed areas, including Tuz Khormato. MP Siham Moussa said Nov. 12 that “Barzani is IS’ partner and led the group to Iraq.”

The Iraqi government, however, worried about what the KRG would like to achieve, announced in March that it would “embark on the implementation of constitution Article 140 on the disputed areas as soon as IS is eliminated in those areas.”

Barzani had said last year that “there is no need for constitution Article 140 on the disputed areas to be implemented,” and stressed that “these areas have become part of the Kurdistan region, after the peshmerga forces have entered them.”

Naeem al-Aboudi, a spokesman for the Shiite militia and parliamentary bloc Asaib Ahl al-Haq, also known as the League of the Righteous, told Al-Monitor regarding Barzani’s statement, “Such a statement will ignite a nationalist sectarian conflict.”

This war of words could turn into a fierce civil war, under an already critical and complicated situation in Iraq.