Why Tuz Khormato clashes were more than just local skirmishes

In Tuz Khormato, Iraq’s Popular Mobilization Units and Kurdish peshmerga forces recently fought what appears to be a battle in the Shiite-Sunni power struggle, and not just a localized skirmish. 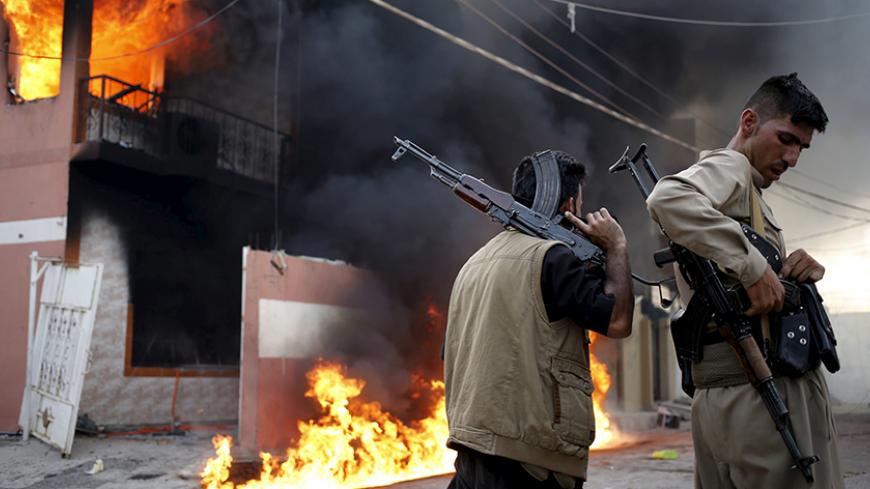 Kurdish gunmen hold their rifles in front of the burning house of a Shiite militiaman during clashes in Tuz Khormato, April 24, 2016. - REUTERS/Goran Tomasevic

The relative calm that had reigned for months at Tuz Khormato, Iraq, ended in the early hours of April 24 when an explosion in the town center prompted clashes between the Iraqi government-sponsored, mostly Shiite Popular Mobilization Units and the Kurdish peshmerga forces.

Reports said a militant lobbed a hand grenade into the house of Kurdish notable Goran Gewher. His bodyguards responded and the clashes broke out. The Kurdistan Regional Government sent reinforcements to the town in Kirkuk province.

The clashes ended after six Kurds and about 30 members of the Popular Mobilization Units were killed. Both sides agreed to withdraw their forces from the town.

The events appeared to be localized clashes, but were they?

About 60,000 Kurds, Arabs and Turkmens of Shiite and Sunni sects live in the town. Tuz Khormato is a disputed zone, claimed by both the Kurdish administration and the central government in Baghdad.

In 2014, when the Islamic State (IS) approached Tuz Khormato, Kurdish forces took control of the town. But when the Popular Mobilization Units also came to the area, tensions mounted.

What are the Popular Mobilization Units? After Ayatollah Ali al-Sistani, recognized as the top Shiite authority in Iraq, issued a fatwa to fight IS, Shiite tribes in southern Iraq formed the Popular Mobilization Units. These forces are now in Tuz Khormato and want to control it. Facing them are the Sunni Kurdish peshmerga. Tension between them escalated to clashes in November. There were fatalities, but the clashes ended with a cease-fire reportedly arranged by Iran.

This claim offers some light on the background of the clashes at Tuz Khormato. Although the mobilization units were set up by Shiite tribes, few doubt that Iran is behind them. The Tuz Khormato clashes may appear to be local incidents, but they are actually a new page in the history of hundreds of years in Shiite-Sunni discord.

Jabbar Kadir agrees. Kadir, a professor of modern Kurdish history who knows the region well, has taught at universities in Sulaimaniyah, Salahuddin, Mosul and Amsterdam.

Explaining the situation to Al-Monitor, Kadir said Shiite Arabs have a plan to clear out Sunni Arabs and Turkmens from the Diyala region and part of Kirkuk. The Shiite Arabs believe this is a vital project for Iran.

"It is important because this region is close to the Iranian border. The Iran and Baghdad governments share the control of Xanekin, Kelar, Kifri and Khormato. What is called the Shiite bloc begins at Iran, goes through Iraq and reaches the Shiites of Syria — and the real issue is not Khormato, but Kirkuk. If [the militias] reach Khormato, they can connect with Lebanon’s Hezbollah," Kadir said. "The shortest route to Baghdad goes through Diyala. It's vital to control Diyala to reach Khormato. With a foothold [in Diyala], they can expand toward Dakuk and Taza Khormato. There are already some Shiite Turkmens in the area. It is a Shiite project, but Shiite Arabs can't do it [alone], hence the decision to mobilize the Shiite Turkmens. Shiite Turkmens have historic grievances. They now want to get Iranian support to push back the Kurds."

Kadir insists the tension at Tuz Khormato is a reflection of the Shiite-Sunni conflict in the Middle East and in the Kurdish region and that it will continue. "The Kurdistan Democratic Party [in Iraq] is in alliance with Turkey. It has relations with [the Patriotic Union of Kurdistan] in Iran. We hear reports of Iranian generals getting killed in clashes. This shows the Iranian goal to increase its hold over disputed areas."

Kadir believes this is because of the lack of unity, saying, "The agreement in Tuz Khormato won’t last."

He went on, "There are dozens of groups and fighters. Each group has its own leader. They won't obey anybody else. Kurdish representatives don't know who to talk to. The peshmerga has a single leader. All peshmerga will respect his decision. The Popular Mobilization Units are not the same. They talk of peace but send orders to their units to make problems. I don't believe they will truly be willing to sign and respect an agreement."

Mehmet Alkis, a professor and researcher on the Middle East and the Kurds at Dicle University in Diyarbakir, Turkey, also believes the tension at Tuz Khormato is more than a local dispute. Alkis says Tuz Khormato is important to settling the future of Kirkuk and that Iran is definitely behind the Popular Mobilization Units.

"According to reports, the commander of the Iranian Revolutionary Guards, Gen. Qasem Soleimani, met Popular Mobilization commanders before they made an agreement with the Kurds. Iranian policies do not favor Kurds. [Some] Kurds are Sunnis, but Iran implements Shiite policy," he told Al-Monitor. "Kurds have never benefited from this Iranian position. Iran has some influence on certain Kurdish parties," especially the Goran ("Change") Movement. "Tehran doesn’t want [Iraqi Kurdistan Region President] Masoud Barzani to stay in power. Turmoil in the area serves Iranian interests. The Khormato clashes are part of this policy."

Alkis expects new tensions in the area. "Soon there will be a Kurdish independence referendum. Iran is trying to sabotage that," he said. "They don’t want Kurds to get stronger and become a regional actor. Iran will foment troubles in Erbil, Sulaimaniyah or at Soran, or perhaps again at Tuz Khormato. There may be new clashes between the Popular Mobilization Units and the Kurds."

There are reports that Iran, fearing a win by the Kurds, pressured the Popular Mobilization Units to reach an agreement with the Kurds to end the clashes at Tuz Khormato, which would have been against Iranian interests.

Today, life is back to normal at Tuz Khormato, but given Iran's determination to form a Shiite bloc to challenge the Sunni axis, new clashes can break out any time.