A rash of kidnappings, ambushes and bombs in Tuz Khormato are aggravating tensions between the ethnic components of the city despite efforts to balance security forces along sectarian lines. 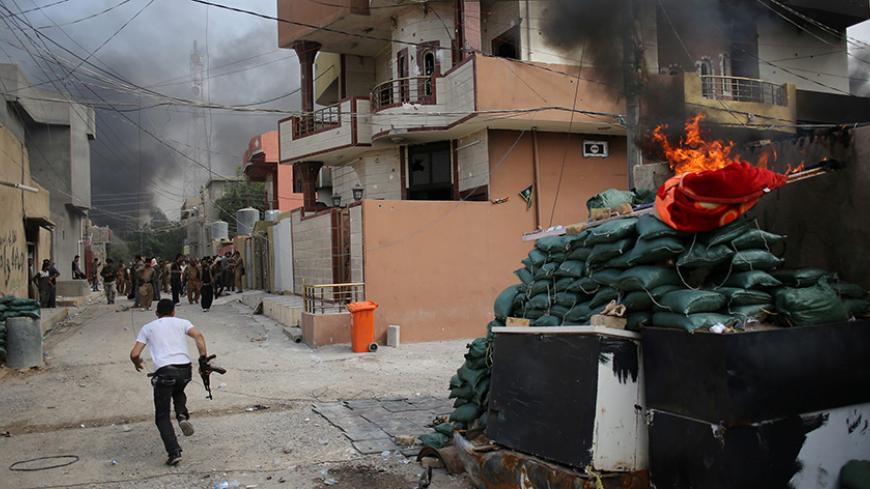 A Kurdish gunman runs across a street in Tuz Khormato during clashes between Shiite militia and Kurdish gunmen in Iraq, April 24, 2016. - REUTERS/Goran Tomasevic

TUZ KHORMATO, Iraq — The security situation in Tuz Khormato continues to deteriorate. On June 18, a car bomb exploded just outside the local headquarters of the largest Kurdish political party in the area, the Patriotic Union of Kurdistan, leaving three people dead.

The city's chief of police, Col. Mustafa Hassan Naseif Amerli, told Al-Monitor in an interview in late May that only two Sunni Arabs had been kidnapped in Tuz Khormato over the previous two months, presenting the figure as a sign of improved security.

A few weeks later, Amerli would be dead as well.

The restive area around Tuz Khormato has long been disputed between the Kurdish Regional Government-administered north and the Iraqi central government.

Relations between various ethnic-religious groups have been severely strained since the surrounding area was retaken from the Islamic State in late 2014 and Turkmen Shiite civilians took up arms as part of the Shiite Popular Mobilization Units.

Amerli, a Shiite, was ambushed late in the evening of June 16, reportedly by IS fighters, on his way to Sunni Arab villages outside of Tuz Khormato. Most of these villages remain uninhabited, their residents in camps for the internally displaced scattered around the surrounding area, almost two years after they were retaken from IS, due to restrictions placed on them by the Popular Mobilization Units. The villages were briefly taken by IS only to be retaken by peshmerga forces, according to local sources.

On June 16, several police officers as well as members of the Popular Mobilization Units who seem to have been traveling with them and peshmerga soldiers some kilometers away all died in what appear to have been near-simultaneous attacks at two locations on the same road.

Since June 19, reports of extrajudicial killings of Sunni Arab prisoners — with one tribal leader claiming that some 50 Sunni Arabs were executed by the Popular Mobilization Units in the Amerli prison — and the targeting and burning of homes of the same ethnic group have aggravated tensions.

A rash of kidnappings — almost 300, of whom “95% were Sunni Arabs,” the Kurdish mayor of Tuz Khormato, Shallal Abdul Ahmed, told Al-Monitor, while some media outlets report more — had brought the town under public scrutiny. Most of the Kurdish inhabitants of the city Al-Monitor spoke with said the Arabs have mostly fled to camps in the nearby provinces of Kirkuk or Diyala, where they are protected by the peshmerga, or elsewhere in the KRG area.

Over $2.7 million has been paid in ransom so far, according to Abdul Ahmed. He said that it was clear that the Popular Mobilization Units were behind many of the kidnappings, noting, “They have even joked about it to me, saying, 'How else are we supposed to fund our operations?'”

Sheikh Thaer al-Bayyati, the tribal spokesman for Salahuddin province and head of the prominent Albu Hassan clan, told Al-Monitor in an interview in Erbil that Amerli had been “extremely sectarian” and that members of the Albu Hassan clan had once saved Amerli’s life when IS was in the area in 2014.

Bayyati said, “He was traveling in a convoy of eight national police cars toward Amerli,” a Shiite-majority town in the area the police chief was born, “and would have ended up at an IS checkpoint if we hadn’t stopped him and shown him another route out.”

And now, he noted bitterly, most members of the Albu Hassan clan — which he said accounts for about 10,000 of the approximately 85,000 members of the al-Bayyat tribe across Iraq — are living in camps almost two years after their areas in Tuz Khormato and other parts of Salahuddin province were retaken from IS.

“Even I can’t go back, or I will be killed,” he said. “We know exactly how many of our tribe have joined IS: 263 people. We have their names and at least 3,600 members of the tribe have been arrested.”

Although there is no reliable data on the ethnic composition of the city prior to the problems with IS and subsequent arming of Shiite groups as part of Ayatollah Ali al-Sistani’s fatwa to take up arms shortly after IS took Mosul in June 2014, Amerli had told Al-Monitor in the May interview that most of the population in the city was Shiite Turkmen.

Amerli claimed that many Sunni Arabs remained and that those who left were “from the surrounding villages that had been under IS and who had come to the city afterward.” He went on, “Then there were retaliatory acts and so they left,” implying that the actions against the Sunni Arabs were because of perceived support for IS but refusing to comment further.

The mayor instead insisted that almost half of the city’s original inhabitants were Kurdish and that both Shiite Turkmen and Sunni Arabs had been minorities, but admitted that no exact figures are available.

“We have to rely on food ration cards and election results to even get a general idea,” he said.

Abdul Ahmed, like other Kurdish officials in the area who spoke with Al-Monitor in recent weeks, is wary of what the increasing power of the militias will mean. Nevertheless, he said, “We need the peshmerga and the PMU [Popular Mobilization Units] to stay until an ethnic balance is reached in the police force.”

An agreement between the peshmerga and the Popular Mobilization Units calls for the central government to recruit and train Kurdish police officers to address a current imbalance in favor of Shiite Turkmens.

No one that Al-Monitor spoke with — including the police chief, mayor and other local officials — had any idea when the agreement would be implemented.

The head of the Patriotic Union of Kurdistan for the province, a man known to the local population as Mullah Kareem, spoke to Al-Monitor about security concerns, including the kidnappings of several hundred mostly Arab residents over the past year. He said that there are “1,500 members of the police force" in the area, adding, "So if this many kidnappings, specifically of Sunni Arabs, are happening, not only do they know about it, but they are involved in it.”

The Popular Mobilization Units' spokesman for the northern part of Iraq, Ali Hashem al-Hosseini from the Shiite Badr militia, instead insisted to Al-Monitor in an interview that “Kurds and the PMU are like brothers.”

He went on, “We were both armed opposition forces” during the time of Saddam Hussein, he said, adding, “And even if there are problems, it’s like problems within a family. It’s normal. But in any operation we take part in, we are accused of burning, kidnapping, looting.” Hosseini claimed that “Gulf states” had accused them of taking part in atrocities in Fallujah.

“Everyone knows that the PMU are exposed to a fierce media campaign to ruin their reputation,” he claimed.