Iraq's Sunni, Shiite Turkmens fall out over IS

The six-week Islamic State siege of the Shiite Turkmen town of Amerli has exposed the little-discussed rift between Iraqi Shiites and Sunni Turkmens. 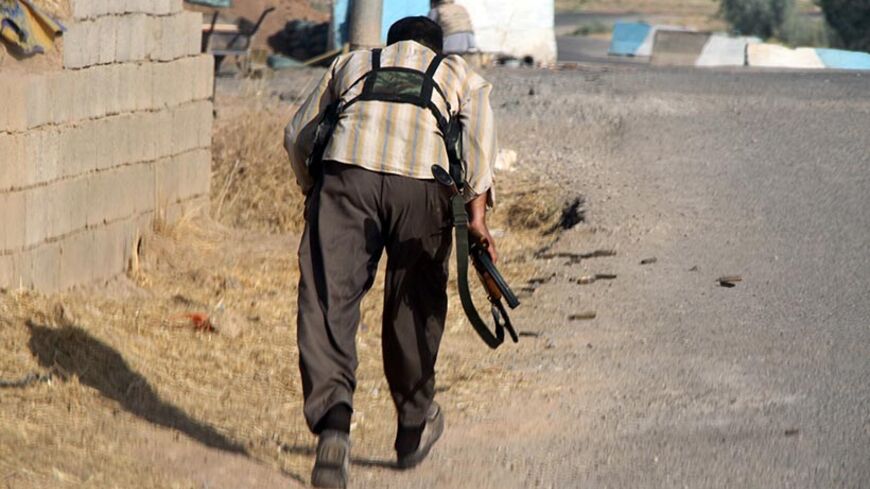 Each and every move in the Islamic State’s (IS) campaign in Iraq — before and after it proclaimed a caliphate and changed its name — has rendered the Turkmen issue a lost cause for Turkey. Since June, the Kurdish peshmerga forces have assumed the defense of Tuz Khormato, a Turkmen-majority town south of Kirkuk, while Tal Afar, to the west of Mosul, has fallen without a fight, with local Turkmens fleeing to Sinjar, only to find themselves defenseless again after IS’ subsequent capture of the town.

These developments have traumatized those who once believed that Turkey was the Turkmens' protector. The trauma has deepened further amid reports that Amerli, a town in Salahuddin province south of Tuz Khormato and home to the Bayat tribe, is next in line for an imminent massacre at the hands of IS. According to Turkmen sources, 17,000 to 19,000 people are trapped in the town. The Shiite and Sunni Turkmen villages surrounding Amerli were seized by IS six weeks ago. Since then the jihadists have shelled the town from all sides, condemning its people to death and hunger. The Amerli people have taken up arms to resist the assault, fearful that, even if they surrender, they will face death because of their Shiite identity.

“The Turkmen are in great trouble. They have been left alone against the IS terror, getting support from no one. The United States, too, is helping out only the Kurdish regions,” Turkmen journalist Casim Muharrem said by telephone.

A Turkmen academic, who spoke on condition of anonymity, said, “It is sad to see that the concern Turkey, the United States and the United Nations displayed righteously for the Yazidis in Sinjar is denied to the Turkmen.”

Speaking at a Turkmen demonstration at Baghdad’s Tahrir Square this week, former parliament member Fevzi Ekrem Terzi said the Turkmens in Amerli were struggling for survival in destitute conditions. Appealing to the international community, he added, “Those who showed care for Sinjar should see [the plight of] Amerli, too. The world hit [IS] in Sinjar, but why is the world not hitting [IS] now that it has besieged Amerli? The Arab world, the Vatican, the United Nations, where are you? I’m calling also on the Turkish world: Don’t abandon your Turkmen brothers!”

The United States has staged 93 air raids against IS to help out the peshmerga — including 60 strikes in the vicinity of the Mosul Dam — and dropped humanitarian aid to fleeing Yazidis stranded in the Sinjar Mountains. Iraqi army helicopters, too, have taken humanitarian supplies to the Yazidis and evacuated a number of children, women and elderly.

On Aug. 23, the UN special representative for Iraq, Nikolay Mladenov, raised the alarm on Amerli, urging “immediate action to prevent the possible massacre of its citizens.” Following the appeal, Washington reportedly began to review operational options while volunteer Shiite militias took action. In response to a call by Grand Ayatollah Ali al-Sistani, al-Salam Brigades, an armed group created by Shiite cleric Muqtada al-Sadr, and the Imam Ali Brigades deployed a force with some 2,000 vehicles near Amerli in preparation for an assault to break the siege.

The siege of Amerli has exposed a reality that is hardly uttered in Turkey and mostly passed over with reports that the Iraqi army is "bombing Sunni Turkmen settlements on the pretext of targeting IS positions." The reality is this: The rapid IS advance in Turkmen regions became possible because of the support the organization receives from Sunni Turkmens. Long before IS adopted its current name, the group already had a solid number of Sunni Turkmen recruits in the years it operated as an al-Qaeda affiliate. Shiite Turkmens claim the aid Turkey sent to Turkmen regions in previous years was exploited by people linked to al-Qaeda.

A closer look at the IS advance in Turkmen regions reveals the following sequence: Immediately after IS captured Mosul in June, the group turned to the Turkmen district of Tal Afar, penetrating Sunni areas first and then moving on to attack Shiite neighborhoods. The group took easily Avgenni, a 10,000-strong Sunni Turkmen town north of Tal Afar, as well as the villages of Sheikh Ibrahim, Muhallabiyah and Juma. Muhallabiyah, which is part of Mosul province and has a population of about 10,000, had already won a reputation as an al-Qaeda stronghold and even has a cemetery for "al-Qaeda martyrs."

With IS using bases in Sunni Turkmen areas to mount attacks on Shiite Turkmen settlements, the rift and the conflict in the Turkmen community deepened, though the issue was rarely addressed. Finally, 25 Turkmen villages around Tal Afar and about 30 others around Mosul fell to IS. The militants destroyed and burned down houses in Balilkligol village, taking revenge on its inhabitants, members of the Cholak tribe, who resisted al-Qaeda in previous years.

In remarks to Al-Monitor, a Turkmen source said, “Back in the days when IS had not yet emerged, bomb attacks began to target Shiite Turkmen in Tuz Khormato. We later found out that al-Qaeda militants, supported by Sunni Turkmen in Yengeja, were behind the attacks.”

No doubt, the local support for IS does not mean that all Sunni Turkmen side with the organization. But whatever the scale of support, IS' actions lead to one outcome: The Shiite Turkmen are virtually facing genocide, either being killed or expelled from the region.

There is another little-discussed aspect to the story: Tactics aimed at uprooting Shiites are also underway in Kirkuk, the oil-rich city where the Kurdish peshmerga assumed control as IS captured Mosul and the Iraqi army withdrew from the region. A Turkmen source from Kirkuk said, “The Shiites are being threatened. Notes are being left on the doors of Shiite homes, threatening residents to either leave the city or see their homes 'blown up.' The Shiites are terrified. The source of the threats is unclear. Are they the Baathists or IS? We don’t know.”