Iraqi Turkmen, wary of gains by both Iraqi Kurds and the Islamic State of Iraq and al-Sham (ISIS), have moved to create their own armed militia. 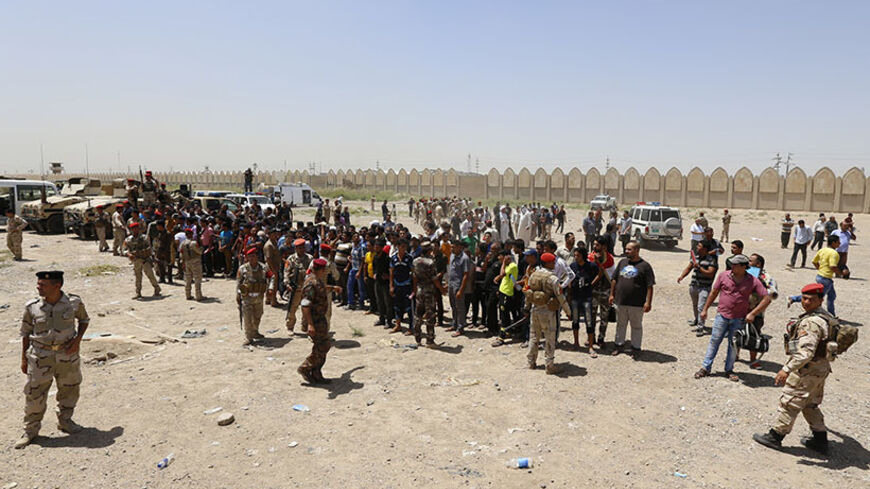 KIRKUK, Iraq — I was just about to press the shutter on my camera outside the Iraqi Turkmen Front’s (ITC) provincial office in Kirkuk, the nerve center of the Turkmen cause in the city, when a security guard holding an automatic rifle emerged from his nearby booth and entered the frame, posing like a hardened warrior under the scorching sun. I should have known that very moment that the Turkmens were taking up arms. Once inside the building, I listened to heated discussions about the future of Turkmeneli (Turkmen lands), driven by the argument that the creation of an armed militia was now inevitable. In a few days, ITC leader Arshad Salihi and his comrades would appear before the press, brandishing arms, and formally announce their decision to form such a force.

The “Sunni insurgency” against Prime Minister Nouri al-Maliki’s government, led by the Islamic State of Iraq and al-Sham (ISIS) along with opposition from Sunni tribes, Baathists and some Sufi groups, presented the Kurdistan Regional Government (KRG) with its long-awaited opportunity to take control of Kirkuk. Kurdish peshmerga took over bases and checkpoints abandoned by the Iraqi army in Kirkuk and assumed control of security in Tuz Khormato, whose Turkmen population is in the majority. The question the Turkmen are now trying to answer is how it is going to respond if the current control by peshmergas, justified for now by the need to provide security against the ISIS threat, becomes permanent? With the Zab River now a de facto border, a poster hanging on Governorate Avenue clearly presents the Kurdish position: “The peshmerga will provide security all over Kurdistan.”

Kirkuk's oil came to light in 1927, leading it to become the scene of a rivalry between Kurds, Turkmens and Arabs. The results of Iraq’s April 30 parliamentary elections in Kirkuk — Kurds won eight of the 13 seats — is a clear indication that the city’s political and demographic landscape has changed in line with KRG aspirations. The Kurds hope that an eventual referendum, envisaged in the constitution but so far deferred, will allow them to annex Kirkuk to Iraqi Kurdistan, while the Turkmens advocate a federal administration run jointly by Turkmens, Kurds and Arabs.

When I arrived at the ITC headquarters, a heavily guarded fortress not far from the ITC provincial office, the party leadership was in the middle of a meeting. A sense of abandonment has prevailed in the ITC after Turkey, opting for strategic ties with the KRG, advised the Turkmens to “act in unison with the Kurds.” The Turkmen community had until now refrained from establishing an armed defense force, relying on Turkey as its guarantor. The Turkmens now appear to have embraced the notion that since Turkey has done away with its red lines, leaving the Turkmens unprotected, they need to set up a militia force.

In remarks to Al-Monitor, the ITC's Salihi urged the Kurds to avoid attempting fait accomplis, but also stressed that Turkmens should have autonomous status in northern Iraq. “The peshmerga are today positioned around Kirkuk. And our people will stand up to any sort of civilian threat. Our people, too, will be arming themselves for their self-defense. No one can object to this, because all the other groups have their own militias. We are often in trouble for being unarmed. The central government’s arms go to our Shiite brothers. The Sunnis and the Kurds are already armed. We are absolutely determined to set up our own armed force. People have to defend themselves,” said Salihi.

“We are ready for any eventuality,” the ITC leader asserted, glancing at the pistol and Kalashnikov on top of his desk. He issued a warning to the Kurdish administration: “In abruptly developing situations, there is no army whatsoever, and the peshmerga are in charge. Once this story is over, a collective army should be built anew. In no way do we see Kirkuk as part of Kurdistan. Should they [the Kurds] resort to a fait accompli at our expense and make a transient situation permanent, this would cause serious disturbances to them as well in the future.”

Asked whether they had received adequate support from Turkey, Salihi replied, “Turkey should have stood closer to the Turkmens. It has stood at an equal distance to everybody, but we should have been better supported. Turkmens cannot exist a single day here without Turkey’s moral support.”

Despite his concerns, Salihi dismissed the risk of armed confrontation between Turkmens and Kurds in the future. “I don’t think this could happen. If the peshmerga make mistakes, this will cost them the gains and stability they have today. The Turkmens are a key factor. They [the Kurds] know how influential the Turkmen lobby is in Ankara,” he said.

Salihi voiced pessimism about Iraq’s prospects of overcoming its de facto breakup at present. “Iraq has virtually disintegrated. Putting the country back together seems difficult from now on. That’s the reason why we are concerned. We have jumped out of the frying pan into the fire. We are faced with a fait accompli. An autonomous Turkmen region will be the best solution for us. If there are Shiite, Sunni and Kurdish regions, the Turkmens, too, should have autonomy in their regions [Tal Afar, Tuz Khormato, Taza Khormato], along with a jointly administered Kirkuk.”

When ISIS captured Tal Afar on June 16, Salihi held a press conference to formally announce the decision to establish an armed militia. Flanked by armed Turkmens and wearing a flak jacket, he told reporters, “Turkmens, too, have the right to arm themselves for their self-defense. We are obliged to do that to protect our people and region.”

In Taza Khormato, a town 10 kilometers (6.2 miles) south of Kirkuk populated by Shiite Turkmen, some 1,500 armed men were already on guard against ISIS. Although the peshmerga were absent from Taza Khormato, Kurdistan’s forces were again on the frontline in the nearby Shiite Turkmen village of Bashir, fighting off ISIS attacks.

The Iraqi Turkmen community, which has both Sunni and Shiite adherents, has acted in unity on many issues, but this time they are divided, just as during the Sunni-Shiite conflict in 2007 that followed a bomb attack in Tuz Khormato. The Shiite Turkmens are siding with Iraqi government forces, while some of their Sunni brethren look favorably on the ISIS-led rebellion. According to local sources who spoke to Al-Monitor, the polarization has already erupted into confrontations in Tal Afar. Even more strikingly, while Sunni Turkmens feel resentment toward Turkey for allegedly having abandoned its red lines, Shiite Turkmens blame Ankara for the wave of revolt sweeping the Sunni areas.

In addition to the earful of criticism I heard on this issue, I was personally involved in a telling incident. Security forces on guard at a barricaded road outside Taza Khormato stopped me from entering the town. One of the men took my passport and asked about the purpose of my visit. I explained I was a journalist and wanted to speak to the people there. In response came the harsh reply, “What do you want to know? It is Turkey itself that put us into all this trouble.”

With the ISIS capture of Tal Afar, the Turkish government came under mounting pressure and faced opposition accusations of being indifferent to the Turkmens’ fate. Prime Minister Recep Tayyip Erdogan said the government was acting cautiously to prevent any harm to dozens of ISIS-held Turkish hostages. “Things have grown beyond the actions of ISIS elements, escalating virtually into sectarian strife and perhaps even a war,” Erdogan said.

The government has been acting as if it is left with few options in the name of keeping the hostages safe, while also obtaining a court order to ban media coverage of the issue. What it has managed to do so far is to make a decision to consider aid for Turkmens who fled Tal Afar for nearby settlements, including Sinjar and Duhok.