Relations with Maliki on edge as Jordan courts Iraq's Sunnis

Jordan does not expect Iraq's Nouri al-Maliki to survive as prime minister and is courting Iraq's Sunnis to prepare for a possible successor. 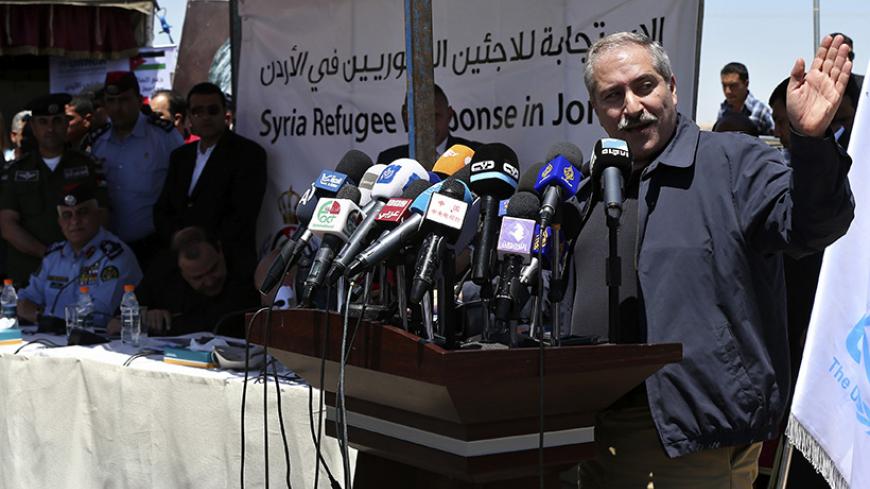 Relations between Iraq’s outgoing Prime Minister Nouri al-Maliki and Jordan have hit rock bottom following the convening of a conference in Amman on July 15 by Iraqi Sunni representatives and other opposition groups.

Baghdad recalled its ambassador in Amman “for consultations” two days later and Maliki criticized Jordan for sponsoring a meeting for “those who support sectarianism and terrorism” and called on the kingdom to “clarify its position on terrorism.” While Maliki insisted that he was looking to strengthen economic, political and security relations with the kingdom, Iraqi deputies belonging to Maliki’s coalition called on him to impose sanctions in retaliation for what they saw as a “hostile act” by an “ungrateful Jordan” against Iraq.

A member of Maliki’s State of Law Coalition, Saad al-Matlabi, said all options were on the table, “including severing ties and suspending bilateral agreements.” He claimed that the Amman conference was financed by Jordan’s royal court.

Jordanian Foreign Minister Nasser Joudeh told the country's official news agency that he had assured his Iraqi counterpart that the conference had nothing to do with the government. He said Jordan did not play a role in hosting the meeting or in drafting its final statement. But Baghdad asserted that many of those who attended were outlaws wanted by Iraqi authorities. An Iraqi military official, Qasem Ali, said his government would ask for the intervention of Interpol and demanded that Jordan hand over those “who had conspired against the democratic process.”

The controversial meeting, titled the “Provisional Conference of Iraq’s Revolutionaries,” was attended by about 300 Sunni clerics, tribal leaders, insurgent commanders, Baathists and businessmen, during which the attendees made calls to endorse the “legitimate revolt” against the government. In a final statement, they called for Maliki’s exit, while rejecting any plans for Iraq’s partition. But sources from the conference told Al-Monitor that the idea of Kurdish and Sunni independence was also discussed.

But not all Iraq’s Sunni groups supported the conference. A number of representatives of the Sunni insurgency in Iraq, such as Ali Hatem al-Suleiman and Najeh al-Mizan, were critical of the Amman meeting. They said the conference should have called for the creation of a Sunni enclave “to cut Iran’s red hands in Iraq.” Suleiman accused participants in the Amman meeting of having no say on the ground.

While the Jordanian government defended its stance and insisted that it had nothing to do with the conference, local analysts disputed this position. Political columnist Fahd al-Khitan wrote in Al Ghad daily that he was assured by participants of “an official Jordanian patronage” of the meeting. “Jordan would never have taken such a step if it had the slightest hope about Maliki’s ability to form a new government,” he wrote. According to him, the holding of the conference represents a major shift in policy toward Maliki, which, in spite of the potential economic and political damage, means that the Jordanian government is preparing itself for a new phase in Iraq.

Another political commentator, Bassam Badarin, told Al-Monitor that Jordan no longer trusts Maliki, since he failed to deliver on the many economic promises he had made to the kingdom. He added that, strategically, Jordan is worried by sectarian tensions in Iraq, especially Maliki’s onslaught against Iraq’s Sunnis in Anbar province, with whom Amman maintains a close relationship.

“Maliki’s policies now threaten Iraq’s integrity and have resulted in the emergence of a new regional threat in the form of ISIS [the Islamic State of Iraq and al-Sham] and the declaration of a Muslim caliph,” Badarin said. “Jordan cannot afford to sever ties with Iraq’s Sunnis.”

Head of the Foreign Relations Committee in the Lower House of Parliament Hazem Qashou told Al-Monitor that the conference “served to protect Jordan’s national interests.” He said, “Jordan responded to appeals to hold such a meeting, which serves to protect Jordan’s borders and opens channels of communications with one of the important components in Iraqi society.” He added that Jordan cannot sit idly by when its national security is being threatened by regional upheavals.

Prominent Jordanian economist Yusuf Mansour told Al-Monitor that he was against convening such a conference because of possible Iraqi retaliation. He said Jordan was suffering from an acute energy shortage and Iraq, until recently, was supplying the kingdom between 15,000 to 20,000 barrels daily of crude oil at preferential rates. The delivery of those shipments was suspended because of security problems in Iraq. Mansur said the current diplomatic crisis will put on hold the project to build an oil pipeline from Basra to Aqaba. He said Jordan’s Aqaba port will suffer, since it relies heavily on Iraq’s imports of foreign goods.

Trade between Jordan and Iraq is estimated at $2 billion annually, in Jordan’s favor. But the latest turmoil in Iraq has affected the flow of goods to Iraq, according to press reports.

One former minister, who spoke on condition of anonymity, said it was inconceivable that the government and the intelligence department had nothing to do with the conference. He said Jordan has realized that Maliki has no hope in forming a new government and that it must be ready to deal with his successor. He said Jordan was shocked when Iraqi government forces withdrew two months ago from the Karama border crossing without informing their Jordanian counterparts. The government had to work with “moderate” Sunni tribal leaders in Anbar to guarantee the safety of the border point and prevent the Islamic State from reaching it.

The head of Jordanian Prisoners in Iraq Committee, Mohammad Khalaf al-Hadid, told Al-Monitor that Maliki was never a friend of Jordan. “He is responsible for the execution of dozens of Jordanians in Iraq on a sectarian basis and his promises of economic aid to Jordan are empty,” he said.

According to government spokesman Mohammad al-Momani, there are over 250,000 Iraqis living in Jordan. So far, Jordan has ignored calls to extradite prominent Sunni figures, including Hareth al-Dari, Nasser al-Junabi, Bashar al-Faiydi and members of the defunct Baath Party. The kingdom has sponsored Iraqi opposition meetings before, including ones opposed to former President Saddam Hussein. Khitan wrote that many Iraqi officials today were political refugees in Jordan at one time.

The current showdown underlines Jordan’s concern over recent developments in Iraq while seeking to build bridges with Iraqi Sunnis, who are crucial and friendly players, at a time when Iran’s influence in Iraq is growing.