IS threat could push Jordan beyond its borders

Despite the imminent terrorist threat, some Jordanians reject the necessity to intervene in Syrian and Iraqi territory. 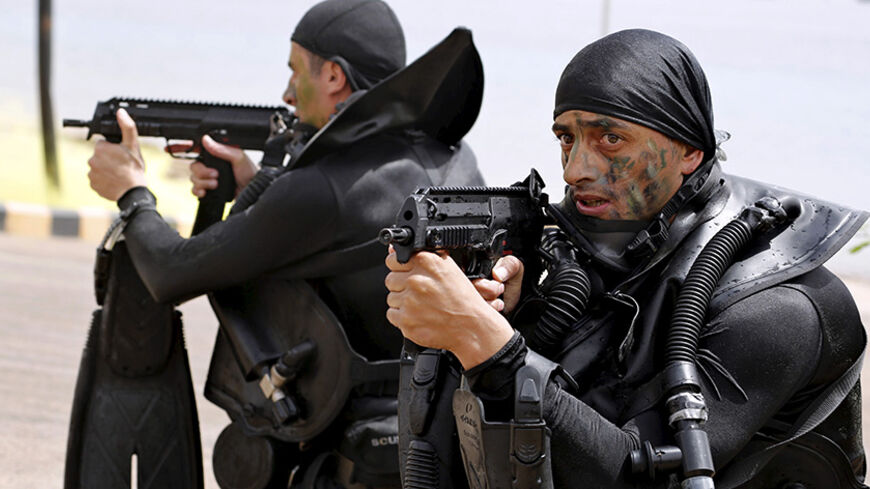 Jordanian soldiers participate with special operations forces from Pakistan, Jordan, France and the United States in a boarding drill during Exercise Eager Lion in the coastal city of Aqaba, May 18, 2015. - REUTERS/Muhammad Hamed

The controversy over Jordan’s future role and actions in southern Syria and western Iraq is yet to subside following renewed pledges on June 14 by King Abdullah that the kingdom will go ahead with plans to arm tribes in these regions in a bid to stop the expansion of Islamic State (IS) extremists and secure the country’s borders.

Speculation about a major shift in Jordan’s strategy toward its two war-torn neighbors became rife when the king presented the armed forces with a Hashemite flag during a solemn ceremony June 9, which observers said was highly symbolic and loaded with messages. The royal court said in a statement, “The Hashemite flag’s colors and motifs combine elements of history, legitimacy, religion and Arabism found in the Hashemite family and the Great Arab Revolt.”

In an attempt to explain the meaning of this move, Jordanian Armed Forces Chief of Staff Gen. Mashal al-Zaben told armed forces radio June 10, “The banner will not replace the official Jordanian flag and the ceremony is meant as a message to others that our patience has limits.” He added, “The army will fend off outlaws and terrorists and that its role is no longer limited to defense but will act as a deterrent.” It remained unclear what the new approach to external threats will look like.

But an article published June 14 by political commentator Maher Abu Tair in the daily Ad Dustour created an unexpected public uproar. He wrote that the “[historical] functional description of Jordan could be changing and that Amman could become the capital of a new Arab kingdom” expanding into parts of Iraq, Syria and the West Bank. He added, “Jordan, like other countries in the region, is threatened with sabotage and fragmentation … or it could declare itself as an incubator for Arab Sunnis. Either we expand under a new formula or cease to exist!”

Reactions to his article came from every side with local and Arab commentators, former government officials and foreign correspondents speculating about Jordan’s territorial expansion into parts of Syria and Iraq.

Former Minister Mohammad Dawodieh wrote in the daily Alarab Alyawm on June 21 that as Jordanians, “We will not accept any increase or decrease in our borders nor will we accept altering the country’s official title.”

In his June 19 column in Ad Dustour, political commentator Oraib al-Rantawi criticized “the absence of an official storyline” regarding the army’s ceremony and its meanings. He rebutted arguments about the possibility of a birth of a “greater Jordan,” adding, “It is naive to believe that Iraqis, Syrians and Palestinians will give up on their national identity.” He then asked, “What about the position of Jordanians, whether Jordanians of Palestinian origin or East Bank Jordanians? Will they accept becoming a minority in their own country?” Rantawi concluded that such a plan, if it exists, “will raise challenges to national identity, which remains a controversial matter in Jordan.”

Abu Tair told Al-Monitor his piece was based on information rather than analysis. He remained convinced that in light of growing challenges by IS in Iraq and Syria, Jordan has no option but to intervene.

On June 19, Agence France-Presse reported from Damascus that representatives of some of Syria’s leading pro-government tribes rejected support from Abdullah against IS, accusing him of backing “terrorists.” Syria has repeatedly accused Jordan of training and arming opposition groups that are fighting the Damascus regime. But on June 26, a number of Syrian tribes issued a declaration welcoming the king’s pledge to train and arm members of the tribes, in light of the latest advances by IS militants in Syria. A spokesman for the tribes, Sheikh Mahmoud al-Jibn, said that tribal chiefs plan to meet in Amman after the end of Ramadan in mid-July to back the initiative.

Abu Tair said, “It will be interesting to see how Jordan will react if the tribal chiefs issue a direct call for the army to intervene in their areas.” On May 1, Iraqi Vice President Osama al-Nujaifi said Jordan has agreed to arm Iraqi tribes in Anbar province to defend areas against IS militants.

It took the government more than 10 days to react to speculations about the kingdom’s possible expansion. Government spokesman Mohammad al-Momani said June 24 that Jordan has no plans “whatsoever” to expand beyond its borders, rejecting as baseless any reports or speculation that suggest the opposite. “Jordan respects other countries' sovereignty. … In fact, we help these countries regain their stability and security,” he said in a news conference.

But political commentator Fahd al-Khitan said Jordan’s strategic approach to conflicts in neighboring countries could be changing. He told Al-Monitor, “The role of the security and military organs will increase as we face long-term threats.” He added, “We are still at a stage where we have not moved from defense to deterrence, but there are signs that our position could be changing soon.”

Khitan further stated, “Our priority should be to keep the chaos from moving across the border, but any ambitions outside our territory will endanger the kingdom.”

Lower House Deputy Jamil al-Nimri said, “Backing Sunni tribes in Iraq and Syria is a must if we are to defeat sectarianism and lawlessness and create a moderate national power.” He told Al-Monitor, “Any talk about territorial expansion and regional ambitions [for Jordan] reflect sickly delusions.” As to calls to protect Syria’s Druze minority in Suwayda province, Nimri said, “Their presence along our northeastern borders is part of our strategic depth, and we should do everything to protect them without getting into direct contact with IS militants.”

Political analyst Labib Kamhawi was critical of any Jordanian role outside its borders. He told Al-Monitor, “Jordan is being pressured to become an incubator to absorb the outcome of partitions [in Iraq and Syria], which serves Israeli and American interests.” He added, “What is happening in the region is extremely dangerous, and Jordan should not be part of attempts to partition both countries so that Sunni tribes can become part of Jordan along a federal setup.” He said, “Fattening Jordan will not serve the cause of Arab nationalism.” He warned of Israeli plans to create “a Druze belt” in the Golan Heights leading to a Druze state that would play a similar role to Jordan's, in other words, a buffer zone between Israel and the rest of the Arab world.

Jordanians remain divided over a possible new role for Jordan in Syria and Iraq. Most recognize the rising threat of IS and other Islamist groups such as Jabhat al-Nusra so close to their borders. But few believe a greater Jordan is the answer to such threats. As Khitan said, “Jordan should be wary of attempts to lure it into a military and political trap outside its borders.”