The fall of Sheikh Miskin near the Jordanian border has sounded alarms in the kingdom, which is working to beef up security on the border and bracing for a new wave of refugees. 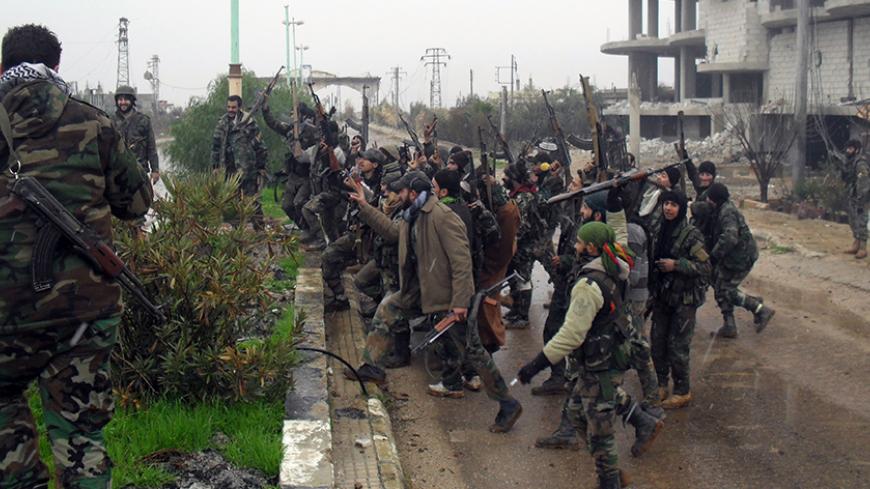 Syrian pro-government forces celebrate on a street in the town of Sheikh Miskin after they retook the strategic town from rebel forces, Jan. 26, 2016. - STRINGER/AFP/Getty Images

Jordan is carefully watching the military developments in the southern Syrian province of Daraa following the recapture of the strategic town of Sheikh Miskin on Jan. 26 by government forces in a Russian-backed offensive that began at the end of December.

The fall of the town, not far from the Jordanian border, was preceded by the retaking of the Brigade 82 military base from the Free Syrian Army and its allies, which include Jabhat al-Nusra. The loss is a major setback for the so-called Southern Front, which has been trying to kick the Syrian regime's forces out of the city of Daraa and other towns in the province’s countryside.

The fall of Sheikh Miskin will cut supply routes to the rebels and enable government forces, backed by Hezbollah fighters and the Iranian Revolutionary Guard Corps, to control the main highway linking Damascus in the south to Quneitra in the Golan Heights.

Jordan maintains close links with the FSA and the command of the Southern Front, which controls the Nasib border crossing on the Syrian side. Al-Monitor tried to contact Southern Front spokesman Issam al-Rayyes in Amman for his reaction to the latest events, but received no response.

Since the Russian intervention in Syria started at the end of September, the regime forces have been making important gains in the north and south of the country. Advances in Daraa province have sent tens of thousands of refugees fleeing, and many will be heading toward Jordan.

In addition to benefiting from Russian air support, regime forces were reportedly able to break through rebel defenses because of infighting among opposition groups such as the FSA and Jabhat al-Nusra in southern Syria.

For Jordan — which views stability in southern Syria as an important component of its national security — the shift in the military balance north of its borders raises many red flags. While it was never publicly confirmed, Jordan and Russia reportedly reached an understanding in October to ensure Russian bombing in southern Syria does not target the Southern Front. That understanding was apparently reiterated during a meeting between King Abdullah II and President Vladimir Putin in Moscow on Nov. 24.

Now Jordan believes that Russia has violated that understanding. On condition of anonymity, a Jordanian official told UAE-based website 24.ae on Feb. 3 that Russia has broken a cease-fire agreement in southern Syria by providing air cover for the attack on Sheikh Miskin.

Jordanian concerns were presented to the Russians during a surprise visit by Chairman of the Joint Chiefs of Staff Gen. Mashal al-Zaben to Moscow on Jan. 28, but there were no signs that the two sides had agreed on steps to reduce tensions in southern Syria.

Zaben’s visit coincided with the presence of Syria’s Defense Minister Fahed Jassem al-Freij in Moscow, but there were no reports that the two men had met. Syrian officials repeated in earlier statements that “Daraa terror is a Jordanian problem,” in reference to accusations that Jordan was backing what Damascus views as terrorist groups.

Jordan is particularly worried about the possibility of Hezbollah and IRGC fighters deploying close to Jordan's borders. In addition, it is bracing itself to deal with a new wave of Syrian refugees. Jordan is already home to over 1.3 million Syrians and has asked the international community for immediate help in covering the cost of hosting them.

A Russian diplomat in Amman who asked not to be named told Al-Monitor that Moscow will continue to back government forces in southern Syria until they gain control of all border crossings with Jordan. Syrian Foreign Minister Walid Moallem said during a Feb. 6 press conference in Damascus that a cease-fire will not be achieved until Syria's borders with Jordan and Turkey are secured.

Jordan’s military has stepped up security on its borders with Syria. It has foiled a number of attempts to illegally cross from Syria to Jordan, mostly by smugglers. But the change in the military balance in southern Syria raises questions about the ability of Jordan and its regional and Western allies to back the FSA, especially in providing it with arms.

Jordan also fears that the Syrian regime forces’ advance in southern Syria will drive rebel fighters, including members of Jabhat al-Nusra, to flee toward Jordanian territory. But Mohammad al-Alawneh, a retired general, told Al-Monitor that in spite of recent reverses on Syria’s southern front, Jordan and Russia continue to maintain close coordination.

The two countries agreed in October to set up a “special working mechanism” based in Amman following Russia’s military intervention in Syria. The objective was to coordinate military operations, especially in southern Syria.

“Jordan will step up its security measures to prevent violation of its borders, but it will also seek to create a buffer zone inside Syria to contain the flow of refugees,” said Alawneh. He added that Jordan has informed Russia of its rejection of any Iranian or Hezbollah presence close to its borders. “Such a presence will force Jordan to change its current policy toward Russia’s involvement in Syria,” he added.

But political analyst Fahd al-Khitan disagreed. He told Al-Monitor that the fall of Sheikh Miskin has shocked Jordan, especially as both Amman and Moscow “had a solid understanding over keeping southern Syria out of the military calculations of the regime in Damascus.” He went on, “Jordan is worried about Hezbollah and Iran’s presence in southern Syria and a new wave of refugees, which Jordan can’t afford to receive. More than that, Jordan is concerned about the reaction of terrorist groups, and while Amman has no problem with regime forces moving forward in Daraa, this has angered opposition groups, including the FSA, that have close ties to Jordan and the US.”

Jordan has not reacted publicly to the latest military developments in southern Syria. But it is certain that it has expressed its concerns to the Russians while tightening security along its northern borders. As regime forces make important gains in the north and south of Syria, Amman will be forced to review what Khitan called a policy of “positive neutrality” toward the Syrian regime, along with its controversial ties with the Syrian opposition. There also are indications that Washington, too, is altering its policy on Syria by abandoning the so-called moderate opposition.