Jordan is concerned airstrikes alone will not defeat the Islamic State threat, and is considering arming Sunni tribes in Iraq and Syria to prevent the jihadists from reaching its borders. 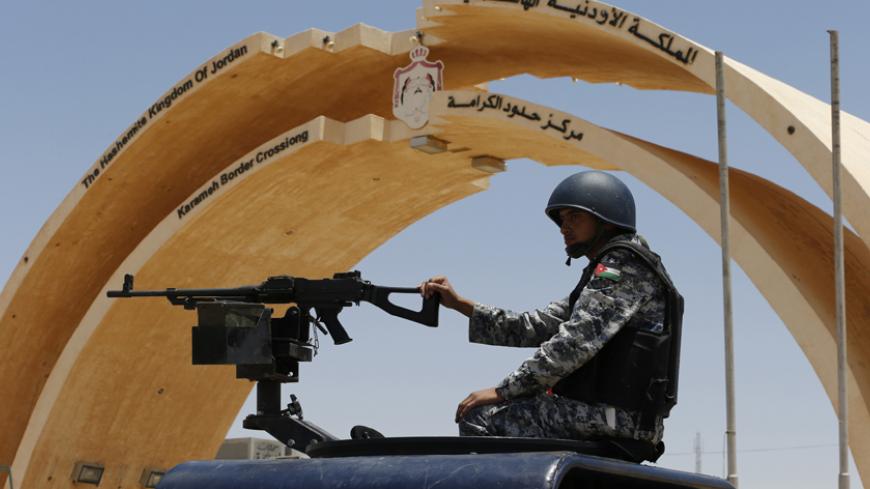 A member of the Jordanian Bedouin force stands guard at the Karameh border crossing on the Jordanian-Iraqi border near Ruweished city, June 25, 2014. - REUTERS/Muhammad Hamed

Jordan has adopted a new strategy in the fight against the Islamic State (IS) aimed at defending the kingdom against possible incursions by the militant group from western Iraq and eastern and southern Syria. On two separate occasions, King Abdullah declared that Jordan will do its best to support tribes in Syria and Iraq “that are engaging terrorist groups in both countries.” The king told the heads of southern Jordanian tribes on Dec. 18 that Jordan is implementing “a security strategy to confront challenges [on fronts with Syria and Iraq] in accordance with programs that are being followed by the armed forces and the security bodies.” He added that the Jordanian armed forces will not hesitate to carry out their duty toward “Arab neighbors and brethren.”

On Dec. 20, Abdullah reiterated his position to former prime ministers underlining Jordan’s ability to deal with regional challenges and stressing the importance of building an Arab-Islamic coalition against terrorism. He said that the war against the terror groups is an Arab and Islamic affair, “because the groups with extremist ideologies will not stop at Syria and Iraq if they gained more power, but will work to extend their grip to other Arab and Islamist countries, and worldwide.”

Jordan is an active member of the US-led coalition that is carrying out airstrikes against IS positions in both Syria and Iraq. But the new strategy of extending support to mainly Sunni tribes in both countries underlines the kingdom’s concern over the ability of airstrikes alone to stop the advance of militants closer to Jordanian borders.

In Iraq, Jordan is worried that IS militants may take over Anbar province, which borders Jordan. In recent weeks, the jihadists have made gains there and, according to Iraqi officials, they now control more than 80% of that province. The Iraqi government is yet to approve plans and pass legislation to form the so-called National Guard, a mainly Sunni force comprised of tribal members, to assist the Iraqi army in confronting IS militants.

Iraqi Prime Minister Haider al-Abadi visited Jordan on Oct. 26 to convince Sunni tribal heads to return from exile and assist in the building of the National Guard to defend their provinces. He had promised to reverse the policies of his predecessor, Nouri al-Maliki, which were seen by Iraq’s Sunnis as hostile to them, and strengthen security cooperation with Jordan.

Abadi reiterated that his government is seeking to establish strategic relations with Jordan when his Jordanian counterpart, Prime Minister Abdullah Ensour, visited Baghdad on Dec. 17. Ensour said that Jordan had already trained 64,000 Iraqi policemen and was ready to do more. On Dec. 23, Iraq’s Defense Minister Khaled al-Obeidi visited Amman and announced that Jordan will train members of the Iraqi army in the kingdom and that the first batch will arrive soon.

But observers believe that Jordan cannot afford to wait for Baghdad to fulfill its promise to train Sunni tribes. Political squabbling and resistance from Iran have so far impeded plans to start training Anbar Sunnis. The Jordanian strategy calls for bypassing obstacles and initiate the training and arming of tribes in both Syria and Iraq as soon as possible.

The logic behind that is that these tribes will form a first line of defense for Jordan and will play a crucial role in stopping the advance of IS militants closer to the Jordanian borders.

In Syria, the Jordanian government plans to arm tribes in southern and eastern provinces to thwart plans by IS to expel rebels fighting under the banner of the Free Syrian Army (FSA), who are in control of most areas in the south along the border with Jordan.

However, details of this new strategy are scarce. Political analyst Ureib al-Rintawi told Al-Monitor he has information that IS militants are mobilizing to move into the mainly Druze governorate of as-Suwayda, Daraa and even Quneitra on the border with Israel. He said such a scenario worries Jordan and should raise red flags in the international coalition and in Israel.

On the other hand, political columnist Basem al-Tuwaisi said that the Jordanian strategy remains vague since it is not clear how the kingdom will execute it. He told Al-Monitor that more information is needed on whether the Jordanian move will be part of “a regional security coordination that involves the United States or other Arab countries.” He added that Iraq’s Sunni tribes remain skeptical of calls to form a National Guard for fear that it would lead to a repetition of the Awakenings experience of 2006-09. He warned that some major tribes are demanding preconditions such as the formation of a Sunni enclave within the Iraqi state, the withdrawal of Shiite militias and ending Iranian interference in internal Iraqi affairs.

For now, Jordan is hoping to use its historical ties with Sunni tribes in Iraq and Syria to launch its new strategy, but some observers believe that such a strategy may backfire once IS militants are defeated. The armed tribes may find themselves sucked into sectarian confrontations that will accelerate the partition of Iraq and Syria, one former government minister, who did not want to be named, told Al-Monitor.

But former Minister of Information Samih al-Maaitah said that arming the Sunni tribes is the only alternative to a ground campaign that no one is enthusiastic about. “The Jordanian strategy should receive the backing of all those who want to stop the militants and defeat them,” he told Al-Monitor. “Only they can stand against IS and other extremists.”

But the crash of a Jordanian F-16 on Dec. 24 over Raqqa in Syria and the capture of its pilot by IS militants has dampened public opinion about Jordan’s role in the fight against extremists. Since that incident, Jordanian officials have avoided talk about taking the war to IS positions amid growing vocal opposition from deputies, Islamists and retired officers about Jordan’s involvement in military operations outside its borders. For now, the country is focused on the fate of the Jordanian pilot — the outcome of which may reset the security agenda once more.