Abadi’s visit to Jordan focuses on fate of Anbar

During his first visit to an Arab capital, Iraqi Prime Minister Haider al-Abadi discussed with officials in Amman the possibility of forming a Sunni tribal force to thwart the actions of the Islamic State in the Anbar province. 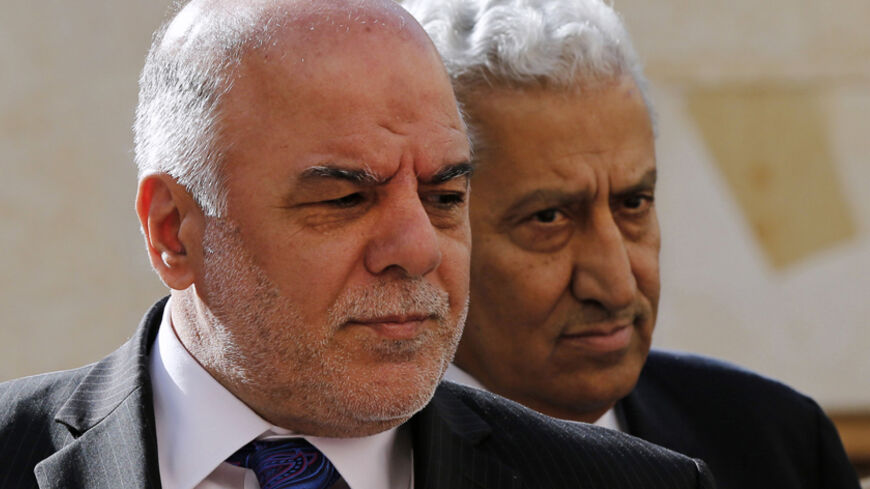 Iraqi Prime Minister Haider al-Abadi on Oct. 26 visited Amman, an event seen by local observers as a major step toward normalizing Jordanian-Iraqi ties after months of tension. Abadi made Amman his first Arab destination since he took office on Sept. 8, replacing Nouri al-Maliki who had governed Iraq for eight tumultuous years. Abadi met Jordan's King Abdullah who assured his visitor of Jordan’s concern over Iraq’s unity, security and stability. He also underlined the need to involve all Iraqis in building the country’s future. The king reiterated Jordan’s commitment to standing by Iraq in the face of various challenges, while Abadi said Jordan remains Iraq’s closest neighbor.

But beyond public statements, Abadi’s visit came at a time when both countries are facing mutual threats. Jordan has joined the international coalition to fight the Islamic State (IS) in Iraq and Syria, and its air force has carried out an unspecified number of airstrikes against targets in both countries. But for Amman and Baghdad, recent gains by IS fighters in Anbar province constitute a major threat to both. With world attention focused on the battle for the Kurdish Syrian border town of Kobani, IS has managed to claim most of Anbar including the highway linking Amman to Baghdad.

Abadi came to Amman to discuss Jordan’s role in thwarting IS in the mostly Sunni province of Anbar, Jordan’s land gateway to Iraq. Since the fall of most of the province into IS hands, trade between the two countries dropped considerably. Historically, Amman has maintained good relations with the province’s tribal heads and played a pivotal role in supporting the so-called Awakening movement (2006-09) that succeeded in evicting al-Qaeda militants from Anbar. Jordan provided logistical and intelligence backing, which eventually helped the United States hunt down and kill Abu Musab Zarqawi, a Jordanian jihadist whose organization later became the precursor of the Islamic State of Iraq and al-Sham, now IS.

Abadi, who promised to reverse his predecessor’s policies of excluding Iraq’s Sunnis from the political process and end sectarian tensions, wanted to get Jordan’s support in convincing key Anbar tribal heads — many of whom are in exile in Amman and Erbil — to form a 30,000 strong volunteer force to fight IS. Most of these tribal heads fled after Maliki sent his army earlier this year to quash a Sunni uprising in Anbar that was calling on the Baghdad government to abandon its sectarian policies. Others left the province after IS fighters took major cities and towns, including most of Fallujah and Ramadi.

Relations between Amman and Baghdad worsened this year when Jordan allowed Iraqi Sunnis to hold a major conference on July 15 that called for Maliki’s exit. Abadi is now trying to open a new chapter by wooing Sunni tribes in Anbar to help in the fight against IS. After meeting key representatives in Amman, Abadi offered to train and arm the new volunteer force. It is not clear yet if Jordan will play a role in training the volunteers, but observers point to the fact that Amman had trained members of the new Iraqi army in the past. One government source told Al-Arab Al-Youm daily that Jordan has agreed to train Iraqi tribes in Anbar and to exchange intelligence information in a bid to stop IS infiltration into the province.

But Abadi’s efforts to lure the Anbar Sunnis are facing challenges. After the fall of Mosul to IS in June, Iraq’s Shiite spiritual leader Ali al-Sistani called on his followers to form militias to defend holy places. With the Iraqi army in disarray, most of the fighting against IS near Baghdad and in the north is being carried out by Shiite volunteers. There have been reports that these forces are responsible for atrocities against Sunni residents whom they accuse of aiding IS militants. The formation of a Sunni volunteer force in Anbar may pave the way for future confrontations between Sunni and Shiite militias on sectarian grounds.

Moreover, Iraq’s Sunnis are shocked that the Iraqi army had deserted a main tribe in Anbar, the Albu Nimr, which had stood against IS. Since last week, hundreds of tribe members, including women and children, have been abducted and executed by IS. Their appeal for help from the United States or the Baghdad government was unanswered. The targeting of this tribe at such large scale is a warning by IS to other Anbar Sunnis not to join government forces.

But the fall of Anbar to IS will be a huge setback to the United States and the international coalition. On Oct. 30, both US Secretary of Defense Chuck Hagel and Chairman of the Joint Chiefs of Staff Gen. Martin Dempsey announced in a joint press conference that the US administration was looking at ways to engage the Sunni Muslims in Iraq and empower them in their fight against IS. “We need to expand the train-advise-and-assist mission into the Anbar province. But the precondition for that is that the government of Iraq is willing to arm the tribes,” Dempsey said.

Abadi has yet to deliver on his promise to arm the Sunnis of Anbar. Sistani called on him on Oct. 31 to rush to the aid of the beleaguered province. Defense Minister Khaled al-Obeidi promised that Anbar province will be liberated within a month. Jordan will be watching developments in this key border region, and a government source told Al-Monitor that Amman is considering all options, “including the worst-case scenario.”

Strategic analyst Mousa Ishtaiwi told Al-Monitor that unless the ground rules of the political process change in Iraq, the country faces one of three options: partition, federal rule or a long civil war. “What is happening in Anbar will determine where that country is heading,” he said.