What's next for Abadi? 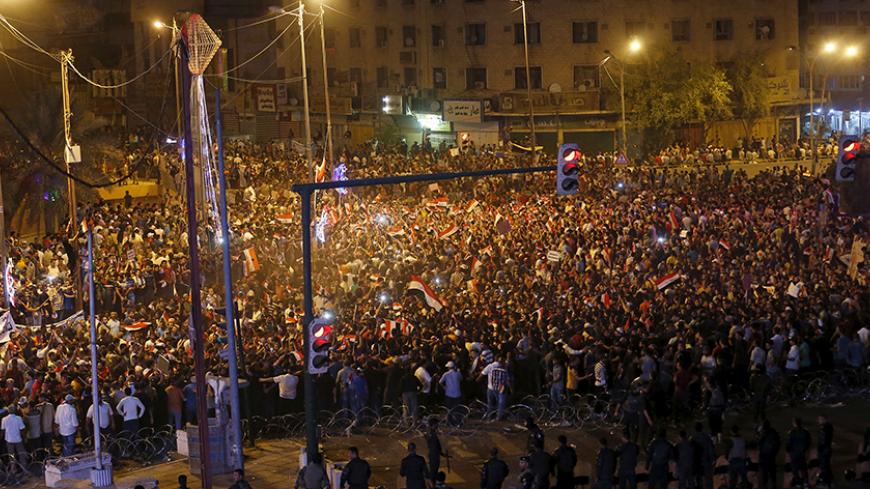 Riot policemen stand in front of protesters during a demonstration against the poor quality of basic services and power outages and calling for trials of corrupt politicians in Baghdad, Aug. 28, 2015. - REUTERS/Thaier al-Sudani

It is no secret that the internal and regional disputes that dashed former Iraqi Prime Minister Nouri al-Maliki’s hopes of serving a third term eventually led to a fragile agreement on forming the new government, ultimately established by Haider al-Abadi, in September 2014. Although Prime Minister Abadi has exerted great effort to maintain a balance between factions and keep the country from falling prey to confrontations between rival camps, the extent of the polarization he continues to face is making his task difficult.

Abadi adopted a middle-ground approach to the US-Iranian competition over influence in Iraq in order ultimately to preserve Iraq’s own interests. Abadi visited both countries within a relatively short period after taking office, heading to the United States on April 13 and to Tehran on June 17 on his second visit to Iran. Abadi also refused to take sides in the ongoing disputes between the Kurdistan Regional Government (KRG) in Erbil and the unity government he heads in Baghdad and between the KRG and the political parties currently holding power. This has spared the country the type of public and intense conflicts that flared up under previous governments.

In the fight against the Islamic State (IS), Abadi has managed to maintain some kind of balance in roles for the volunteer Popular Mobilization Units, the Iraqi armed forces and the international coalition. The positive outcome of this balance was manifested in the liberation of Tikrit on March 31. Abadi was able, through negotiations, to distribute roles among the different parties and thus avoid wholesale withdrawals by some of them in protest of the particulars of the others’ involvement.

When demonstrations began flaring up across the country in recent months, Abadi was caught between the hammer and the anvil. The populist protests against corruption and lack of services were strongly backed by the religious authority in Najaf. Grand Ayatollah Ali al-Sistani had issued a statement back in February 2011 in which he declared his support for popular demands. Sistani also pushed for Abadi to implement quick and radical economic, political and administrative reforms irrespective of political party apportionment or representation. On the other hand, Abadi had to deal with those sharing power and the backing they enjoyed from Iran.

Despite the potential difficulties, Abadi held fast to his moderate approach. Within the scope of his first reform package, authorized in early August, he eliminated the positions of three vice presidents and three deputy prime ministers, filled by representatives from different political parties. With this, he managed to ward off conflicts based on political loyalties. In implementing the reforms, Abadi did not put forward a demand that could be deemed biased by a specific party.

Abadi hopes to avoid confrontations among the different political parties and to make them feel that they are all involved in the reforms and that all will make compromises. While his moderate approach has prevented any significant problems in the already fragile foundation of Iraqi politics, his tactics have fallen short of addressing the current challenges, failing to respond to the people’s broader demands and the expectations of the religious authority.

Abadi continues to face a major challenge in that those who share power in Iraq — namely, the Dawa Party, the State of Law Coalition and the National Iraqi Alliance — have not allowed him to take bigger steps in terms of reform. This prompted Sistani, in an Aug. 21 Agence France-Presse interview, to warn of the risk of the “division of Iraq,” unless “real reforms” are implemented. These comments, follow Abadi's announcement of reform packages, suggest that Sistani remains unconvinced of the path, size and impact of the reforms proposed.

From the perspectives of the political parties, public opinion and the religious authority, Abadi's reforms do not extend beyond the level of minor modifications and have not brought any real change to the political or governing system. Nonetheless, the parties in government have expressed assorted reservations. Those in the Kurdistan region fear compromising the KRG’s financial entitlements and its participation in the government through the ministries. The Shiite- and Sunni-based parties similarly fear losing clout in the government.

What options then remain available to Abadi? The first option, raised in some protest slogans, is for Abadi to resign from his political bloc and create an independent bloc supportive of his reform project. This would allow him to proceed with more drastic changes without falling into the trap of partisan, self-interest-based conflicts. This option seems unrealistic, however, in light of the current distribution of power and political interests among the parties. It is not easy to bring about qualitative change in the existing political structure under the current circumstances, except in the event of early elections resulting in a new parliament and a new distribution of power. This, however, is impossible in light of IS’ current control of most Sunni provinces.

An option being advocated in certain political circles calls for stalling the implementation of reforms in an attempt to gradually tame discontent in the street so that Abadi can continue leading in the country's albeit precarious situation while maintaining a balance among the political parties. This possibility obviously does not address the issues that prompted Sistani to warn of division and collapse, especially given that the protests have irreversibly altered the way political work is done in Iraq.

What the Iraqi street is asking of Abadi is to make radical changes that involve dismissing some figures and eliminating positions. He still, however, needs to put forth a strategic and clear road map of how he plans to provide services, empower state institutions and uproot corruption. The support of the protesters and the religious authority is dependent on tangible change. The failure on Abadi’s part to yield results will only intensify the public’s indignation and further irritate Sistani.