Grand Ayatollah Ali al-Sistani's welcoming of the Iraqi president and prime minister is not a sign that he is backtracking on steering clear of politics, but that he wants the political arena to succeed in implementing reforms, thereby protecting Iraq's religious and cultural diversity. 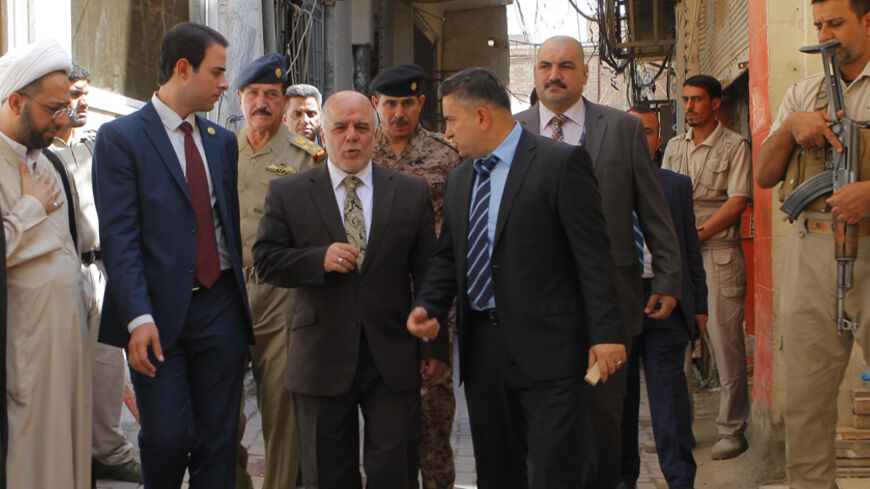 A turning point was reached the moment Grand Ayatollah Ali al-Sistani, the supreme religious authority in Iraq, opened the doors of his office in Najaf to Prime Minister Haider al-Abadi on Oct. 20, and then to President Fouad Massoum on Nov. 11. For years, Sistani had refused to meet with politicians, rejecting every attempt to drag him into the political arena or to use his position for their climb to power. Thus, the symbolic significance of the moment is more important than the two recent meetings themselves.

Sistani’s welcoming of the politicians has naturally raised questions involving his resuming these types of meetings, which could reinterpret the role of the religious authority in political life in the future. Some essential questions have yet to be asked, however: Why did Sistani boycott politicians? Is Sistani dealing with the politicians from a political perspective to mitigate power and expand his influence? Is his stance a religious one, in particular, seeking to protect Najaf from Shiite politicians’ grasp? Was his welcoming of Abadi a political or a religious signal?

Concerning Sistani’s previous position of boycotting politicians, there is a fine line between intervention of the religious authority in politics and isolation from it. This is why Sistani insisted on forgoing a political position or interfering in politics. It would not be in line with the democratic path. At the same time, he has been protecting the country's democratic and civil framework through his social authority. This policy sustains the independence of both the state authority and the religious authority within a cooperative and constructive context.

The independence of the religious authority is a concept that Sistani strongly defends. Even when he opposed a third term for former Prime Minister Nouri al-Maliki, he tried not to overstep this principle. Instead, he supported the independence of the state from the religious authority and expressed his discontent through indirect messages. For instance, he continued not to host politicians, and let his spokesmen, including Sheikh Karablai and Sayyid Ahmad al-Safi, deliver statements during Friday prayers in Karbala.

Sistani welcomed Massoum and Abadi to reaffirm his previous positions, which also clarify what led him to previously boycott politics and reveals why he supported the political shift that brought Abadi to power rather than Maliki. Sistani’s stance toward the Abadi government, his open messages of support in achieving change, fixing past mistakes and implementing reform should not be viewed as unconditional. The religious authority’s support is bound by the government’s ability to keep its promises to the Iraqi people. Sistani has vowed to support the reformist trend of the new government as long as it makes progress. Any slackening or failure by Abadi to follow through with reforms, and Sistani will change his position, turning his support to criticism.

Sistani’s conditions for backing Abadi’s government are not a secret. They are unrelated to the religious authority and the Shiites' role in it. Rather, they are about the ability of Abadi’s government to bring about social consensus, open itself to others in the country and abroad and fix the imbalance stemming from state corruption and past bad leadership.

These conditions of the Shiite authority are no different from those of the Sunnis, Kurds and the international community. They are all part of a general framework that can be summarized in two words — civil state. This state should be built on a sense of citizenship and equal opportunity for all Iraqis, creating a general consensus to protect the country from terrorist and other threats and implementing political, economic and administrative reforms that will contribute to the country’s welfare and prosperity.

Sistani’s concept of the civil state was met with significant controversy, as it was not an attempt to reduce religious radicalism, and it did not support one sect over another. It was, rather, based on a deep faith that religion cannot be practiced freely and securely amid political conflict and in the absence of a civil framework for a state that allows it to protect religious diversity and foster pluralism.

Sistani has always believed in protecting religious, confessional and cultural diversity. In addition, he believes in defending the right to be different as a means of interaction and coming to agreement rather than settling for separation, in Iraq and the region.

Sistani’s vision in this regard essentially stems from the delicate relationship between religion and politics. He views politics as a regulatory structure for the state. In this capacity, it should protect society’s cultural diversity and aim to provide a suitable environment for freedom of religious choice as a condition for social peace and as a way to experience its spiritual dimensions, away from politics.

Iraq is the beating heart and engine of the Shiite currents at the religious, social and symbolic levels, because the sect's religious authorities, sanctuaries and prominent mosques are located there. The Najaf authority is the Shiites' core spiritual inspiration, regardless of the other authorities around the world.

Sistani sees the Iraqi experience in coexistence as an inspiring one for Shiites of the world and as an example for the region’s countries to follow. He is trying to make it a civil experience that guarantees Islamic consensus while protecting ethnic, cultural and sectarian diversity. This is the type of message that he wants Shiites around the world to spread and follow.

In a meeting with a delegation from the Gulf in July 2014, Sistani criticized the results of the Arab Spring. He was not against the people’s freedom of expression and quest for their legitimate rights, but he did object to the contribution of social movements in sparking strife and to bloody practices that do not fulfill the supreme, democratic objective that he favors. This objective supports harmony, understanding and integration among the different Islamic schools and sects.

Sistani’s culture of peace is not necessarily truce oriented. The Shiite authority, throughout its history, has rejected social injustice and supported the people’s desire to obtain their rights. It has continued to do so in Iraq, even after 2003, when Shiite leaders gained power.

The political slogan "Shiites are ruling Iraq" was enough to shift the religious authority’s policy through its speeches, messages and stances, from boycotting politicians to openly supporting the people. The identity of the Shiite ruler, and the regime’s assertions that it was defending Shiites were not enough to convince the religious authority to ignore its values backing all the people’s rights first and foremost. Iraq’s future, according to Sistani, is based on protecting intellectual, cultural and religious diversity in the country within the framework of good governance that does not favor one sect over the other, even if Shiites rule.