The office of Grand Ayatollah Ali al-Sistani has denied allegations that he supports the Iranian commander Qasem Soleimani's presence and Iranian involvement in Iraq in the fight against the Islamic State. 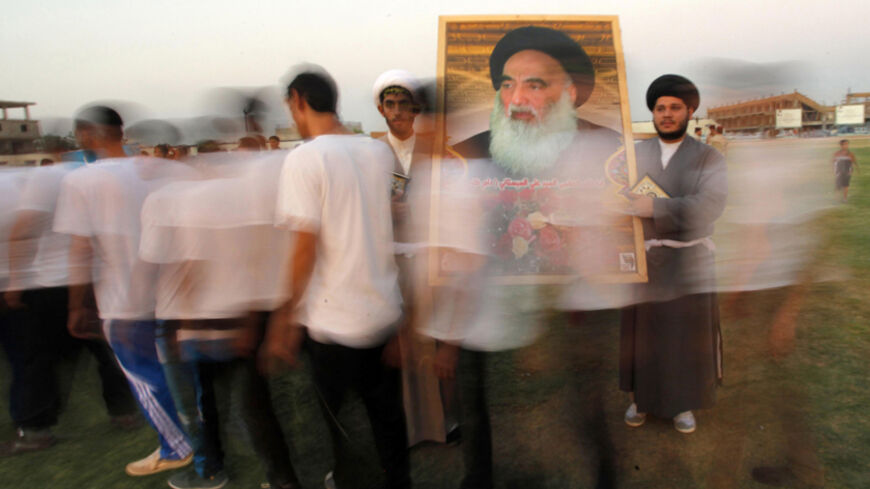 Shiite volunteers who joined the Iraqi army to fight the Islamic State group carry a picture of Grand Ayatollah Ali al-Sistani during a graduation ceremony after completing their field training in Najaf, Aug. 16, 2014. - REUTERS/Alaa Al-Marjani

Quds Force Commander Qasem Soleimani's recent media presence has raised sensitive and negative reactions in Iraq and in other countries in the region. He has had numerous photos published of himself with leaders of Iraqi Shiite militias following each success by Iraqi forces against Islamic State (IS) fighters. The viewer is to presume that the photos were taken in the battlefield, that the victory came due to Soleimani’s presence and that without him, the Iraqi army would not have been able to repel IS.

Soleimani's activities are part of a media campaign highlighting Iran’s regional strength, portraying it as a victor and the people's savior against the violence and extremism of IS. Iran has also not hesitated to play up its regional role in the nuclear talks with the West and in building ties with the United States. All this is part of Tehran's insistence that its power in the region be recognized by countries in the area and the international community.

In this context, Iran has exploited Shiite social forces, such as the religious authority in Najaf, to benefit from their stature. From time to time, Iran insists on circulating news of Grand Ayatollah Ali al-Sistani’s alleged support for the Iranian leadership or for Iran's agenda in Iraq. These usually elicit an immediate reaction from Sistani's office, because in fact, Sistani has insisted on preserving the religious institution’s independence from political conflicts between the states and among political forces.

In one such episode, Iranian newspapers published reports on Nov. 12 alleging Sistani's support for Iran's military presence in Iraq under the command of Soleimani. According to them, Sistani views Soleimani as responding to the authority’s fatwa for jihad against IS, so his presence in Iraq is legitimate. At the same time, the statement attributed to Sistani called the Western coalition’s presence a violation of Iraqi sovereignty. Some newspapers also published an image of the statement purportedly written by Sistani's office and bearing his official stamp. Iranian and Iraqi websites rushed to publish the news.

An initial comparison of the letter to those typically issued by the authority and the expressions normally used clearly reveal it to be fabricated. In addition, the stories published were all based on reporting by Harmees Press, a website apparently opposed to Iran and Sistani based on the analysis it publishes and the tones it has adopted toward them. Thus, it seems, Soleimani's media assault is being used by some parties to portray the battle against IS as the product of Iranian interference, leading some Sunnis to therefore almost reflexively attempt to justify IS' activities.

As usual, Sistani's office moved to refute the reports. On Nov. 16, it posted the following message to his website: “An official source at the office denies the news published by some newspapers and news websites that the supreme religious authority has welcomed the participation of some Iranian military commanders in the military operations against IS and that it considered them as part of the jihad. This news is completely fabricated, and no position was issued in this regard.” It also pointed out that Sistani had already expressed his position on outside assistance in Friday sermons in the holy city of Karbala: the help of brotherly and friendly countries was welcomed in the fight against terrorism as long as it was offered within the framework of the Iraqi government and without affecting the state’s sovereignty. The statement emphasized that there was nothing new in this regard.

Sistani’s positions since 2003 have strongly supported independent decision-making by Iraq, free from regional and international interference. At the same time, he has not opposed Iraq receiving assistance through the legal framework of Iraqi sovereignty as represented by the elected government. This is particularly relevant with Iraq confronting terrorist and other extremist groups that Baghdad has been unable to defeat alone.

Sistani avoids at all costs taking positions that might stir sectarianism or lead to political exploitation by parties on Iraqi soil. His response to the reports on his support for Soleimani should be seen in this light. Sistani has repeatedly stressed that Iraq needs balanced and comprehensive relationships with all Arab parties and others to prevent the country from becoming a tool of its neighbors in settling their scores. On Nov. 14 Sheikh Abdul Mahdi Karbalai, Sistani’s spokesperson, praised Iraqi politicians’ moves “toward the neighboring countries to open a new page for understanding and to restore ties in order to resolve the problems in Iraq and the region.” He pointed to the recent rapprochement between Iraq and Saudi Arabia.

The balance represented by Sistani’s position is of great importance to Iraq, which is suffering from the effects of political and social loopholes in its state building. These weaknesses open the way for foreign parties to interfere in Iraqi affairs and exploit the domestic situation in pursuit of their own political interests and regional goals.