Both militant and media efforts to undermine top Shiite cleric Ali al-Sistani are increasing, likely part of a campaign to reduce his influence and hold him and others accountable for corruption in the Iraqi government. 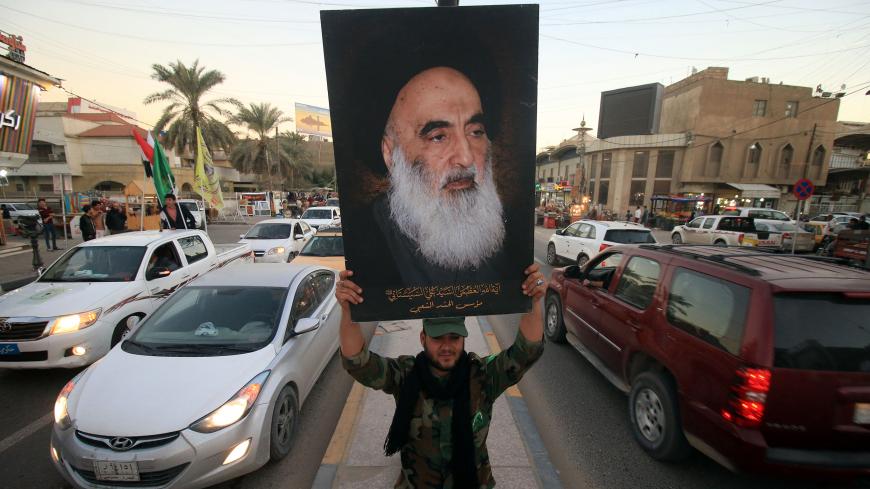 A member of the Popular Mobilization Units carries a portrait of Iraqi Shiite cleric Ali al-Sistani in a street in the southern city of Basra, Iraq, Dec. 10, 2017. - HAIDAR MOHAMMED ALI/AFP/Getty Images

NAJAF, Iraq — The Jan. 26 attack on Sheikh Abdul Mahdi al-Karbalai, a representative of top Shiite cleric Ali al-Sistani, was no surprise. Those familiar with attacks on religious authorities in Iraq believe the incident, which took place while Karbalai delivered a Friday sermon, was orchestrated by Shiite groups that defected from the Najaf authority. Karbala Gov. Aqeel al-Turaihi stated Jan. 27, “Deviant groups were behind the attack."

Some Sunni media outlets interpreted the attack as a sign that Iraqis in general, both Shiites and Sunnis, are frustrated with Sistani and sectarianism.

Sistani has faced social media troubles such as a fake Facebook account that was condemned by his office, and news articles and programs have taken aim at Iraq's religious authorities. On Feb. 12, intelligence services in Dhi Qar province raided several groups, arresting their members for activities targeting prominent clerics.

Several attacks on Sistani’s religious authority have been made over the years, starting as early as 2003. In 2012, a Sistani-affiliated cleric survived a grenade attack by an unknown perpetrator in front of a mosque. However, as Iraqis became preoccupied with the emergence of the Islamic State (IS) in 2014, the number of attacks declined before the recent resurgence.

After a period of suppression during Saddam Hussein's rule, the religious authority in Najaf enjoyed a broad public presence after the regime collapsed in 2003. Sistani then began addressing and influencing the masses' political choices and the war against IS. Now, Sistani's rivals are trying to reduce his influence and distance him from the 2018 elections.

Cleric Jawad al-Khalisi, who criticized Sistani and remained silent on the attack on Karbalai, denounced the attack on cleric Fadhil al-Badiri, who is not affiliated to Sistani.

On July 30, 2017, Iraqi security services foiled a major plot targeting the Shiite shrines of Najaf, Karbala and Samarra as well as Sistani’s home, large-scale operations that would have had a great deal of funding behind them.

In a January 2017 article, Al-Arab described the city of Najaf, where Sistani resides, as a breeding ground for corrupt religious parties. In December 2017, dozens of citizens in Najaf province called for a fatwa against corruption.

Sunni newspapers reported a dubious story Jan. 29 about Karbalai’s bodyguards killing a young man who protested Sistani’s silence about the deteriorating situation. In a clear attempt to portray Sistani as ineffective, a September 2017 article pointed out that Sistani remained silent regarding the Kurdistan referendum, during which his representative in Karbala seemed preoccupied with less important matters.

Al-Monitor tried to contact Sistani’s representatives in various Iraqi provinces for comment, but it's clear that his staff is avoiding the media. One said on condition of anonymity, “I cannot name the parties behind these attacks so long as the supreme authority does not specify any.” A staff member in Karbala told Al-Monitor over the phone that he refuses to talk to the press.

Author and political analyst Jassem al-Moussawi said of the silence, “Representatives strictly abide by Sistani’s instructions. The religious authority in Najaf is indeed subjected to a fierce defamation campaign linked to a regional agenda.”

Moussawi said the perpetrators of the attacks are “either religious groups that were once linked to the former regime and are now suffering the consequences or extremist doctrinal groups.”

Cleric and member of the Iraqi parliament Furat al-Sharaa told Al-Monitor that attacks against Sistani have increased “because he has united the Iraqis in his ability to mobilize against terrorism with the fatwa for jihad against IS. Millions volunteered to fight, which resulted in defeating IS and its stated intention to occupy Najaf and Karbala and kill Shiite religious authorities.”

He said, “The sources of these attacks were foreign but their perpetrators were local. The purpose of this agenda is to prevent the good and effective forces from wielding influence in the political process, especially the religious ones,” in reference to Sistani. Sharaa added, “The forces that want the former regime to return seek to ruin the image of the Islamic forces and authorities, believing that it will help them regain power.”