President Hassan Rouhani’s audience with Grand Ayatollah Ali al-Sistani signaled an approval of the president’s moderate positions both at home and abroad, according to Iranian media. 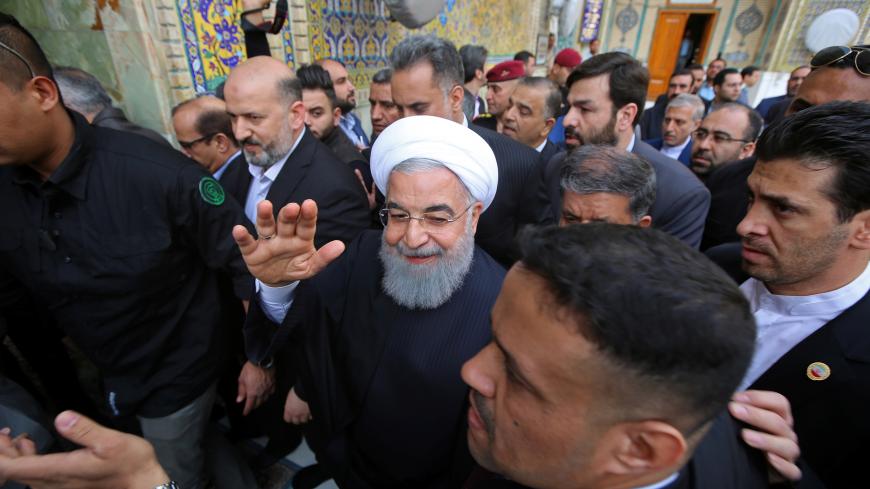 President Hassan Rouhani became the first sitting Iranian president to meet with Grand Ayatollah Ali al-Sistani, the most senior Iraqi Shiite leader, when he visited the holy city of Najaf on March 14. The meeting took place on the final day of his three-day tour of Iraq. The historic meeting received widespread coverage by Iranian newspapers and was well received by both conservative and Reformist media.

Hard-line and conservative outlets alike hailed Rouhani's cooperation with Iraq — which shares political, religious and cultural ties with Iran — rather than Europe or the United States. The hard-line Kayhan reported that Rouhani's trip "had a clear message to those who sanction" Iran. The message, according to Kayhan, was that "no one is capable of economically blockading a powerful country like the Islamic Republic of Iran." The headline: "America's anger … with the president's productive trip to Iraq." It also compared President Donald Trump's secret visit to Iraq, in which he did not meet with Iraqi officials, to Rouhani's tour, in which he met with a broad range of Iraqi figures.

Reformist media outlets praised Rouhani's ability to strengthen ties with a neighboring state. Etemad Daily covered the meeting above the fold, with a picture of Sistani facing Rouhani and Foreign Minister Mohammad Javad Zarif, with the headline in large print, “Meeting in Najaf.” Also at the meeting was Mahmoud Vaezi, the president’s chief of staff. The photos of the meeting and the president walking up the alleyway to meet Sistani quickly went viral on social media.

Reformist Arman Daily also covered the meeting on the front page, with the same picture and the headline, “Meeting of the moderate president with a moderate marja.” The headline can be taken as a rebuke of some reactionary clerics who have been opponents of the president.

The Arman article stated, “Ayatollah Sistani, because of the character and position he has, invites few people to visit with him.” The article continued that Sistani and Rouhani’s “moderate views regionally and internationally” played a large part in securing the meeting. A number of articles, including an interview with Hujjat al-Islam Mohsen Gharavian, stated that Sistani’s meeting confirmed the president’s moderate policies both politically and religiously, at home and abroad. Given Sistani’s role in unifying Iraq, the article stated that he can play a significant role in improving Tehran-Baghdad ties.

Mohammad Taghi Moybedi, a member of the Assembly of Qom Seminary Scholars and Researchers, told Arman, “The position of Rouhani compared to others who had wanted to meet with Sistani is that Rouhani is a cleric,” indirectly addressing reports that former President Mahmoud Ahmadinejad was believed to have sought a meeting with Sistani but was rebuked. On regional issues, Moybedi added, “At a critical situation when Saudi Arabia is trying to create distance between Iraq and Iran, the meeting was a necessity. Sistani is wise and determined that a meeting could neutralize the enemy’s plans.” A number of analysts, including Gharavian, also stated that the meeting with Sistani was an indirect message to Saudi Arabia that Iran-Iraq ties would remain strong.

According to a statement released by Sistani’s office, Rouhani informed Sistani of the “results of the negotiations with Iraqi officials and agreements in expanding ties.” According to the president, Iran seeks to expand trade from $12 billion to $20 billion a year.

Sistani also “welcomed steps to increase and strengthen relations between Iraq and its neighbors, the mutual interests of both countries and respect for governments and non-interference in each others’ domestic affairs.” According to the statement, Sistani also thanked “the friends of Iraq” in helping fight the Islamic State, which took over large parts of Iraq in June 2014. The Islamic Republic of Iran was one of the first countries to provide assistance and arms to both the central government in Iraq and also Kurdish forces. On Iraq’s biggest challenges moving forward, Sistani counted corruption, improving public services and keeping arms only in the hands of state bodies.