Hassan Rouhani’s first state visit to Iraq as president has ushered in a series of important economic and political accords between the two countries — but his crowning achievement was his audience with Grand Ayatollah Ali al-Sistani. 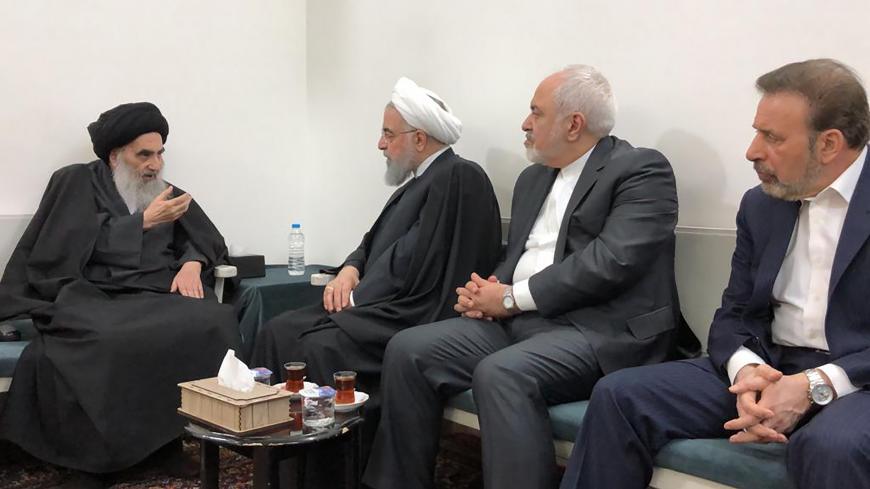 Hassan Rouhani’s state visit to Iraq was a success for the Iranian president. In terms of political and economic cooperation, multiple memorandums of understanding were signed to facilitate commerce, investment, logistical connections as well as travel between the two neighbors. Additionally, an important joint declaration has spelled out mutual commitment to implementing the 1975 Algiers Agreement and related annexes, which deal with sensitive — and festering — issues such as border demarcation.

These are major strides for Rouhani. However, the crowning achievement was his unprecedented March 13 audience with Grand Ayatollah Ali al-Sistani in Najaf — the first time that a sitting Iranian president has met with the top cleric. Sistani “welcomed any step to strengthen relations between Iraq and its neighbors as per mutual interests and on the basis of respecting the sovereignty of states and non-intervention in internal affairs." He also "expressed the necessity for balanced and moderate regional and international policies in this region to avoid further tragedies and damage." To understand the significance of this meeting, it is necessary to consider Sistani’s influence in Iran.

Last year, there were reportedly 110,000 seminary students in Iran, mainly concentrated in the holy city of Qom. According to Sistani’s office, 49,000 students at 300 seminaries in Iran received stipends from the grand ayatollah in 2013: 35,000 of them in Qom, 10,000 in Mashhad and 4,000 in Isfahan. Of note, many seminary students receive stipends from multiple clerical authorities. Moreover, there are students in Iran who receive no stipends at all. As such, it can be reasonably assumed that a significant proportion of Iranian seminary students receive direct funding from Sistani, who although long based in Iraq is an Iranian national. These networks have the capacity to be of major influence in Iran, where the prevailing Guardianship of the Jurist system — despite only demanding political and not religious allegiance from the public — relies on religious legitimacy.

Shiite Muslims tend to follow religious authorities for guidance on how to lead their lives in accordance with the faith. These senior jurists are referred to as maraji al-taqlid ("sources of emulation"). To fund charity and scholarship, they collect khums — a 20% wealth tax — as well as donations from believers. While there are no official statistics on how many followers each marja has, one groundbreaking study sheds some light on this topic.

A team from the Massachusetts Institute of Technology surveyed thousands of Iranian and Iraqi pilgrims who attended the Arbaeen pilgrimage in 2015. The annual event attracts millions of pilgrims. Those Iranians who make the trip to Iraq should not be construed as representing the average Iranian. Yet it is useful to consider that the distribution of Reformists vis-a-vis conservatives among Iranian respondents was more or less equal. Moreover, 19% of Iranian respondents were from Tehran, 12.2% from Isfahan and 11.28% from Qom; the respective figures for Iran’s population are 16.2%, 6.5% and 1.53%.

But when it comes to paying khums — being mindful that around half of interviewees declined to respond — only 22% of the Iranians said they pay it to Khamenei while the figure was 9% for Makarem Shirazi. In contrast, 11% of Iranian respondents said they pay their khums to Sistani, while 46% of surveyed Iraqis paid the wealth tax to him.

What does this data tell us? There are of course many dimensions to consider — including the consideration that religious pilgrims do not represent the broader public, particularly in Iran. Yet four broad assumptions can reasonably be drawn:

Indeed, there is a plethora of empirical data to provide evidence for all of the above. Whether it is the government in Baghdad or even US and Iranian authorities, each has learned and accepted the necessity of avoiding opposition from the supreme religious authority in Najaf.

Sistani’s paramount (and extra-constitutional) influence in Iraqi politics has been evident whether with reference to his call for participation in the electoral process in the aftermath of the US-led invasion, his views on prime ministers or even the fight against Islamic State. This influence has extended to Iranian politics, where various factions have vied for his support to boost their standing and political capital at home — particularly at times of crisis.

For instance, Sistani declined to meet with conservative Mahmoud Ahmadinejad (2005-13) during his visits to Iraq — including in 2008, the first such trip by an Iranian president. In contrast, former President Akbar Hashemi Rafsanjani, a senior moderate politician who was long the patron of Rouhani, secured an audience with Sistani when he visited Iraq in March 2009. In the summer that same year, various factions in Tehran sought to convince the grand ayatollah to back them as the Islamic Republic was mired in its worst internal turmoil since the 1979 revolution in the aftermath of the disputed re-election of Ahmadinejad. In one leaked US State Department cable, a figure close to Sistani claimed that the top cleric said he had received letters from all the main parties in the factional conflict in Iran "asking me to say what they like." Sistani ultimately remained neutral, likely partly motivated by a desire to avoid potential spillover from such a posture.

Sistani’s careful preference for pro-reform forces in Iran is also seen in his close relationship with Foreign Minister Mohammad Javad Zarif, who has since taking office in 2013 been granted several audiences with the supreme religious authority. In his first visit as foreign minister, Sistani, according to one source, said to Zarif, “I have read most of your book ‘Mr. Ambassador,’ and I value your experience and consider you deserving of your position as the foreign minister.” Iraq was notably Zarif’s first destination after being named chief diplomat.

In another sign of Najaf’s influence in Iranian politics, it should not be ignored that one of the most well-connected and powerful figures in Iran is Sistani’s personal representative, Ayatollah Jawad Shahristani. Whether it came to negotiations over who would lead the government in Baghdad or popular mobilization in the fight against the Islamic State, Shahristani has played a paramount role with access to the top leadership in Iran that is probably beyond the reach of most Iranian Cabinet members.

The influence that facilitates these powerful action channels stems partly from the complexities of familial (and political) ties: Shahristani is a son-in-law of Sistani; Shahristani also is father-in-law of Ali Khomeini, a grandson of Ayatollah Ruhollah Khomeini — the founder of the Islamic Republic.

Against this backdrop, the supreme religious authority’s decision to grant Rouhani and Zarif an audience informs Iraqi leaders that they must engage with the Rouhani administration, even if they rely on support from rival centers of power in Tehran, such as the Islamic Revolutionary Guard Corps (IRGC). Moreover, Rouhani’s achievements this week ought to have made it clear to the Trump administration and its Arab allies that Iran will neither abandon nor be kicked out of Iraq, although this should not be interpreted as Baghdad siding with Tehran over Washington.

Finally, and perhaps most importantly, the meeting between Rouhani and Sistani has provided the Iranian president with a much-needed injection of political capital at a time of crisis at home. Indeed, Rouhani has faced relentless sniping from his hard-line foes, who have been revitalized by the Trump administration’s withdrawal from the Joint Comprehensive Plan of Action.

While Rouhani’s trip to Iraq was not planned overnight, his agenda was likely impacted by present power dynamics in Tehran — and Sistani’s apparent preference for moderation and reform in Iran. This point has not been lost on rivals of the Iranian president, as seen in the initially highly polarized domestic coverage of his audience with Sistani. Thus, as Rouhani and Zarif maneuver to reassert their authority over the foreign policy of the Islamic Republic, there are several indicators to look for when it comes to their command of the regional files. These include the potential of a visit to Syria in the near future, which would also be a first for Rouhani as president.