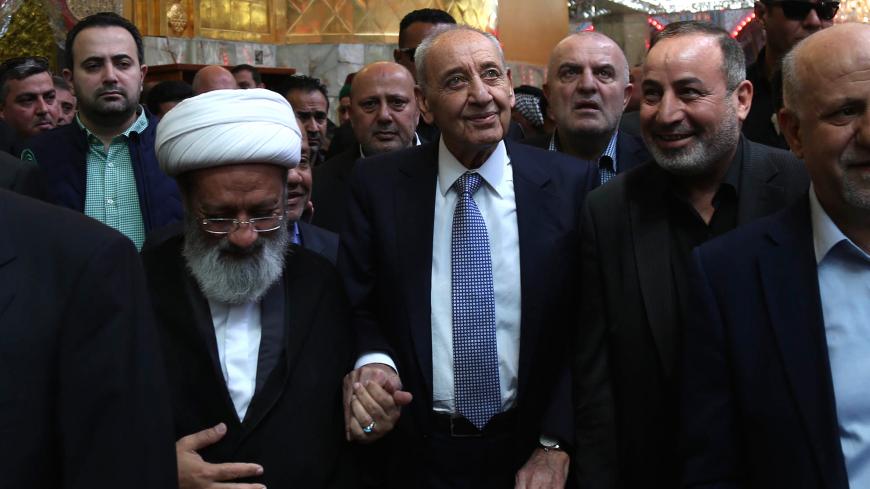 On the second day of his trip to Iraq, Lebanese parliament Speaker Nabih Berri met April 1 with Grand Ayatollah Ali Sistani, a Shiite leader known for promoting cooperation and moderate positions in the region.

Sistani told Berri, "It's important for everyone to work on establishing values of peaceful coexistence based on protection of rights and mutual respect between the different religious and ethnic components in our region, to provide security, stability, progress and prosperity for its peoples.”

After the meeting, Berri reciprocated, noting the opportunity Sistani's presence provides for the entire region: “Sistani was the first one to save [not just] Iraq, but the region, from terrorism."

Berri also met with Iraqi Prime Minister Adel Abdul Mahdi and Berri's Iraqi counterpart, Mohammed al-Halbusi. They discussed ways of enriching the countries' relationship in all aspects. Berri's visit to Iraq came after US Secretary of State Mike Pompeo's trip March 22 to Beirut. Pompeo warned about what he said are the criminal and terroristic activities of the Lebanon-based Shiite militant group Hezbollah, and raised the possibility of more US sanctions against Hezbollah and Iran.

It seems Berri, during his visit to Iraq, wanted to send the message that his Amal Movement is different from Hezbollah, and gain Sistani's support against any possible sanctions. Berri leads Amal, which is a moderate Shiite group and the rival of pro-Iranian Hezbollah. Amal was founded by the famous Iranian cleric Musa al-Sadr, who was known for his clear distrust of Ayatollah Ruhollah Khomeini, who led Iran from 1979-1989. Khomeini was an Islamist who considered the United States the "Great Satan."

Sistani met last month with reformist Iranian President Hassan Rouhani. Sistani stressed to Rouhani as well “the necessity of adopting moderate regional and international policies in this sensitive region to avoid disasters for its nations" — meaning the escalating hostility between Iran and Saudi Arabia that shakes the region at times.

Sistani always welcomes moderate Shiite figures, but declines to receive Shiite hard-liners. In the past he has met with Hashemi Rafsanjani (Iranian president from 1989-1997) and current Iranian Foreign Minister Mohammad Javad Zarif, but refused to meet with Mahmoud Ahmadinejad, who was president of Iran from 2005-2013, and Mahmoud Hashemi Shahroudi, who was chairman of the Iranian Expediency Council from 2017 until his death in December.

During a visit to Lebanon in 2004, Sistani refused to have Hezbollah leader Hassan Nasrallah welcome him at the airport. He also declined to meet with a Houthi delegation in September 2016. Iran backs the Houthi rebels in Yemen's civil war, while Iran's nemesis, Saudi Arabia, backs the Yemeni government.

Sistani always has been in favor of improving Iraq's relationship with Saudi Arabia. Unlike Iranian Supreme leader Ali Khamenei, Sistani never slams Saudi Arabia and other Sunni countries in the region. For example, Sistani avoided attacking the Saudis for executing Shiite cleric Nimr al-Nimr in 2016, and instead expressed solidarity with Nimr's family. Khamenei, on the other hand, blasted the Saudis, which led to an attack against the Saudi Embassy in Iran by pro-Khamenei advocates.

Former Iraqi President Fouad Massoum met in 2014 with Sistani and the latter praised the Iraqi government’s efforts to improve its regional relations and called for the strengthening of ties with all neighboring countries. During a visit at that time to Saudi Arabia, Massoum told then-Saudi King Abdullah that Sistani welcomed rapprochement efforts with Riyadh and stressed the importance of improving the relationship.

Since then, Iraq's relations with Riyadh have progressed. Iraqi President Barham Salih, who visited Saudi Arabia last year, said April 2, "Iraqi-Saudi relations are growing very fast." Abdul Mahdi said April 3 that a high-ranking Saudi delegation is visiting Baghdad this week and he will be heading to Saudi Arabia in mid-April. Iraqi officials are visiting regional powers regularly to improve Iraq's ties and build economic bridges in the region.

In 2014, Abdullah, in turn, praised Sistani's positions on Iraqi matters and regional issues. Saudi media, including the state-owned TV news channel Al Arabiya, have always adopted positive stances on Sistani's role in Iraq and the region. At the same time, Iranian Reformists also have been in good relationships with Sistani.

Sistani did, however, criticize Iranian interference in Iraq. He told Rouhani that Iraq's sovereignty must be respected. Sistani also criticized Iranian Quds Force commander Qasem Soleimani's public presence in Iraq during the fight against the Islamic State. Similarly, Sistani was against Iran's involvement in Syria.

In conclusion, Sistani’s approach in the region indicates he is supporting Shiite reformists, to empower them to engage with Sunni powers and international forces to reduce tension in the region and prepare for broad cooperation between all parties, bringing peace into the region.