Although there have been attempts to embroil Iraqi cleric Ali al-Sistani in the country’s ongoing political disputes, he has continued to stress his non-involvement in these issues. 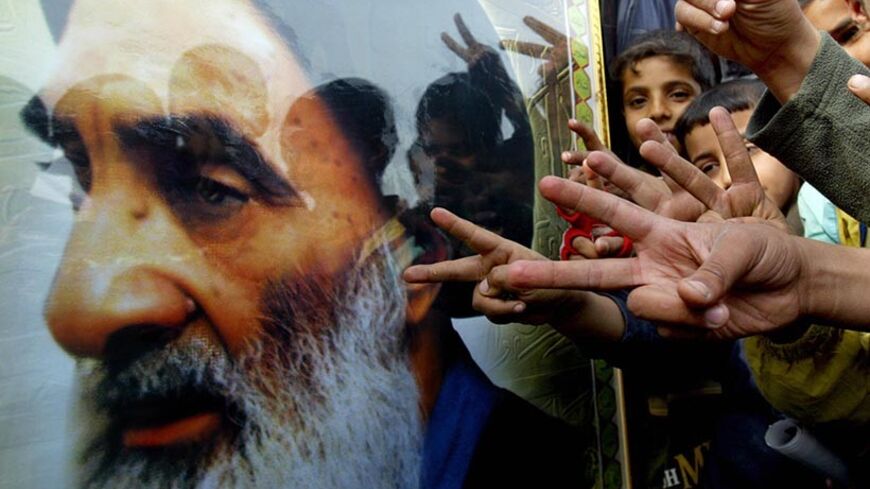 Is Grand Ayatollah Ali al-Sistani adopting a dual stance in dealing with Iraqi political issues? Does he have announced as well as unannounced views? What stand did he take vis-à-vis last month's Iraqi elections? Was he as neutral as the civil democracy (which he is still calling for) requires or has he taken the side of one party, contradicting his announced democratic principles? These are the questions at the forefront of the Iraqi political scene that have been raised within political spheres and among media outlets, behind the scenes and publicly.

To reach an objective answer to these questions, it is important to review the historical course of Sistani's unwavering position toward the Iraqi political process since 2003. In short, Sistani has not taken a partisan political stance, but has instead been content to demand that leaders abide by the will of the people through democratic mechanisms. He urged citizens to actively and consciously participate in the elections. He announced no other stance in election aftermaths.

Every now and then, political parties opposed to the democratic process take advantage of Sistani’s “hands-off” philosophy of dealing with Iraq's delicate political situation. Sistani has, however, expressed his clear and unwavering position in a collection of letters and statements published as “The Texts Issued by Sayyid al-Sistani on the Iraqi Issue.”

Sistani himself sees no point in repeating his view to counter continuous malicious attempts aimed at linking him to dubious causes, movements and political positions. His perspective was reiterated by his assistants and followers during Friday sermons in the weeks leading up to the elections. In this context, Abdel Mahdi Karbalai, Sistani’s representative in Karbala, said on April 4, “We would like to affirm what we previously stated. Amid the current situation in Iraq, there is an urgent need to change for the better. This cannot be achieved but through the citizens themselves, by adopting the general standards [Sistani] recommended. The citizens bear the responsibility, and it is up to them to make this change for the better. Whatever the decision of the citizens is, the formation of the government will take place accordingly and the legitimacy or illegitimacy of authorities will [depend] upon what you [citizens] choose.”

Ahmad al-Safi, a well-known cleric and a Sistani follower, said on April 25, during a Friday sermon at Sahn Husseini al-Sharif in Karbala, “The opinion of [Sistani] is based on the importance of effective participation and the freedom of choice in the coming parliamentary elections and on the importance of voters taking responsibility for their choices and relying on their convictions.”

This view points to two affirmations, which Sistani made sure to reiterate in the months leading up to the elections. These also apply to the formation of the government and the launch of the new parliament's work. The first affirmation considers that Sistani, representing the main reference for Shiites in the world, did not directly interfere by guiding the public toward voting for one party or dismissing another. Rather, he continually stressed the importance of voting for the honest and righteous and dismissing the bad and corrupt. This stance is dogmatic and general and cannot be considered as favoring one party to the detriment of another. It also constitutes the general framework for the post-elections phase.

The second affirmation shows that, at an early stage Sistani presented a point of view that was based on preserving the civil aspects of the state on the one hand and the non-mixing of religion and politics on the other. Sistani maintains a well-known and clear distance from politics. The margins of his engagement are limited to offering encouragement within the democratic framework of the state and insisting on the adoption of democratic practices in governance.

These two positions constitute an indisputable answer to the questions surrounding Sistani's stance toward political developments in Iraq. The attempts to disregard this point to an intentional effort to embroil Sistani in politics, which contradicts his principles and views on the historical role of religious authority in society. It is well known that the religious value of the authority does not allow the adoption of “double stances” or rhetoric. Sistani has one stance that is public and is well-known to everybody.

In any case, one cannot expect a religious authority to issue a weekly explanation stating that it is neutral in its stance on politics in Iraq and that the general framework of its paternal stewardship of the Iraqi people is limited to ensuring the preservation of the deep-rooted principles of democracy and the civil aspects of the state — a just and stable state that protects its people and treats them equally, offering equal work opportunities and respecting freedom of expression and their political choices.

Sistani will not interfere in political discussions and dialogues as long as they are taking place under the umbrella of democracy, the peaceful rotation of power, mutual respect among political powers and preservation of the future, unity and constitution of the country. This should be known by everyone and should constitute an answer to any question or doubts being spread in a bid to influence the negotiations over the formation of a government and political alliances or establishment of governance mechanisms.