How did Sistani succeed in ousting Maliki?

Grand Ayatollah Ali Sistani's fortitude, persistence and commitment to a more inclusive Iraqi democracy, along with his outreach to Iran, thwarted Nouri al-Maliki's attempt to serve a third term as prime minister. 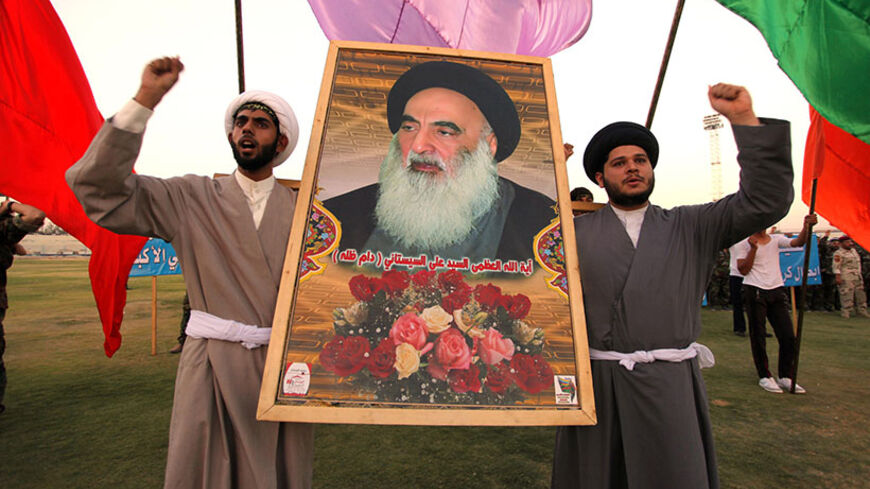 Shiite volunteers, who have joined the Iraqi army to fight against militants of the Islamic State, carry a picture of Grand Ayatollah Ali Sistani in Najaf, Aug. 16, 2014. - REUTERS/Alaa Al-Marjani

The political behavior of Grand Ayatollah Ali al-Sistani is characterized by composure, planning and continuity of work. In the past few years, he has carried out a large share of his projects through such behavior. For some time it was thought that Sistani had lost the political game to former Prime Minister Nouri al-Maliki, after the latter completely took control over internal affairs and created close ties with external actors who are influential in Iraq, in such a way that was expected to grant him another four years in power.

Maliki warned Sistani to give up on his political demands, as the latter spoke of the necessity of Maliki stepping down to create political consensus among the different components of the new government. Maliki also galvanized religious guides who are opposed to Sistani and persuaded them to directly support him. This, however, did not foil the meticulous planning of Sistani, which he has been developing for a long time to protect the democratic process in Iraq.

The role that Sistani plays is delicate and difficult and stirs, at times, controversy; there is debate as to whether religious figures have the right to take political positions in a country where the people elect representatives to take political decisions. Maliki referred to this electoral process in strongly opposing Sistani's demands. However, it is impossible to properly debate this issue without taking into account the social situation in Iraq, the course of democratic rotation of power in the country and the political work style of Sistani.

Iraq is still a collective society, in which political decisions are made by societal authority: tribal leaders, clerics and the like who have influence over political decision-making. This poses a challenge to the democratic process in the country as elections constitute a tool that influential social figures use to preserve and expand their power. It is also used to remove democracy’s true character, which stipulates that people make free decisions.

This social characteristic of Iraqi society has constituted a real challenge for Sistani, who strove to aid the democratic course without being embroiled in the political work. Such an embroilment would contradict Sistani’s principles and beliefs that Iraq should adopt a civil, nonreligious system of governance. Post-2003, Sistani tried to face this challenge by taking on the role of mediator between the people and the government on the one hand, and between the political parties participating in the government. His door was always open for all ethnic and religious components, and he closely followed up their legitimate demands. At the same time, he did not take sides as he endeavored to find a common ground between all the parties and ensure that they all participate in the governance in order to protect the country’s stability.

When it comes to the recent crisis, it would have been easy for Sistani to call for Maliki to step down through the Shiite parties in parliament that are affiliated with him, or by calling on civil disobedience which would have led to the toppling of Maliki within a few hours. Sistani, however, called on Maliki to step down and did not ask the Shiite opposition to take a strong stance that would render the situation tenser than it already was. Moreover, Sistani did not intervene in the political agreements between the parties and coalitions. He did so to avoid contradicting his principles.

Sistani, through his statements and the speeches of his deputies, insisted on national consensus. He called on Shiite parties to name a consensus candidate so that the Kurds and Sunnis would feel that the prime minister is for all. He also warned against clinging to the seat of power, especially on the part of those who are not accepted by everyone. All political parties figured that Sistani was alluding to Maliki, who wanted to impose himself on the parties who oppose him — which included Shiites, Kurds and Sunnis. On July 9, Sistani sent a letter, whose content was disclosed to Al-Monitor, to the Dawa Party, which plays a central role in the ruling State of Law Coalition, demanding the acceleration of the process of naming a consensus figure and the non-insistence on a figure that other parties oppose. The Dawa Party did not reveal this letter at the time for fear that it might negatively impact Maliki’s third term.

The efforts of Sistani prevented Maliki from monopolizing power and compelling his rivals to succumb to his will. Choosing an alternative, however, was a thorny issue due to the intransigence of Iran in supporting Maliki. An Iranian source, who spoke on condition of anonymity, told Al-Monitor that Sistani informed Iranian authorities through his office in Qom that he refused Iranian interference in choosing the Iraqi prime minister. He asked Iran not to impose pressures on Shiite parties to talk them out of naming someone other than Maliki.

The Iranian leadership was then persuaded to give up on Maliki even though Qassem Soleimani, the Iranian official who is in charge of the Iraqi issue, was still insisting on renewing Maliki’s term. This is why Ali Shamkhani, the secretary of Iran’s Supreme National Security Council, was assigned to communicate with the Iraqi parties to facilitate the naming of an alternative candidate instead of Soleimani, who previously took on similar tasks.

After an agreement was reached over the new candidate, and internal and external obstacles were lifted, Maliki was still insisting on his right to a third term. According to Al-Monitor’s sources, Sistani was ready to adopt a stronger stance in the face of Maliki’s resistance during his Aug. 15 Friday sermon. The leading members of the Dawa Party knew, through mediators, that Sistani's stance would be decisive in case Maliki clung to power, especially after a national consensus was reached on Haider al-Abadi. This led Maliki to announce he was stepping down Aug. 14, a day before the Friday sermon.

Sistani is playing the role of protector of the democratic course in Iraq. He does this by relying on the societal influence he draws from the religious power he has over a large spectrum of Iraqi society. However, this remarkable characteristic of Sistani is not guaranteed to be found in his successors.