The collapse of Maliki’s party

Outgoing Iraqi Prime Minister Nouri al-Maliki has failed to keep his party and coalition together, through his nondemocratic approaches, while the new Prime Minister-designate Haider al-Abadi vowed to preserve the national consensus. 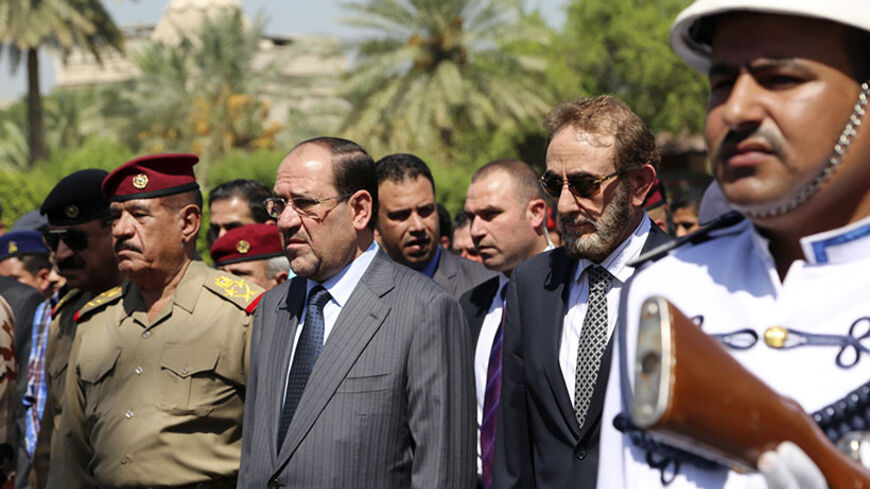 Outgoing Iraqi Prime Minister Nouri al-Maliki never thought that his strong and cohesive parliamentary bloc, the State of Law Coalition, would weaken so easily and that his internal and external allies would leave him and follow another political path. The efforts that Maliki has been deploying for many years to remain in power for a third term faded within hours. He was shocked when his fellow partisan Haider al-Abadi was designated to form a government, without his prior knowledge, which ultimately forced him to accept the loss and renounce his position on Aug. 14.

Although Maliki came to power following a democratic process, he followed a nondemocratic approach in building his internal and external relationships and coalitions. He exerted a significant effort to undermine the major competing coalitions, most notably the Iraqiya List coalition led by Ayad Allawi, which won more votes in the 2010 parliamentary elections than the State of Law Coalition. Maliki also extended his authority over the judiciary and the legislature using arbitrary methods, by limiting the powers and positions of influence to figures loyal to him within these two branches.

At the international level, he used the same method adopted by dictatorial regimes in the region, which is to scare Western countries of the rise of terrorism in the event they renounced their support for him. He has collaborated with Iran on all common files and issues between the two countries to obtain Iran’s full support. He was betting on the terrorist threat of the Islamic State (IS) to gain US and Iranian support to remain in power for a third term.

At the social level, he built extensive relationships with tribal sheikhs and businessmen through different methods, such as the use of political money, to ensure their continued support. He also put together judicial files against politicians as a means of putting pressure on them.

This shows that the alliances established by Maliki were fragile in nature and not based on real understandings and cooperation agreements between the parties participating in the political process. This justifies their collapse in a very short period of time.

This even applies to the members of his Dawa Party, who have been dissatisfied with his performance during the last year. A source from within the party told Al-Monitor, “A number of Islamic Dawa leaders criticized how Maliki dealt with the political situation and how he insisted on his positions. This would have harmed the party’s stance and prevented it from remaining in power.”

The source said, “Haider al-Abadi, designated to form the new government, was the most prominent opponent of the outgoing Iraqi prime minister. This made him gain the sympathy of the Shiite opposition, which insisted on its position against renewing Maliki’s term. Moreover, Abadi was not involved in any prominent executive action that might have stirred criticism by various Iraqi political entities. He is not accused of corruption or involvement in any repressive action against the Iraqi opposition with its various entities.”

On the Iranian side, Maliki was counting on the support of Qasem Soleimani, commander of the Quds Force, hoping that Soleimani would change the course of things in such a way that mitigates the recent obstacles faced by him. However, it seems that the Iranian side changed its mind at the last minute for two reasons: the tough stances of Ali Sistani and the Shiite opposition, and the shift in the path of IS toward Iran. IS clearly got the US message: the Kurdistan Region is a US red line that IS cannot cross. Therefore, immediately after the US Air Force strikes, IS headed toward the Iranian border and took over the town of Jalawla, 115 kilometers (roughly 71 miles) northeast of Baghdad, moving toward Khanaqin, which is only 20 kilometers (roughly 12 miles) from the Iranian border.

Finally, based on the experience that Maliki had, Abadi must build comprehensive national understandings bringing together Iraqi sectors with respect to Iraq's general direction. He must also open up to international and regional parties in a balanced manner that preserves Iraqi national interests, instead of putting together fragile coalitions based on unlawful methods and which are likely to crumble at any given moment, as was the case with Maliki. This is what the Shiite alliance expects from Abadi. The latter had made guarantees to this alliance that as a new prime minister, he would preserve the national consensus and refrain from autocracy.