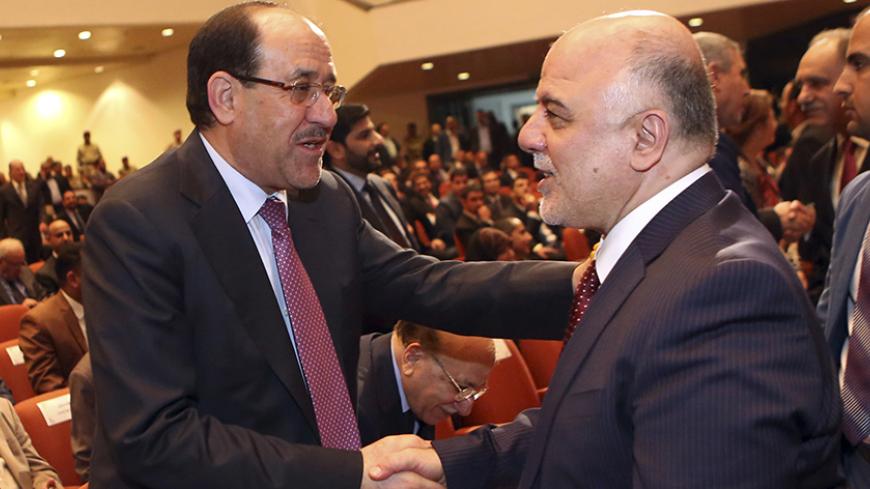 NAJAF, Iraq — Iraqi Prime Minister Haider al-Abadi is facing stiff opposition from within his parliamentary bloc, the State of Law Coalition led by former Prime Minister Nouri al-Maliki. So far, this group has achieved the sacking of two ministers, each of whom importantly contributed to the current hardships of Iraq.

Defense Minister Khaled al-Obeidi was dismissed on Aug. 25, and confidence was withdrawn from Finance Minister Hoshyar Zebari on Sept. 21. Talk is now growing louder in the parliament corridors that Foreign Minister Ibrahim al-Jaafari will be questioned in parliament and eventually dismissed. More dismissals may follow.

On the other side, Abadi is trying to tighten his political alliance to enhance his position against Maliki and avoid being dismissed by the parliament. Kurdistan Regional Government (KRG) spokesman Safeen Dizayi announced on Sept. 27 that President Massoud Barzani had accepted Abadi's invitation to visit Baghdad to discuss the post-Islamic State (IS) future of Iraq and the disputes between Baghdad and Erbil. The first visit in five years of frosty relations between the KRG and the government in Baghdad kicked off today, Sept. 29, and after meeting with Abadi, Barzani reported that all the disputed issues between Erbil and Baghdad have been "resolved."

In a statement to Rudaw on Sept. 22, Zebari said, “Parliament Speaker Salim al-Jabouri, in collusion with the State of Law Coalition, dismissed me” as part of a scheme “implemented by Maliki, out of motives of hatred and revenge, to thwart the current government. Jabouri is involved in this game.” He added, “The Maliki project is using parliament and its speaker to achieve illicit goals. Yet this scheme would ultimately be Jabouri's end.”

The pro-Maliki bloc did not hide its anger at Abadi nor its desire to see Abadi be replaced with Maliki. Parliamentarian for the State of Law Coalition Haitham al-Jabouri, who is also the spokesperson for the Reform Bloc and the one who requested to question Zebari in preparation for his dismissal, told Al-Ghad Press on Sept. 10, “Abadi has failed to manage the country and to fulfill his promises.”

He added, “He has reached the stage of not being able to lead the country.” He also talked about his bloc's intention to expand the circle of questionings and confidence votes to include the prime minister himself. The Reform Bloc spokesman described Maliki as “the country’s No. 1 leader.”

A source within the State of Law Coalition who asked not to be named told Al-Monitor that the coalition is in no hurry to withdraw confidence from Abadi. Yet Abadi’s key ministries will be gradually brought down, which would hamstring his Cabinet, reduce his chances for a second term and thus pave the way for the nomination of his rival, the source added.

In a press interview on Aug. 27, Kamel al-Zaidi, a member of the parliamentary legal committee and leader in the Dawa Party, described Maliki as a statesman and said that Abadi is managing the state unprofessionally.

Maliki’s bloc also criticized the Sadrists and the Islamic Supreme Council of Iraq, which played a role in Abadi’s accession to the post of prime minister and Maliki’s sidelining in 2014.

The rivalry between Abadi and Maliki is nothing new, as Abadi showed up as a competitor for Maliki in 2006 and 2014, when the scales were tipped in favor of Maliki. He was not happy with Abadi being named prime minister in August 2014. He had strongly opposed his nomination and filed an appeal in the Federal Court, naming himself as more qualified for the post. However, he gave up a few days later.

The struggle continued with Abadi removing Maliki from the post of vice president in August 2015 as part of the political reforms. In return, Maliki criticized the Abadi government’s performance and said that he was willing to return to power on several occasions, including an interview with the BBC in July.

Maliki receives unlimited support from Iran, which enjoys the strongest regional influence in Iraq. Supreme Leader Ayatollah Ali Khamenei praised Maliki’s role in Iraq in several meetings between them, which he has never done with Abadi. Sources within the National Alliance, which unites the Shiite forces including Maliki and Abadi, have been reported as saying that Iran is pushing for Maliki to be nominated for prime minister in the elections scheduled for 2018.

Maliki also has strong and special ties with the Popular Mobilization Units (PMU) that grant him additional influence on the country’s political and security scenes. Abadi is trying to curb this influence by formalizing the PMU and placing the force under direct government control. On July 26, Abadi ordered the PMU be turned into an independent military formation under the direct control of the commander-in-chief of the armed forces.

The Aug. 28 decision by the Independent Electoral Commission to ban the PMU from taking part in the upcoming elections worked to Abadi’s advantage, as the commission confirmed that the PMU are affiliated with the state and under his command.

Abadi also has strong ties and support from the United States, which has greatly contributed to his government's recovery of territories captured by IS, after having ignored Maliki’s repeated calls for assistance to deter and halt IS expansion over Iraqi territory in 2013 and 2014.

The United States did not support Iraq even after a third of its territory fell into IS' hands, but rushed to do so when Maliki stepped down from power. This reluctance was widely interpreted as President Barack Obama's unwillingness to support Iraq under Maliki's rule.

Whether Maliki will succeed in bringing down Abadi and replacing him as prime minister depends on how political affairs are arranged in the post-IS era, which will be affected by many regional and international factors, not least among them the Iraq policy of the next US president.