Two Iraqi Shiite coalitions — one favored by the United States and the other by Iran — are competing hard to gain a majority in the parliament to form the next government. 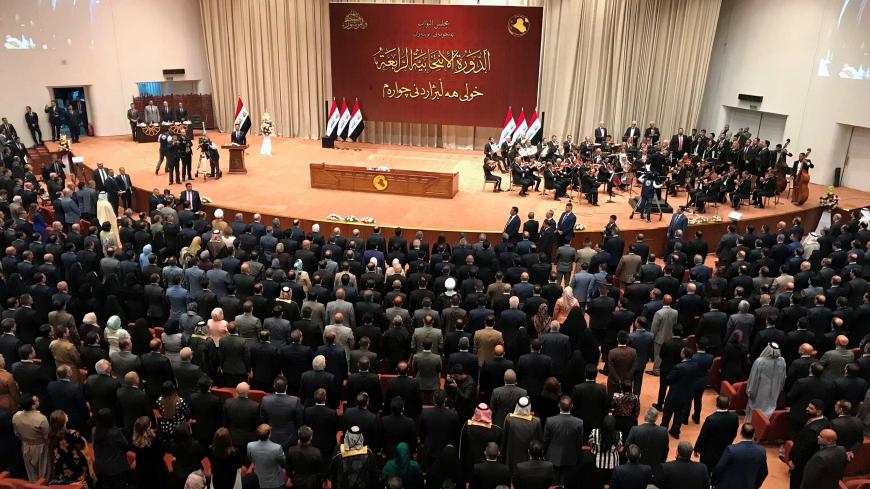 Iraqi lawmakers are seen during the first session of the new Iraqi parliament in Baghdad, Sept. 3, 2018. - REUTERS/Maher Nazeh

Newly elected Iraqi legislators, unable to even determine which alliance of parties holds the most seats, on Sept. 4 postponed their vote on a new speaker until Sept. 15. The constitution calls for electing a speaker before a new government can be formed.

The main Shiite forces in the country are fighting over the post of prime minister, indicating a potential row between the pro-Iran side and the one supported by the United States.

On the US side, two bodies — the Nasr coalition led by current Prime Minister Haider al-Abadi, and the Sairoon party led by Islamist cleric Muqtada Sadr — announced Sept. 2 that they had formed a partnership with 180 members, making them the largest group eligible to form the government; 165 seats are needed for a majority.

Within hours, however, the rival pro-Iran group led by Vice President Nouri al-Maliki and Badr Organization militia leader Hadi Ameri announced they had secured the votes of 145 parliament members, and claimed some of them had defected from the Abadi-Sadr grouping, possibly removing this coalition's stated majority.

As the numbers remained in question, only 85 of 329 parliament members attended the Sept. 4 meeting, so the discussion about choosing a speaker was postponed.

According to Abadi's office, Fayad was dismissed because of his “involvement in political and partisan action, which goes against the critical security tasks he is entrusted with.” But Fayad had been an Abadi ally and founded the Ataa movement, a political party that campaigned in the May parliamentary elections as part of Abadi's Nasr list. Apparently, Abadi didn't mind Fayad's political involvement until reports surfaced that Fayad was switching his loyalties to the Fatah Alliance.

There have been leaked reports that a considerable number of members withdrew from the Nasr list to join the pro-Iran rival front that includes, among others, Ameri's Fatah Alliance [of which the Badr Organization is part] and Maliki's State of Law Coalition.

Hanan al-Fatlawi, an ally of the Fatah Alliance, confirmed Aug. 30 that Fayad had join the Fatah front. A couple of hours into Abadi's decision to dismiss Fayad, the alliance alleged that Abadi took that action because Fayad isn't in favor of renewing Abadi’s term. It claimed Abadi's action was made to settle a personal grievance and therefore was illegal.

Of note, the Fatah Alliance consists of pro-Iran parties that make up most of the PMU.

Another possible indication of the differences plaguing Abadi’s list surfaced in leaked news reports that some leaders in Abadi's Nasr list will nominate Fayad for prime minister. The Nasr list denied that claim in an Aug. 31 statement, but some leaders subsequently issued another statement Sept. 2 expressing their discontent with Abadi’s leadership. These leaders alluded to their joining the Fatah Alliance and the State of Law Coalition by saying, “We are all for the biggest representation of political forces and for a national lineup.”

On the same day, Abadi confirmed that Fayad doesn't represent the Nasr coalition and that Abadi would sue Fayad if he tried to speak on behalf of the coalition.

The Fatah Alliance/State of Law Coalition partnership accuses Abadi of receiving US support, saying this would disqualify him for the post of prime minister.

Ameri’s bureau issued a statement Aug. 30 saying he had met with Brett McGurk, the US special presidential envoy to the international coalition fighting the Islamic State (IS), and told him, “If you insist on interfering, then we shall deem any government you [help] form as a collaborating government and we shall seek to overthrow it within a matter of two months.”

The Shiite differences in the lead-up to forming the new government aren't limited to ministerial posts, as they have gone so far as to include PMU military commanders.

A row broke out between Abadi and PMU deputy head Abu Mahdi al-Mohandes, who is known for his close ties with Qasem Soleimani, leader of Iran's Quds Force. The United States considers Mohandes a terrorist.

In early August, Mohandes had issued two orders without Abadi's approval. On Aug. 21, Abadi annulled those directives. The first order was to withdraw PMU forces from the mostly Sunni provinces of Anbar and Ninevah; those forces had remained after full-scale operations against IS ended. The order also was to have moved the brigade stationed in Sinjar to an undetermined location. The other directive was to remove PMU brigade headquarters from cities in those areas and disconnect the brigades from institutions, including holy shrines. The PMU brigades affiliated with such shrines are close to Abadi and were strongly dissatisfied with Mohandes' order.

International reports say the PMU decisions were made to satisfy the Sunni blocs and annex them to the partnership between the Fatah Alliance and the State of Law coalition.

Following the prime minister's order repealing Mohandes' decisions, rumors spread that Abadi had also suspended Mohandes’ powers. This led important PMU factions to issue threats against Abadi, as he is the commander of these forces under a law parliament passed in 2016.

On Aug. 29, Abu Ali al-Askari, a security official in the PMU faction Hezbollah Brigades, called the “attempt to exclude” Mohandes “an open-ended conflict.” Ali al-Husseini, spokesman for PMU forces in the north, said the same day that the forces don't allow any encroachment upon Mohandes' authority, no matter the source.

These developments and threats predict an armed clash between Shiite factions. The Institute for the Study of War warned Aug. 28 of bloody clashes if attempts to form a government come to an impasse.

For his part, Maliki said in a Sept. 1 statement that if “foreign interference” doesn't stop, internal fighting is likely to take place and “won't spare anyone.”

Addressing Abadi, Maliki added, “It's unfortunate that people who have shared the same path and the same fate are heeding foreign schemes that seem supportive but are actually devious and deceitful, as they well know.”

As the formation of the new government draws near, personal and partisan disputes, as well as differing foreign influences in the Iraqi political arena, are surfacing, thus dragging Iraq further into a cycle of complex and intertwined conflicts that have long stricken the country.