As the escalation rises between Shiite parties over the formation of the new government, the pro-Iranian factions in Popular Mobilization Units show strong objection against Abadi second term. 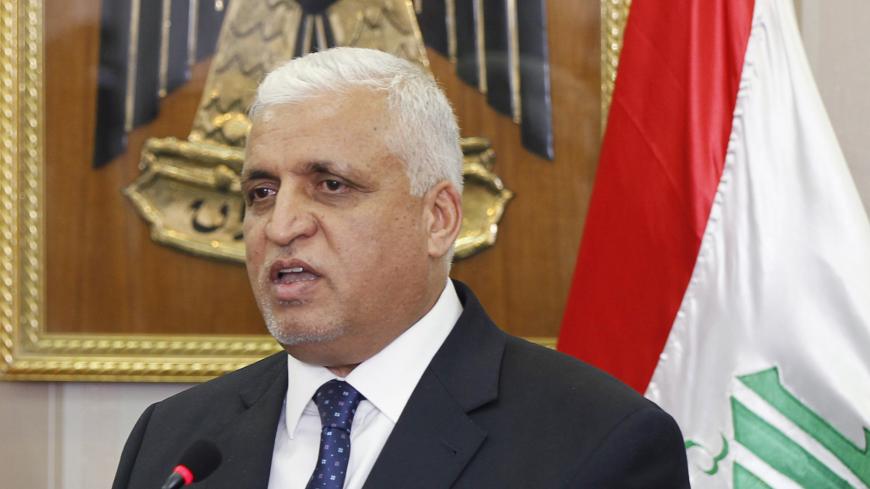 Faleh al-Fayad, Iraq's national security adviser, speaks during a joint news conference with an Iranian official in Baghdad, Aug. 8, 2012. Fayad was dismissed last month from his national security post and as head of the Popular Mobilization Units by Prime Minister Haider al-Abadi after Fayad announced his political support for a group that seeks to supplant Abadi as prime minister. - REUTERS/Mohammed Ameen

The Popular Mobilization Units (PMU) are witnessing differences between a current loyal to Iran and another loyal to Prime Minister Haider al-Abadi and close to Iraq's supreme religious authority, Ali al-Sistani. The dispute has recently escalated following the ongoing conflict over the formation of the next government.

Eleven pro-Iran PMU factions, including Asaib Ahl al-Haq, the Hezbollah Brigades, the Badr Organization and Saraya al-Kharasani, issued a statement Sept. 5 condemning Abadi's move to form the largest bloc with the Sairoon Alliance led by Muqtada al-Sadr and a number of other political parties. This comes after Abadi took the decision to dismiss PMU head Faleh al-Fayad due to his support for the PMU Fatah Alliance as this backing was deemed an illegal political intervention on the part of a security official.

The statement said the signatory factions affirmed their “rejection of a government formed by al-Sabhan and McGurk.” Thamer al-Sabhan is the Saudi state minister for Arab Gulf affairs and Brett McGurk is the US special presidential envoy to the international coalition fighting the Islamic State. The factions said they would not allow this “despicable conspiracy to pass” and added that they “fiercely condemn the illegitimate presence of any foreign forces in Iraq. These shall be dealt with as occupying forces.”

For its part, Al-Hayat newspaper published a report Sept. 5 showing rebellion on the part of a number of PMU factions against Abadi in the wake of his dismissal of Fayad and following news that pro-Iran PMU deputy head Abu Mahdi al-Mohandas’ powers had been frozen. The United States considers Mohandas a terrorist.

On the other hand, other factions, including Al-Abbas Combat Division, which is affiliated with the supreme religious authority, are still under Abadi's leadership and have not interfered in any political affairs and conflicts, unlike the aforementioned 11 factions.

Meanwhile, a verbal altercation broke out between Mohandas and Sheikh Maitham al-Zaidi, the leader and general supervisor of Al-Abbas Combat Division, due to Mohandas’ apparent lack of fair distribution of the budget and weapons among PMU factions.

Nizar Habal al-Matin, the secretary-general of the Imam Ali Holy Shrine, in May 2016 accused Mohandas of commandeering Al-Imam Ali Combat Division and clamping down on its fighters. The division is close to the authority in Najaf.

Matin called on the prime minister to replace Mohandas, as confirmed by Abbas Abu Tabikh, the commander of Al-Imam Ali Combat Division, in February 2017.

In the past few months, several explosions targeted weapons warehouses belonging to parties in the PMU. The fact that the targeted parties are not close to Iran raised doubts about pro-Iran factions’ role in these explosions.

At an important press conference held Aug. 20, Zaidi accused entities he did not name of targeting weapons and ammunition warehouses in a bid to “destroy and weaken the military infrastructure of Al-Abbas Combat Division.”

Zaidi said that in less than a month, Al-Abbas combat division materiel was targeted four times as "non-friendly drones were hovering in the sky and got detected by our own devices and radars. The official authorities said the planes did not belong to any friendly or well-known parties.”

Hasan al-Hajjaj, the director of the Tactical Cell, an independent group of activists and military personnel involved in monitoring military events in Iraq, told Al-Monitor that Al-Abbas Combat Division was not the only one in the PMU whose stores were targeted.

“Seven weapons and ammunition warehouses belonging to different PMU bodies were targeted between early July and mid-August,” he said.

He added, “When the first explosion took place, people thought it was due to poor storage, as the explosion occurred in a weapons warehouse in Husseiniya in Baghdad’s Sadr City and belonged to an armed group affiliated with Saraya al-Salam group, which is affiliated with Sadr. However, the recurrent explosions that kept taking place over a short period and the targeting of the Fajr regiment, which is close to Ammar al-Hakim and the two Imam Ali and Al-Abbas Combat Divisions, which are affiliated with the [Shiite religious] authority, created doubts about whether these explosions were deliberate and not due to poor storage.”

All these affected units have something in common, which is that they are not close to Mohandas. This led to doubts about the possible involvement of pro-Iran bodies trying to destroy the Shiite factions that did not follow Iran's foreign policies in the region exemplified by the “axis of resistance.”

Naim Aboudi, the spokesman for Asaib Ahl al-Haq, denied that pro-Iran factions had any role in the explosions, and told Al-Monitor, “The purpose behind these accusations is to create problems within the PMU. Ever since the Islamic State emerged, such scenarios have been recurrent with the aim of creating strife.”

In light of these developments, the PMU is expected to witness sweeping changes and dismissals that will depend on whether the next government will be pro-Iranian or independent.