Brigades close to top Shiite cleric Grand Ayatollah Ali al-Sistani announced the formation of a mobilization force affiliated with the chief of staff of the Iraqi armed forces, rather than Iran. 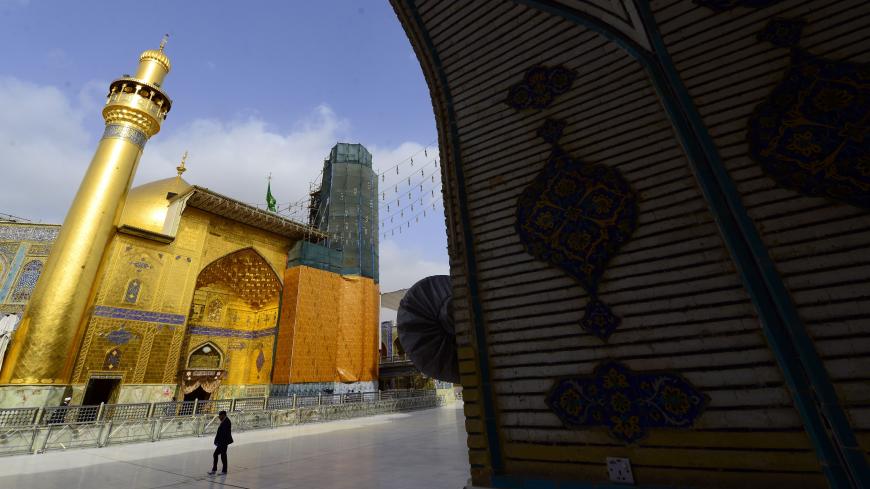 Four factions of the Popular Mobilization Units (PMU) recently met at the Imam Ali Shrine in the holy city of Najaf and said they planned to leave the PMU and more directly associate themselves with the Iraqi government. Here, the usually busy shrine is pictured empty on March 18, 2020, amid the coronavirus pandemic. - HAIDAR HAMDANI/AFP via Getty Images)

The final statement of the conference carried a harsh tone against corruption and militias’ exploitation of the war against the Islamic State for personal and factional interests.

The four factions are Liwa Ansar al-Marjaiya, Liwa Ali al-Akbar, Firqat al-Abbas al-Qitaliyah and Firqat al-Imam Ali al-Qitaliyah. They had previously asked to get detached from the Popular Mobilization Units and instead be affiliated with the Iraqi Defense Ministry, as a part of integration into the state forces.

The four factions declared themselves under full control of the state, demanding to be separated from the PMU and instead be directly connected with Iraq's prime minister, the country's commander in chief.

The final statement was released three days after the “shrine units’ conference” in the Imam Ali Shrine in Najaf, where Sistani lives. The conference was a surprise for the remaining armed Shiite factions, be they under the wing of the PMU or outside of it.

An official in the shrine units told Al-Monitor on condition of anonymity that they were working to separate organizations that supported the Iraq government from factions and political parties that follow the interests of another state. This was a reference to Iran, which is accused of controlling the PMU.

He told Al-Monitor, “Some of the armed factions inside the PMU took advantage of Sistani’s fatwa to adopt entities parallel to the state entity and forces parallel to its regular troops. They also exploited the capacities of the PMU and its power in political affairs and were implicated in crimes of corruption and murder.”

The fatwa the official was referring to was Sistani's call upon volunteers to join Iraqi official security forces after the Islamic State seized Mosul and other parts of Iraq in 2014.

The official added, “The separation project was on the table, even before the killing of deputy head of the PMU, Abu Mahdi al-Muhandis [in January 2020], but it was delayed when he was killed." The official said other PMU militias have been ignoring the shrine factions' demands to have the PMU under state control and have not been giving the shrine militias a chance to participate in the PMU decision-making process. He said an exacerbating factor was the designation of the Kataib Hezbollah leader known as Abu Fadak as the PMU chief of staff.

“The recent conference was a reaction to the ongoing chaos, including the illegal measure that PMU chairman Faleh al-Fayadh, who is not favored by Najaf, took by installing Abu Muntadher al-Husseini … as secretary of the PMU,” the official said.

The shrine factions' official also spoke about “the imminent withdrawal of their forces from the PMU for good, unless the government and political forces pay attention to the signs of the shrine units united with Sistani.”

Yazan al-Jabouri, who leads a Sunni PMU brigade, told Al-Monitor, “This is a Shiite-Shiite dispute between the shrine units and the loyalist [pro-Iranian] units. We are the state’s units, and we are not part of the dispute. We did not fight for a religious fatwa, but we fought to liberate our areas, and we found in the PMU a legal umbrella for our military presence.”

He mentioned “problems within the PMU,” adding, “These problems threaten the future of the PMU because the risks are internal rather than external.”

Officials in the shrine units accused factions that are loyal to Iran and that follow Iranian Supreme Leader Ayatollah Ali Khamenei of pursuing riches and their own interests.

The shrine factions' move to associate themselves with the government had been expected, particularly since the four militias had closely cooperated with the chief of staff of the Iraqi armed forces during the battle against the Islamic State, and were also known for not committing human rights abuses.

Mahmoud al-Rabihi, a spokesman for Asaib Ahl al-Haq, which is accused of loyalty to Iran, told Al-Monitor, “Talking about more than one PMU is unacceptable and violates Iraqi law. Sistani did not make any reference to such a divisive description. Sistani refuses to be affiliated with one party because he is there for all the units, all Iraqis and every believer in all countries of the world.”

Rabihi added, “Stirring this issue does not please Sistani, who has been known to be the father of all. Some want to be affiliated with the general leader or the Defense Ministry, and they have their reasons and motives, which we think will not divide the … PMU.”

Adel Badawi, a professor of political science at the University of Baghdad, told Al-Monitor that the separation of the shine units from the PMU could reduce the legitimacy of the factions loyal to Iran.

It seems highly likely that the shrine factions' push toward separation from the PMU occurred with the knowledge or even instruction of Sistani. Such a conference likely could not be held in the Imam Ali Shrine without the approval of Sistani, who directly oversees it; it also is just steps away from his residence.